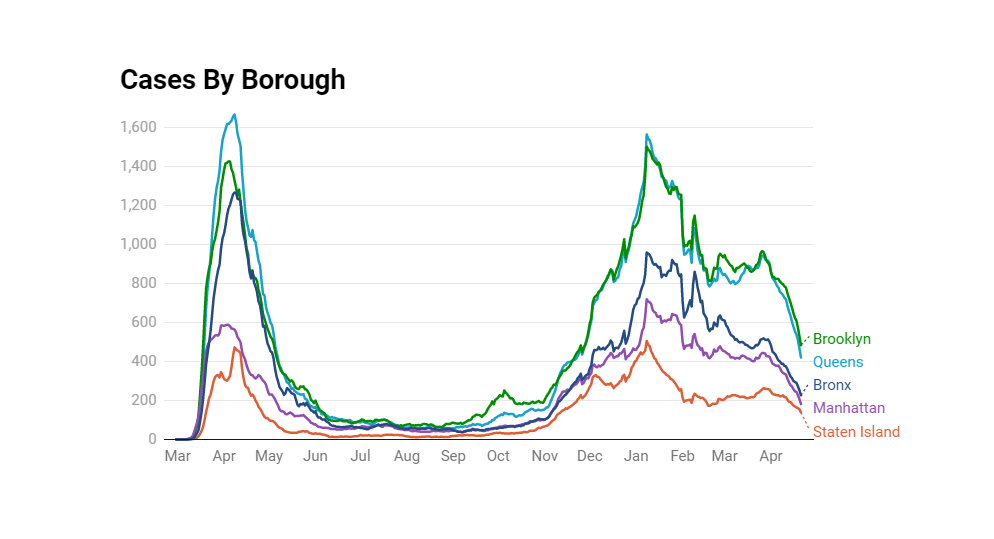 The delays speak to the vast disparities that can emerge while controlling a pandemic through vaccination, and buried within this history are lessons for New York City. Whenever smallpox vaccines began to control an outbreak in a region, certain demographics or geographical areas got left behind—leaving the door open for resurgences.

New York City is turning the corner on COVID-19, undoubtedly thanks to the vaccines. After plateauing from mid-February through March, case rates are plummeting. The seven-day average for new cases is below 2,200 for the first time since late November, just after the second wave started. This drop isn’t due to fewer tests being performed, as those numbers are stable. Hospitalizations and deaths are low, too.

But there are worrying signs that interest in the COVID-19 vaccines has hit a wall. The pattern opens questions about whether the city has made enough progress against the disease to reopen safely—or whether the virus will thrive again in unvaccinated areas once unvaccinated people begin mixing again.

“We’re starting to trend the right way with declining cases in the last few weeks, but we need to kick the virus out the door,” Jeffrey Shaman, an epidemiologist at Columbia University’s Mailman School of Public Health. “High rates of vaccination is key to making that happen.”

To track demand for the COVID-19 vaccines, the Gothamist/WNYC health team has been closely following the number of first doses given each day. When a new person wants the vaccine, they get either their first shot of Moderna or Pfizer or the single-shot from Johnson & Johnson, whose temporary pause was lifted on Friday.

Daily first doses have cycled up and down during the rollout, which makes sense when you consider how access to appointments, eligibility and vaccine sites evolved over time. Interest began skyrocketing in late February after the Biden administration made good on a pledge to increase weekly allotments and the Johnson & Johnson shot received emergency authorization. The seven-day average went up to 50,000 jabs. After that, it tailed off because that’s what typically happens during vaccine campaigns. Eager early birds book their appointments immediately.

“You’re going to get the people first who are very interested in getting vaccinated,” said Bruce Y. Lee, a public health policy expert at the City University of New York and executive director of Public Health Informatics, Computational, and Operations Research. “Then after the initial people get the vaccine, you might have other people who were saying, ‘OK, I feel like I see a number of people are getting the vaccine, and maybe I should get the vaccine, too.’”

After this rush, the demand dipped until March 30th, when eligibility opened for everyone over 30. That was also about a week before Governor Andrew Cuomo granted universal access to anyone older than 16. Enter another flock of early birds—millennial and Gen Z takers, this time. The average daily demand peaked at 47,000 shots by April 11th.

The first-dose tally then drops off a cliff. Part of the dive ostensibly revolved around the federal pause of the Johnson & Johnson vaccine on April 13th, as the mayor indicated on Friday’s episode of The Brian Lehrer Show.

“Look, we got a curveball thrown the last few weeks with what the federal government did with Johnson & Johnson. That was not part of our plan. It didn’t help at all,” the mayor said. “But we still have two full months to go. And we finally have a situation where we have enough supply.”

That’s true. The Johnson & Johnson pause immediately interrupted key programs, such as in-home inoculations, the city’s vaccine bus, an effort for Islamic communities and shots for state prisoners. And since the pause, New York City has still received about 431,000 first doses of Moderna and Pfizer vaccines, according to data from the Centers for Disease Control and Prevention.

But the decline in first takers started before the pause and continued through Saturday, when the average landed below 22,000 for the first time since late February. According to the mayor’s office and the city health department, the last seven days of data are always provisional because it takes time to collect information from all the vaccine sites, so the final numbers may be slightly higher.

An absence of appointment seekers could explain why the city suddenly pivoted to walk-ups on Friday. The official reason, the mayor cited, involved the successful piloting of a no-appointment system for adults older than 50.

But Gothamist/WNYC obtained data from TurboVax, a popular appointment aggregator, that showed a steep decline in traffic to the website, starting in early April and continuing ahead of the walkup announcement. Lines for the COVID-19 vaccines are also shortening nationwide, according to The New York Times, leading the federal government to close some of its large-scale hubs.

Huge swaths of the city remain unvaccinated. Look at vaccine rates in Brooklyn, and you’ll find neighborhoods—including Bed Stuy, Crown Heights, Brownsville, Canarsie—where fewer than 1 in 5 residents are fully vaccinated. The same goes for Harlem in Manhattan as well as pockets of the Bronx, Queens and Staten Island. Vulnerable age demographics—namely people over the age of 65—are only about 42% to 58% fully vaccinated, according to the city’s data.

And while the rollout’s shortfalls among people of color have improved by a few percentage points, Black communities appear to have hit a plateau in recent weeks. The income disparity has steepened–aka worsened–relative to early February.

“In NYC, we would really benefit from getting more of the elderly and vulnerable vaccinated ASAP,” said Shaman of Columbia University. “PSAs, work with communities, we need these efforts to elevate demand and administration of the vaccine.”

Those trends could threaten the mayor’s goal of fully vaccinating 5 million people by June. The city is going into the final week of April armed mostly with Pfizer and Moderna shots. Those options require two doses, separated by 3 to 4 weeks. Through Saturday, 3.3 million New York City residents had received one shot, and of those, 2.2 million were fully vaccinated.

So right now, the city is only a third of the way to its target. Add the 1.1 million who are currently committed to second doses, that’s only half of the city’s adult population. Assuming the Johnson & Johnson deliveries don’t immediately surge due to its manufacturing struggles, vaccine sites in New York City would need to give first shots to about 1.7 million adults over the last six days of April and May’s opening week to confidently hit their 5-million-person target by June 1st. The city recorded about 300,000 first shots per week during early April, but this tally dropped to 160,000 last week.

The New York Times reported Sunday that millions of Americans are skipping their second doses, and New York City’s data suggest a sharp drop, too.

Scientists and health officials have said individual populations might reach herd immunity against coronavirus when about 70% to 80% of the population is protected. Those shields can come from natural infection or the COVID-19 vaccines. In Israel, the director of the country’s largest hospital stated herd immunity might have been achieved with 56% of the full population vaccinated and 15% recovered from the coronavirus. Disease modelers at University College London predict a similar benchmark for the United Kingdom.

As of Sunday, New York City sits at 27% fully vaccinated and about 10% recovered.

“We talk about herd immunity, and we want to get it to 75, 85% of the population has been vaccinated or maybe vaccinated and infected previously; preferably vaccinated,” Shaman said. “But it doesn’t mean we’re at the end of this whole thing.”