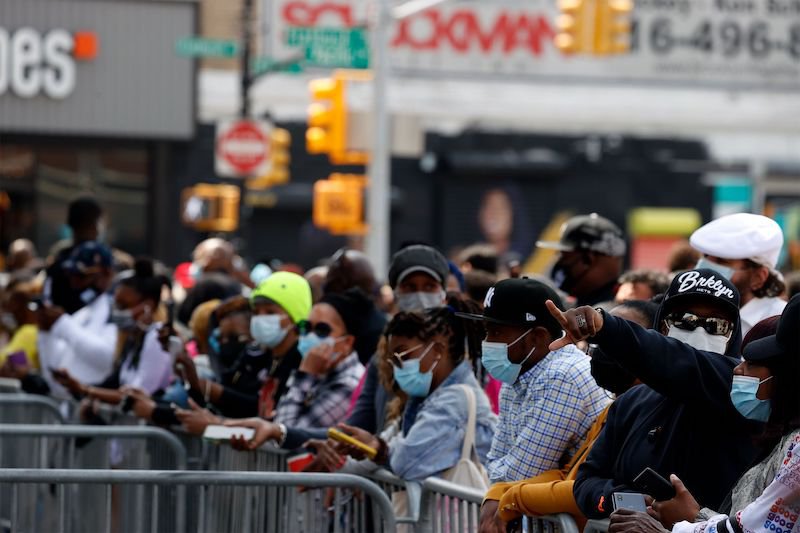 A procession of the Ruff Ryders rap group, hundreds of motorcyclists and a monster truck bearing a red coffin reportedly carrying DMX’s body converged at the hip-hop artist’s memorial at Barclays Center Saturday afternoon, where they were met with scores of fans.

Emblazoned with the logo “Long Live DMX,” the monster truck — along with the Ruff Ryders and many of the motorcyclists — began their procession called “The Ruff Ryders 2 The Rescue: Ryde 4 Life,” in Yonkers, where DMX grew up.

The iconic rapper, whose real name was Earl Simmons, died April 9th at White Plains Hospital, a week after he suffered a heart attack and apparent drug overdose. He was 50 years old.

The procession then traveled down to Brooklyn where the memorial at Barclays Center is slated to begin at 4 p.m.

The memorial is only for invited family and friends and not open to the public, but will be streamed on DMX’s YouTube channel. On Sunday, a “Homegoing Celebration” will air on BET and its YouTube channel at 2:30 p.m.

Early voting for the primary kicked off at 8 a.m. on Saturday, June 12th, and by the time polling pl…

Since the coronavirus pandemic began over a year ago, America has faced a troubling rise of attacks …