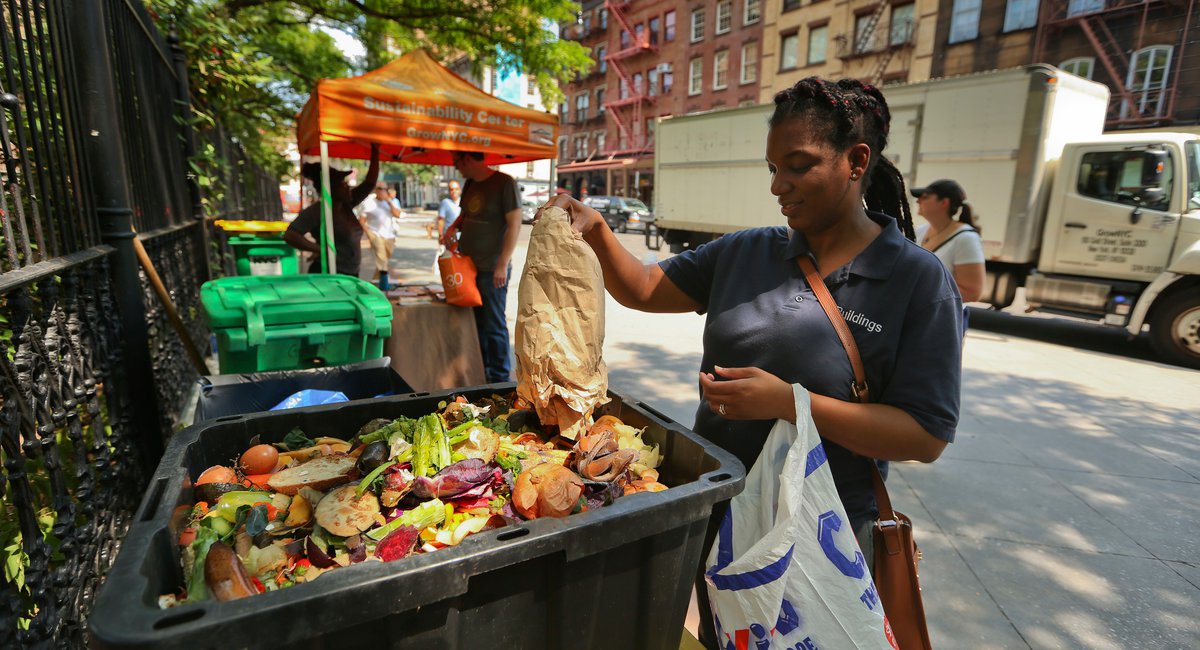 To celebrate Earth Day this week, Mayor Bill de Blasio announced a new lawsuit against several major oil and gas companies, while his new Department of Education Chancellor, Meisha Ross Porter, showed off the first of 75 brand-new electric school buses to take to the streets. Then, the mayor turned to his left and asked a brown plastic compost bin to say a few words. Like an empty chair sharing a stage with Clint Eastwood, it stayed silent.

I was so excited about today’s organics announcement that I lost my compost-ure for a moment this morning. It’s bin a long year for us all.

Curbside composting is coming BACK in New York City!#EarthDay pic.twitter.com/6PeBOr2PYV

The mayor promised that the bin was there for a reason: New York City was reviving its composting program, almost a year after it was canned in budget cuts stemming from the pandemic. Starting in October, this bin—and thousands like it across the five boroughs—could once more be filled with food scraps, leaves, and lawn clippings for curbside pickup.

“I was told the bin had remarks,” de Blasio joked. “We want to really get this right, and we know some people are ready to participate right now.”

However, some environmentalists contend that this is more of a rollback than a revival. Neighborhoods that had curbside compost service before the pandemic will again be eligible for free food waste pickup, but buildings must now sign up for the service instead of being automatically enrolled. And those that didn’t have it still won’t.

Eric Goldstein, environment director for the Natural Resources Defense Council, said it was unlikely to help New York City achieve the mayor’s goal to divert 90% of trash from landfills by 2030.

“It was voluntary before. And of course, that’s part of the problem,” Goldstein said. “What we really need is universal curbside collection and a vibrant community drop-off program for food scraps and yard waste.”

Disposing of the vast amount of food waste that New Yorkers produce is a problem bigger than a single mayor. During his first term, de Blasio pledged to expand the fledgling compost program started by his predecessor, Michael Bloomberg, to the point where it would become a mandatory citywide effort by 2018. He then put that on hold because of the cost, allowing it to languish before finally pulling the plugin 2020. Meanwhile, a recent report by New York City’s Independent Budget Office found that yes, the Department of Sanitation (DSNY) can more efficiently pick up compost from large drop-off sites relative to current curbside routes–but expanding the program could actually make the process cheaper in the long run, as more New Yorkers become accustomed to separating their food scraps from their trash.

Instead of simply bringing back the previous plan, Goldstein says the DSNY should take this moment as an opportunity to rethink its approach to composting entirely.

“The truth is, although those who participated were in love with that program, most New Yorkers didn’t take advantage of it,” Goldstein said. “So the first question is to find out why, what the problems were and to then redesign the program in a way that will achieve widespread participation.”

Sanitation Commissioner Edward Grayson said that the new plan will help the department provide the service to people who want it for now—while allowing officials to focus on an expansion to drop-off points like greenmarkets and public schools.

“Give us time to build on the messaging, give us time to get some real metrics that can help us make a more scalable product for when we’re ready to go back to a really robust program again,” Grayson said.

Celebrate Waitress With a Look Back at Its Run on Broadway

A woman and child are among multiple victims shot in broad daylight in Times Square Saturday, accord…