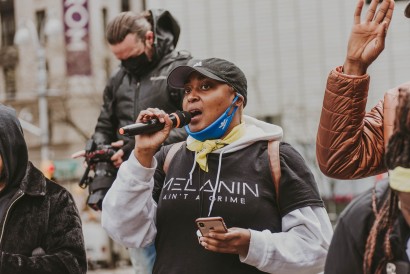 In the wake of allegations of abusive behavior perpetrated by producer Scott Rudin, hundreds of theatre artists and activists gathered in Manhattan April 22 for a “March on Broadway” to ensure proper accountability and transparency within the industry, while advocating for a safer work environment for marginalized communities upon theatre’s reopening. The event, consisting of a rally in Columbus Circle and a subsequent march, brought voice and rallying cries to six demands organizers placed on Rudin, the Broadway League, and Actors’ Equity Association.

Nattalyee Randall, a co-organizer of the event, called these demands “bigger than our union,” calling for solidarity from all members of the industry regardless of identity or role. “What matters the most is that we have to stand together as one solid union,” she said, “And fight against inequality. We want answers, and we want them now.”

Fellow organizer Courtney Daniels echoed the demands for transparency while acknowledging steps toward accountability that have unfolded in the past week due to the movement’s persistence. “Now can you believe what we have done in six days?” she asked the crowd. “Now could you imagine what we could do in a month?” Some of the effects Daniels cited: Rudin’s promise to “step back,” Beauty and the Beast director Rob Roth’s resignation from an upcoming production, and Equity’s call to have former Rudin staff members released from NDAs.

The latter is one step Equity has advocated for in the wake of The Hollywood Reporter’s article the detailed years’ worth of allegations against the producers that outlined instances of abuse and intimidation. The union has also called on the Broadway League to follow the Producers Guild of America in taking action to protect industry members from workplace harassment. The focus shift from Equity to the League also takes shape in the movement’s first demand, which, following discussion with Equity council members, evolved from placing Rudin on Equity’s “Do Not Work” list to removing him from the Broadway League.

The League, a trade association for such industry leaders as producers, theatre owners, and general managers, has not commented on the matter at this time.

But as the March on Broadway’s demands indicate, the group’s need for transparency from Equity persists, regardless of the union’s jurisdiction in sanctioning Rudin. The demands also include the disclosure of organizations AEA is working with to ensure BIPOC safety (the union has since taken steps to respond to this request), a report on the allocation of membership dues, and inclusion within Equity council.

Additional speeches at Columbus Circle implored intersectionality in the arts workers’ movement, echoing some of the six demands released earlier. Sis, a Black trans artist-activist and creator of the theatrical experience Our Offering, highlighted the disproportionate violence Black trans women are victim to, and the need for representation that does not rely on pain. Writer-performer Ryan J. Haddad spoke of his experience as a disabled artist, noting, “deafness and disability are a form of diversity, and we bisect every single other community.”

Others called on white advocates and allies to acknowledge and employ their privilege as Broadway rebuilds post-pandemic. “Withhold your work until the most marginalized folks in our community feel that they are safe and protected,” said Ashley De La Rosa, an alum of Broadway’s Mean Girls. “Demand proper antiracism training and accountability partners from your productions before you even think about signing or resigning those contracts. Because if y’all stand in solidarity, this industry will literally halt. And if you all do it, that pause will last a day.”

Eden Espinosa, who with Karen Olivo founded the organization Artists for Economic Transparency last year, reasoned that such a level of empathy shouldn’t be newfangled: it is what is expected of actors. “In a rehearsal room, you are asked to suspend your disbelief and to put yourself into someone else’s shoes and to empathize with them,” she said before the rally shifted to a march. “I am asking you to use the skills that you spent lots of money acquiring; I am asking you to use your imaginations and for once put yourself into someone else’s shoes in this light.”

READ: Karen Olivo Will Not Return to Moulin Rouge! Musical Upon Broadway Reopening: ‘People Are More Important Than Your Pocketbook’

As the movement traveled from Columbus Circle and down to Washington Square Park, Sis led chants that ranged from affirmations that “Black Lives Matter” to—appropriately, as the march passed the Winter Garden Theatre, home of the upcoming Rudin-backed revival of The Music Man—“We got trouble, right here in New York City.”

Check Out These Disco-Chic Photos From Halston, Starring Ewan McGregor and Krysta Rodriguez

Signature Theatre will celebrate 30 years at its 2021 annual gala Three Decades Together, One Future…