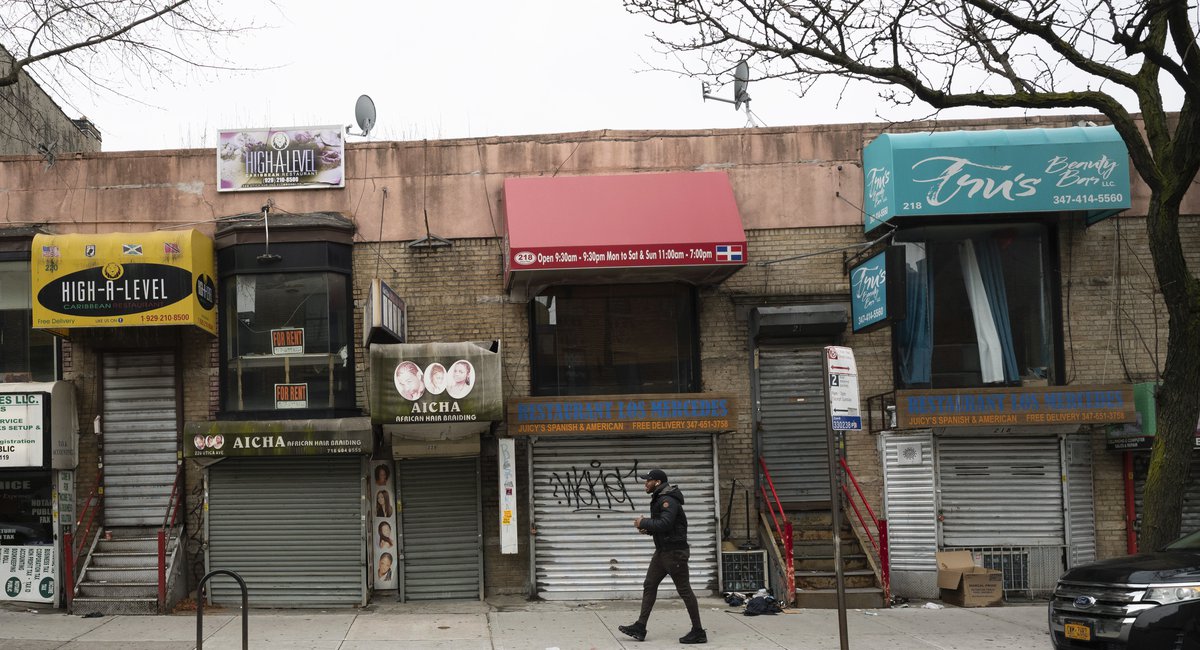 This is part of our One Issue Explainer series, where we break down where mayoral candidates stand on issues concerning New Yorkers. What do you want to hear about? Email us at tips@gothamist.com (subject line: One Issue Explainer).

New York City’s small business community has been hit hard by the pandemic, with non-essential businesses forced to close for a period of time, restaurants scaling back service, and a work-from-home mandate that brought foot traffic to a standstill. Any efforts made by the city and federal government to help keep small businesses afloat have fallen short, and as a result, businesses have shuttered and jobs have been lost. According to a report published last summer by the Partnership for New York City, a third of the roughly 230,000 small businesses in the city had closed, many without plans to reopen after the pandemic ends.

On his campaign website, Adams has a multi-prong plan under his “100 Steps” proposal to save small businesses. He aims to give shopkeepers greater freedom to focus on their business by bringing in local chambers of commerce to handle administrative tasks; would implement a “warning system” for business owners who violate fine-generating rules; and would advocate that the state should subsidize the salaries of small business employees (by divesting from the unemployment fund) to allow owners to retain workers rather than laying them off.

Donovan, the former budget director under President Barack Obama, says a key way to sustaining small businesses is through the creation of the NYC Entrepreneurship Financing Fund for businesses in neighborhood commercial areas, as well as for M/WBEs. The funds would be collected through public, private, and philanthropic dollars. Despite a 200-page rundown of policies he’d like to implement as mayor, Donovan does not elaborate on how he would attract those monies for the fund, though taxing is not a factor in any of his strategies — he has consistently leaned toward public-private partnerships to achieve his goals for the city.

ICYMI: This weekend, I highlighted the increase of vacant storefronts across #NYC, discussed my plan to reboot our economy, & criticized Mayor de Blasio for his failure to provide support to small business owners across the city.

Donovan also said he would also revamp small business regulations, aiming to address “costs imposed on businesses.” Unlike other candidates, however, he has not called for the suspension of fines or fees and he is not advocating for commercial rent relief. But he does want to stop generating city revenue off the backs of small businesses by creating rational regulations “with an eye to utility, equity, public benefit, clarity, and the costs imposed on businesses.”

He would also appoint a City Chief Equity Officer to “monitor the enforcement of business regulations to ensure the fair and consistent enforcement of these rules across all of New York’s communities,” according to his campaign website.

Garcia’s signature proposal to help small businesses involves the use of a City Permit, where any mom and pop with fewer than 100 employees will fill out just “one simple, streamlined permit to get up and running” instead of scrambling to other city agencies. The application can be filled out via an app, and a city response will take no more than a month as opposed to the current months-long timeline.

In Harlem talking to small business owners with #TeamGarcia. When I’m mayor, we’ll start delivering for small businesses on day 1. Fact is, mom-and-pop shops aren’t just the soul of our city, they’re also the economic engine. We’re going to make sure they #ReopenToStayOpen pic.twitter.com/lAnIct6ZWV

As a way of keeping small businesses from closing their doors, Garcia would offer tax incentives to property owners in exchange for forgiving back rent.

The former Wall Street executive looks to subsidize salaries for 50,000 small business employees where owners lost 40% of total revenue in 2020 when compared to 2019. The subsidy would cover 50% of an employee’s salary for one year and serve as a revenue generator for employees and businesses. McGuire—who is framing himself as a bridge between the business community and anti-capitalists—estimates the plan would cost $900 million, though it’s unclear how that will be paid for given the city’s budget woes.

Along with suspending permit, application, and liquor license renewal fees for small businesses, McGuire also plans to lobby state officials to allow small businesses to keep the city portion of sales tax to go towards expenses. He’s also advocating rent relief through a vague set of “financial relief options,” while advocating for utility bill relief through payment plans or by reducing costs altogether.

Even though Morales’ campaign website page outlining her plan to help small businesses remains blank, the former executive director to Phipps Neighborhoods has gone on the record supporting the most progressive plan for small businesses, which involves offering grants to entrepreneurs affected by the pandemic and supporting a citywide commercial rent moratorium for businesses. Morales has not explained how her plan would find funding for these grants.

In an interview with CNBC last week, Morales offered some contours to a plan that veered more toward supporting unspecified tax relief efforts aimed at “generating and regenerating the economy.”

“If you couple that with other initiatives, like a public banking system and incentivizing worker-owned cooperatives, then we’re actually rebuilding our economy in a way that prioritizes our communities and our people and keeps the ‘wealth’ local as opposed to these large corporations that come into our communities, exploit our labor and extract our wealth,” Morales said.

Under a “solidarity plan,” she has already applied a version of the worker-owned cooperative model—in which employees own a portion of the business they work in—during her time at Phipps, and intends to apply that to New York City.

As the city comptroller, Scott Stringer has released a number of recommendations in his official role as the city’s chief fiscal officer, where some of his recommendations to help fix New York City’s small business economy have translated into proposals for his campaign.

But instead of the multi-page proposals that his campaign often releases, Stringer’s plans to help the small business community comes down to: tax relief, creating a repository of vacant storefront businesses so prospective businesses can occupy them, offer entrepreneurs online platforms to broaden their customer base, and expedite application processes for small businesses.

Stringer included some of those proposals in a December 2020 report his office released ahead of the holiday season, detailing how to generate small business activity.

With every dollar counting, Wiley proposes that city taxes to maintain a liquor license along with water, sewer, other fees imposed by the health and consumer affairs departments, should be suspended.

Wiley’s so-called “regulatory holiday” means $100 million in revenue generated from fees and potential fines imposed on small businesses would disappear, though Wiley has reportedly stated the plan would put small businesses “on a pathway to recovery.” Her plan would also include a $30 million program for federally-backed grants, though such an effort requires federal assistance, which she said she’d would have to lobby for if elected.

Yang, once a small business entrepreneur who sold his tutoring company to Kaplan Test Prep, aims to keep 15,000 mom and pop operations from closing their doors should he become the next mayor.

Some immediate priorities he envisions include getting New York City’s business community vaccinated to begin the process of recovery, which is currently underway. At City Hall, Yang would appoint a small business czar who will coordinate with the heads of Small Business Services, Department of Consumer Affairs and Worker Protections, and the Office of Minority and Women-owned Business Enterprises to reduce red tape in opening small businesses faster. He wants to do this by serving as a guide for prospective small business owners, offering advice and best practices to obtain a government contract.

Along with imposing a vacancy tax on commercial property owners (which requires state approval), Yang would also see the passage of the Small Business Jobs Survival Act, which would guarantee decade-long leases.

Other methods to save small businesses include waiving application/renewal fees, enacting a one-year moratorium on fines, allowing shopkeepers to fix violations instead of being penalized for them, extending the cap on delivery fees, and creating a low to no-interest loan program.

Yang also backed Garcia’s proposal for an app to streamline the process of opening up a business.

Inside the ‘March on Broadway,’ Calling for Change, Equity, and Transparency

They came up at a time when prosecutors were expected to be tough, and this was one of the toughest …