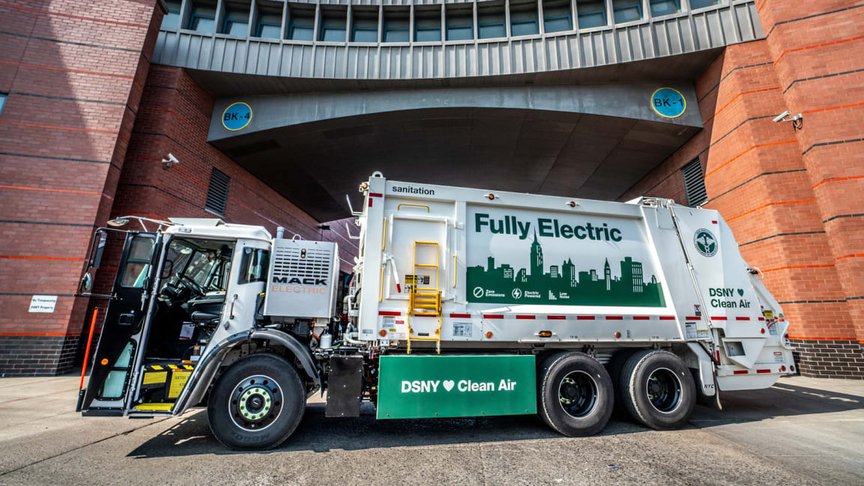 “Historically, New York has pioneered not just our own urban policies but larger national policies,” said Danny Pearlstein, the policy director of Riders Alliance, a transit advocacy group that has rallied around reducing carbon emissions.

Many of the leading mayoral candidates have floated proposals about making New York City greener and less car-reliant, a “sea change” from 2013, according to Pearlstein. For the most part, the ideas are not new–de Blasio last year enacted an ordinance to electrify the city’s entire municipal vehicle fleet by 2040.

But Kathryn Garcia frequently argues that there is a difference between statements and action. “This is about getting it done,” she said.

As sanitation commissioner, Garcia piloted the city’s first electric garbage truck. She said her mayoral administration would build on that work by greatly expanding the number of fully electric vehicles on city roads.

“This is a huge opportunity for the city to make a big statement,” she told Gothamist.

What is Garcia’s plan?

Garcia said she would take robust action to carry out Blasio’s policy requiring the New York City government to shift to a fully electric fleet. Altogether, the city operates over 30,000 vehicles, representing the largest municipal fleet in the country. Currently, about 10% of those cars and trucks are fully electric.

She also wants to incentivize the switch in the private sector. To do so, she said she would triple the number of public car chargers, and offer parking discounts and property tax rebates to homeowners who install the infrastructure. A typical installation costs between $2,000 and $10,000 per port.

A centerpiece of her plan includes an idea that environmental advocates have pushed for years: requiring school buses, whose gas and diesel emissions have been linked to respiratory illnesses in children, to be fully electric. Approximately 150,000 city school children ride yellow school buses daily.

“We’re talking about 10,000 school buses to protect our smallest lungs,” she said.

The change is already in the works. On Thursday, the city unveiled its first electric school bus. The administration has said that it will get to an entire electric fleet by 2035.

According to Garcia, the city can stipulate in its contracts that school buses be electric. It can also purchase its own fleet.

Under her plan, school buses and the MTA’s bus fleet (which currently includes 25 electric buses out of 5,800) would transition to being fully electric by 2040.

How much does her plan cost? How would the city pay for it?

Garcia estimates that her plan would cost roughly $3 billion. Funding would come from an anticipated $2 trillion infrastructure bill proposed by President Joe Biden. And just this week, a group of Democratic lawmakers introduced federal legislation to invest $25 billion to convert the nation’s fleet of gasoline- and diesel-powered school buses to electric vehicles.

If federal funding does not come through, Garcia said she would finance the plan through “a mix of city capital dollars, city expense dollars and existing federal and state grant programs.” The state’s capital plan calls for about $1 billion towards 500 electric commuter buses.

In the long run, a switch to electric vehicles is expected to yield long-term savings on fuel and maintenance that Garcia said would offset some of the upfront costs.

What are the obstacles?

Like the rest of the country, New York City is starting from a low bar. Con Ed is currently working with the city to install 100 public charging stations across the five boroughs. As of last year, there were fewer than 6,000 electric vehicles registered in the city. In addition to the cost of installing the charging stations themselves, charges can be expensive for individual car owners because stations are often located in commercial garages where users have to pay parking fees on top of the electricity.

MTA Bus President Craig Cipriano last year explained to Streetsblog that electric buses cannot make as many roundtrips as much as vehicles that run on compressed natural gas or diesel fuel.

Going forward, the MTA will need greater infrastructure investments. “You need chargers that come down from the ceiling or up from the floor, or inductive charging [no plugs]. That has to play out if these things are going to be viable,” Cipriano said.

Despite the pilot program for sanitation trucks, Garcia acknowledged that the technology is still not quite there. Those vehicles need to carry significant weight and hills can pose a challenge for electric batteries.

There’s also the need to have a backup plan in case of events like Hurricane Sandy in which power gets knocked out.

What do transit experts say?

Manufacturing the cars and batteries produce emissions, and the electricity used to charge electric vehicles currently comes from a mix of fossil fuel and renewable power plants.

On top of that, recycling rates for the lithium-ion batteries used in electric cars are very poor.

He and others have also argued that cities like New York need to keep another metric in mind. Less than half of New York City households own a car, although car registrations picked up during the pandemic.

“The bottom line is that policy makers need to disincentivize buying and using cars,” Pearlstein said.

Towards that end, Garcia has said that she would convert 25% of parking spaces into pedestrian uses by 2025. She is also proposing a pilot residential parking program that would raise the cost of owning a car in New York City and prevent suburban residents from taking up precious curb space.

It’s worth noting that Los Angeles has electric buses in service, with a short-term goal of hundreds more to come; the LADOT began rolling these out in 2017.

This story is part of The Big Idea, a series explaining bold and interesting ideas pitched by candidates in the mayor’s race. Listen to WNYC’s All Things Considered for an interview with the reporter about the plan and more news from the campaign trail.

City Settles With Pregnant Woman Shackled During Birth, But No Discipline For Officers Involved

The history of the Tony Awards contains a treasure trove of iconic moments, igniting the passions of…

For the past month, over 150 hot meals have been handed out to the public in Manhattan’s Herald Squa…