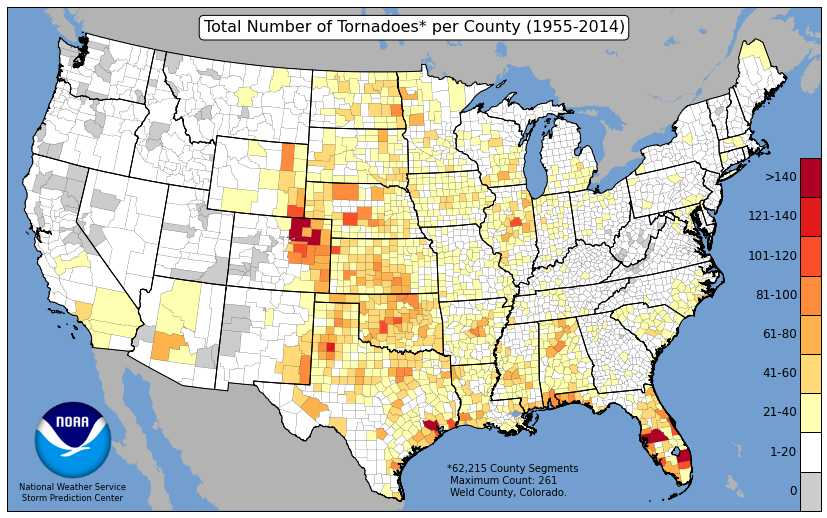 It’s tornado season, as this week’s hail and severe storm warnings around New York and New Jersey can attest. And a rare vortex touched down in Dutchess County. The Northeast isn’t known for these violent windstorms, a reputation typically reserved for the Midwest and the South. Six died during a tornado in Alabama last month.

But the tri-state area is expected to face more severe thunderstorms and tornadoes as the climate warms. These unfamiliar weather events will put these communities at higher risk because they’re not used to preparing for them. Two counties in New York and one in New Jersey already fall into the top five riskiest counties in the country for tornado weather, according to the National Risk Assessment by the Federal Emergency Management Agency (FEMA).

“One of the concerns with tornadoes is that where they occur might change,” said Todd Moore, associate professor of Geoscience and Geography at Fort Hays State University in Kansas. “If you have severe thunderstorms in places where you aren’t used to them, that can be a big problem.”

This burgeoning threat is part of a broader trend of U.S. tornadoes inching toward the Atlantic Ocean. The number of tornadoes occurring in the Plains—traditionally known as Tornado Alley—has been on the decline, whereas the frequency occurring farther east in the Midwest, Mid-south, and Southeast has been increasing, said Moore. Scientists don’t know exactly why this is happening, but Moore offers one possible explanation: the Plains are getting drier, and so there’s less fuel for the storms that go on to produce tornadoes.

Tornadoes are a brand of severe thunderstorms that happen at different times in the year, depending on where you live. Generally, the heart of tornado season is during spring, from March through June. The spring storms, which sometimes produce tornadoes, wreak their own havoc. They can produce high winds and heavy precipitation that can lead to flooding.

“Where we have the clearest connection between those storms and climate changes through the precipitation intensity,” said Noah Diffenbaugh, a climate scientist at Stanford University. The warming atmosphere is expected to increase the energy available for severe thunderstorms.

“We can expect much of the eastern U.S. to experience an increase in the frequency of the atmospheric conditions that produce severe thunderstorms,” Diffenbaugh added.

That also means we’re likely to see more flooding—and the damage that goes along with it. Diffenbaugh said his research shows that increasing intensity of precipitation has contributed around a third of the increase in flood damages over the last three decades.

Another result of warmer, moister air is that it provides more convective energy for storms—a key ingredient that spins the air and creates tornadoes. Differences in wind speed and direction, known as winds heer, can also perpetuate the rotation behind tornadoes.

But it is hard and complicated to predict how frequently these “severe convective” thunderstorms might strike the tri-state area. On the list of strong links between extreme weather events and climate change, scientists say tornadoes currently rank pretty low.

“All the things that people worry about, there is the least certainty about tornadoes,” said Michael Tippett, an associate professor in the Department of Applied Physics and Applied Math at Columbia University.

Tippett said thunderstorms are hard to predict partly because they occur in a very small geographical area, and they don’t last very long. “That is a double whammy because if a tornado occurs and nobody sees, it doesn’t go into the record,” he added. That makes it hard to build climate models for these storms.

Places like Colorado and Florida experience more tornadoes than the East Coast on the whole, but Kings County (Brooklyn), New York (Manhattan) and Hudson County, New Jersey are at higher risk of potential damage according to the National Risk Assessment because they have a denser population and more property.

Risk is a combination of physical hazard, exposure and vulnerability, Diffenbaugh explained: “There are tornadoes that occur where no one lives. That’s part of what lowers the risk score in places people generally associate with tornadoes like Oklahoma. A spokesperson for FEMA said they also look at a community’s ability to recover from natural disasters.

New homes for tornadoes don’t necessarily mean more of these storms are happening overall, though it may feel that way depending on your location. Despite predictions that 2021 would be an active tornado season because of La Nina, a climate pattern that creates favorable storm conditions across the U.S. and has been linked to more tornadic activity, so far, the number of tornadoes is close to average, said Moore. The U.S. has witnessed 252 whirlwinds this year.

“The year started slow, but a few relatively large outbreaks of tornadoes have occurred, mostly through March in the Mid-South and Southeast, and have kept us near pace,” Moore said.

If La Nina conditions persist through spring and into summer, Moore expects this pattern of more concentrated tornado outbreaks to continue and keep this year near or above normal in terms of tornado counts.

One of the ways FEMA recommends preparing for tornadoes is to know the signs, “including a rotating, funnel-shaped cloud, an approaching cloud of debris, or a loud roar like a freight train,” said a FEMA spokesperson. People can also sign up for emergency weather alerts, build a safe room for protection and prepare an emergency kit.

Editor’s note: This story was updated with the news that a tornado touched down in upstate New York during Wednesday’s thunderstorms.

The Broadway Women’s Fund has announced their second annual “Women to Watch” list, including a…