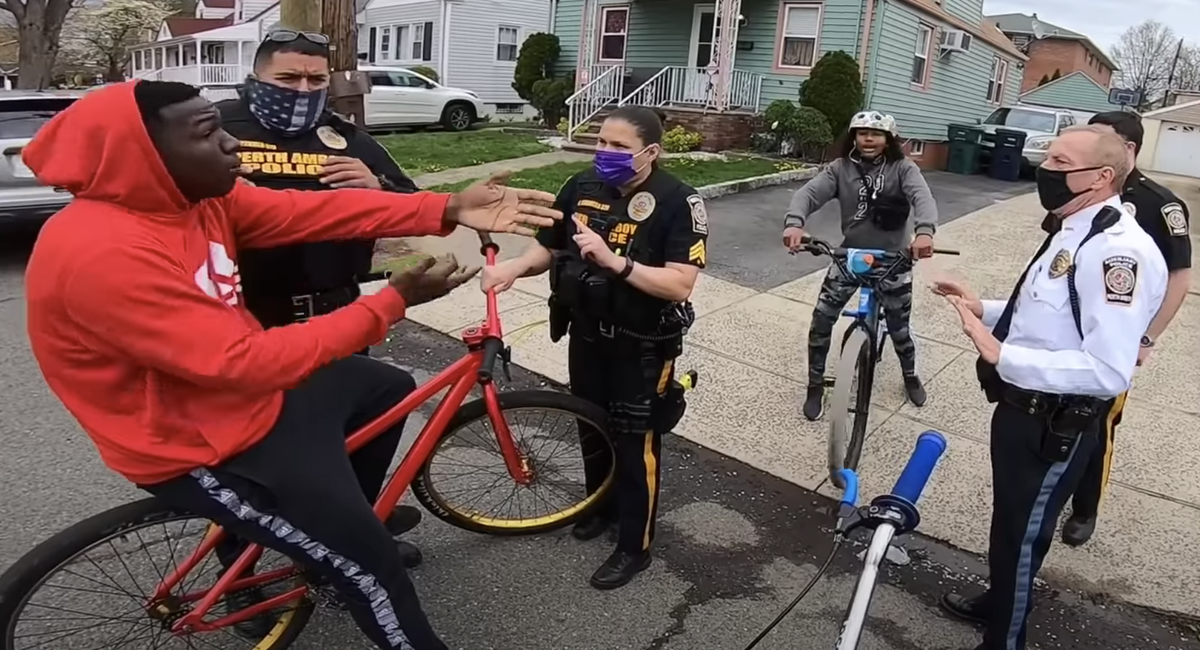 The Middlesex County Prosecutor’s Office is investigating the detainment of a Black teenager in Perth Amboy, New Jersey, for riding a bicycle without a 50-cent license tag.

Video clips of the incident, taken by a friend who was wearing a camera, went viral on Tuesday in the hours before the Derek Chauvin verdict and struck people around the country as yet another example of overly aggressive police enforcement in communities of color.

The county prosecutor, Yolanda Ciccone, said in a statement that “every juvenile being taken into custody by law enforcement in Middlesex County is of the utmost concern” and “what occurred before, during and after the incident depicted is under review.” And the mayor, Helmin Caba, pledged to “be more engaged with the bicycling community to offer safety tips and the rules of the road.”

This is Perth Amboy, NJ. Are the police really arresting kids over bike registrations? Does it really require this many officers to address whatever situation this is? Police CANNOT continue to be our response to EVERYTHING. https://t.co/fcrPfJNKBI

No further information was provided, and a police spokesman didn’t say whether anyone was ultimately charged with a crime. But based on information gleaned from a longer version of the video posted on YouTube, this is what we know.

The video shows a group of approximately two dozen young male bike riders cruising through parks, a waterside promenade, on sidewalks, and on busy roads. They do tricks, like wheelies, and ride down steps of a church. Occasionally one of the bikers briefly veers into oncoming traffic on the wrong side of the double-yellow line. At one point the boys stop to purchase a case of water, which they share. Later, they pass around a blue balloon on a string while riding.

While riding through Perth Amboy, a largely Latino city that sits just across the Arthur Kill from Staten Island, police begin to trail the group. When officers demand, through a loudspeaker announcement, that they pull over, a number of the teens immediately oblige. The first officer to approach them is a volunteer auxiliary officer who seeks to deescalate the situation — he immediately promises not to confiscate their bikes, and he tells them he wants them to be able to bike this summer but also be safe. He indicates that their violation is biking without a license tag, which is required in Perth Amboy and costs 50 cents.

Just as this officer lets them leave, another officer — a sergeant who outranks the auxiliary officer — enters the scene and demands to take bikes. Tensions rise.

One of the bikers, a Black male who appears to be an older teenager, refuses to give up his bike. He’s handcuffed and taken to police headquarters. It’s unclear if he was charged with a crime. The confiscated bikes were eventually returned — which is also documented in the longer video.

Petrick pointed out that the sergeant who ultimately detained the young person is Latina. “Of course in this hyperbolic environment that we’re in right now, the imagery of a minority young man getting placed in handcuffs in a patrol car, it doesn’t send the right image,” he said.

Council Member Bienvenido “B.J.” Torres had a different view. He noted that the situation was initially “deescalated,” and “if it were to have continued in that direction you and I wouldn’t be having this conversation.” Torres said the license law is “quite antiquated,” and he is now going to seek to have it changed.

Torres also said that with bike culture resurgent among young people, he believes they do need to be better educated about the dangers.

Track-by-Track Breakdown: The Lazours Found a Way to Flap Their Wings During a Pandemic

Read on for more theatre news you may have missed in today’s headlines. Shoshana Bean Performs…

In the year since New York became the global epicenter of the COVID-19 crisis, there’s been no short…