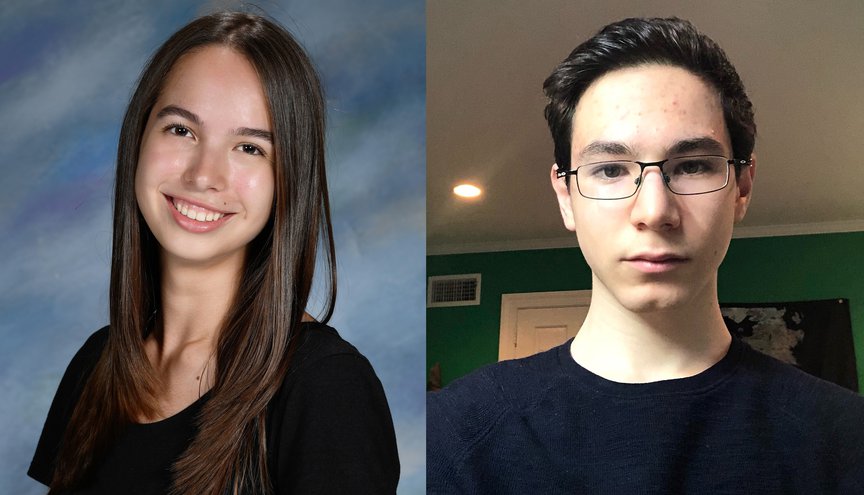 Each year, teams of students from the tri-state area compete in the Federal Reserve Bank of New York’s High School Fed Challenge. They research topics and make presentations in the Fed’s Lower Manhattan offices. But because of the pandemic, this year’s contestants were asked to write research papers, instead. The topic: Economic inequality.

The 12 winners announced last week were chosen from 66 different schools, and their papers looked at all different aspects of inequality — including gentrification, housing, and financial literacy. But a spokeswoman for the Federal Reserve Bank of New York said 10 teams focused on the COVID-19 pandemic.

In conversations with Gothamist/WNYC, some of the kids on these teams said the pandemic made economic inequality much more obvious and personal.

At Connecticut’s Greenwich High School, senior Sofia Pronina and her peers noticed changes when school went remote. “You can see certain students not, you know, showing the same amount of academic achievement as other students who come from better off families,” said the 17-year-old senior, who said not everyone in Greenwich is as wealthy as outsiders might think.

“We realize that this is a huge concern because this then will lead ultimately to economic inequality down the line, given the close knit relationship between educational and economic inequality,” she explained. “So we really wanted to choose a topic that was relevant to us in today’s times.”

Pronina, who will start college at MIT this fall, said some students had access to tutors who could help them when they struggled learning by remote instruction, while others fell through the cracks.

The eight students on her team wrote a paper titled, “The COVID-19 Pandemic and the Circular Relationship Between Educational and Economic Inequality” (PDF of paper). They divided the workload as they culled data from different sources. Among their findings:

“Estimates show that the overall impact of COVID-19 on education will result in the loss of the equivalent of around 6.8 months of learning on average,” the paper stated. “The impact is far more severe for low-income students, however, coming in at the equivalent of 12.4 months of lost school.”

The Federal Reserve Bank of New York shared four papers from this year’s contest with Gothamist/WNYC that focused on the pandemic. The other three, from Bergenfield, West Orange, and Holmdel, New Jersey were not among the winners.

The West Orange team looked at how COVID-19 accelerated American income inequality (PDF of paper). Unlike other schools, which have entered the Fed challenge before, junior Connor Darville, 17, said he learned about it while doing some research online and thought it would be an interesting opportunity for his Advanced Placement history class — especially because they were seeing the impact of COVID-19 in their region.

“They would have these food pantry giveaways and there would be long lines there in the neighboring towns like East Orange, Newark, those are more urban towns,” he explained. “So there were definitely long lines there. And even on the news there, the long lines and the unemployment lines, they were just, it was just a lot to see.”

Their paper cited research from last April showing 80 million adults “reported varying levels of difficulty for their household to cover usual expenses such as food, rent, mortgage, insurance, or student loans in the past seven days.”

Darville’s classmate Hiyab Berhane, 16, said it’s no surprise that low income people suffered the most during the pandemic.

In writing about how COVID-19 “exasperated effects on racial minorities and women” (PDF of paper), the students from Holmdel High School, in Monmouth County, found data showing the closing of childcare facilities and schools forced many women and minorities to leave the workforce. It also hit immigrants very hard, because they own so many small businesses that suffered.

Junior Kyra Santhana said she was surprised by this data. “I didn’t know that immigrants had a higher employment rate than white Americans. I actually didn’t know that,” she said, referring to prior to the pandemic.

But last April, she said, “the unemployment rate of immigrants had fallen by 18%, which meant that April would become the first month in the Twenty First Century where immigrant men did not have a higher rate of employment than native men.”

In northeastern New Jersey,  students at Bergenfield High School researched how the pandemic reversed years of economic progress by women (PDF of paper). Senior Johan Valbuena said he and his classmates knew women in their families who had to stop working to care for children. They got lots of data for their report. But they struggled to find a solution.

“In class, like we learn about some of these policies that have helped with situations like this, especially in recession, like monetary fiscal policies and all these different policies,” he explained. “And it’s crazy because a lot of times me and my friends would debate like, what should they do? Like, what should the government do to help alleviate this issue?”

Students at the other teams also found the solutions evasive. Should the government spend more money, or would tax increases have a negative impact? They described friendly debates and learning about how in economics, one action can trigger another reaction. Santhana, of Holmdel, said it was easier to talk about very targeted solutions, such as education to help those who had fallen behind, “break out of these, like, impoverished conditions and hopefully economically improve.”

The students said this assignment opened their eyes to how COVID has deepened economic divides that already existed. Valbuena said becoming educated about a problem is the first step in fixing it. “I definitely love economics a lot more,” he laughed.

A star-studded cast of theatre favorites will take over for Season 4 of HBO’s drama In Treatment. Ch…

The in-the-works Mystic Pizza musical has some new items on its menu: hits from several ‘80s and ‘90…

Read on for more theatre news you may have missed in today’s headlines. Daytime Pop Up Perform…