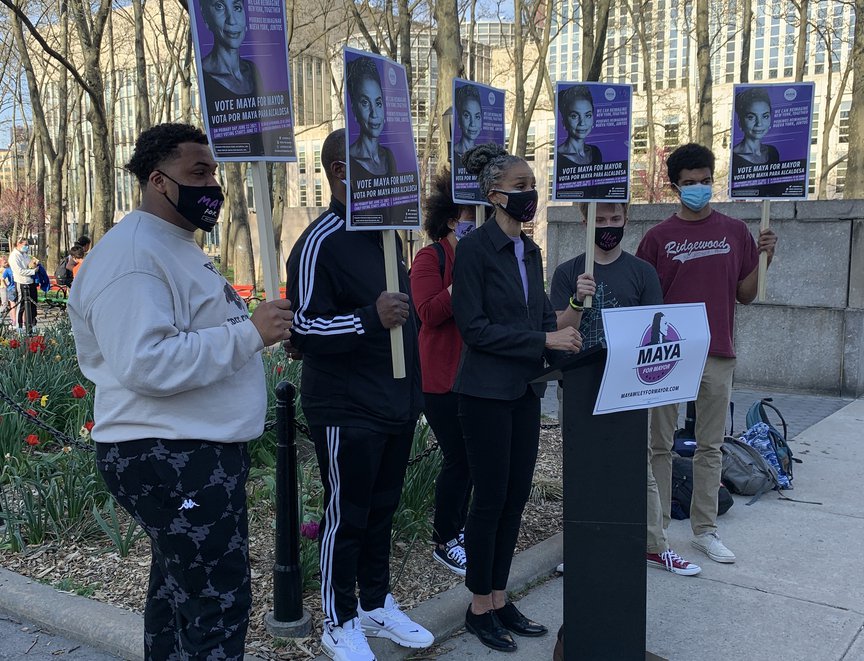 Wiley was one of several leading Democratic mayoral candidates that issued statements calling for police reform and accountability after a jury found Derek Chauvin guilty of three counts in the death of Floyd last May.

From the beginning, the battle for racial justice has loomed heavily over the mayoral race, but the emotional end of the Chauvin trial provided the candidates with another opportunity to address an issue with a long and fraught history in the city, most recently symbolized by Eric Garner, a Staten Island man whose death from a police chokehold further spurred the Black Lives Matter movement.

Some of the candidates, including Wiley, sought to tell voters how they would approach policing.

Asked about aggressive policing tactics that occurred in the city last summer during Black Lives Matter protests, Wiley, a former civil rights attorney who served as counsel to Mayor Bill de Blasio, told Gothamist that she would have intervened and instructed the police commissioner to discipline officers.

De Blasio was criticized for defending the police and his commissioner Dermot Shea.

Referring to the behavior toward protesters as “unconstitutional policing,” she said, “There’s no public servant in government that can just violate people’s rights and get away with it.”

“Kettling has to go,” she added, referring to a technique police used to surround and trap protesters and then charge in and make arrests.

Afterwards, Wiley headed to Barclays Center, where New Yorkers had gathered to commemorate the death of Floyd.

Wiley is one of three Democrats, along Shaun Donovan, Dianne Morales, who have pledged to redirect significant levels of funding from the NYPD and put the money towards other community needs.

However, only Morales has fully embraced the defund the police movement, which has called for the most aggressive cuts to the police budget. She has called for relocating $3 billion to communities affected by violent crime.

Morales, a former nonprofit executive, and Donovan, who worked as housing secretary under President Obama, were also in attendance at the Barclays Center protest, as was City Comptroller Scott Stringer.

“Make no mistake about it: Activists, advocates, and Black and brown communities know that we must continue this fight,” Morales said, in a statement. “We will continue to show up for Black Lives, and it’s why I’m steadfast in my commitment to Defund the NYPD and to finally fund our communities. Now is the time to dismiss the myth that police equals safety.”

Stringer, who previously said he would favor a $1 billion cut over four years from the NYPD but has since backed away from the defund movement, said in a statement, “As mayor, I will not be held hostage by the police — and I won’t back down from upending the status quo when I encounter resistance.”

Ray McGuire appeared at his own press conference on the Upper West Side alongside Gwen Carr, the mother of Eric Garner who has endorsed and appeared in a TV commercial for the candidate.

“I’m so happy for the Floyd family that this didn’t go the other way,” Carr said. “Because we all know it could have gone the other way.”

Following Carr’s remarks, McGuire vowed to make reforms, saying that police officers “must be held accountable for the actions of their department.”

Gwen Carr, Eric Garner’s mother, joined @RayForMayor to discuss the conviction of Derek Chauvin for George Floyd’s murder. She noted that there was only an NYPD departmental trial for her son’s death—no criminal charges for the officer who performed an illegal chokehold. pic.twitter.com/9Wr8Ixll6d

The former Citigroup executive has made racial justice and equity a central platform of his campaign. Earlier this month, he traveled to Minneapolis, where he met with the Floyd family as part of a group that included Carr, the Reverend Al Sharpton and former New York governor David Paterson.

Other candidates issued their own statements on the verdict.

I hope this verdict gives some small measure of healing to George Floyd’s family and friends, but we are a long way away from living in a country that fully lives up to our founding promise of life and liberty. pic.twitter.com/aTIgy5Bw2Z

“Police departments across the country are infected by racism and only serious reforms that bring diversity, transparency and humanity to policing will prevent the death of the next George Floyd,” said Brooklyn borough president Eric Adams, a former NYPD officer who has promised to enact change without making major cuts to policing.

Andrew Yang, who in the wake of anti-Asian violence has called for full funding of the NYPD’s Asian Hate Crime Task Force, said, “We must also use this moment to begin a relentless pursuit of justice for the countless Black and Brown women, men, and trans people who have been killed at the hands of the police.”

Appealing to the Black Lives Matter movement without seeming politically opportunistic has proven to be difficult for some of the candidates.

Last week, Yang was heckled during a bike protest and vigil for Daunte Wright, a 20-year-old unarmed Black man who was shot and killed by a Minneapolis police woman, after some protesters accused him of using the event as a “political photo-op.”

Similarly, Wiley was interrupted Tuesday night by a protester, who reportedly yelled during her remarks outside the Barclays Center, “George Floyd did not die so you could be elected.”

At Barclays, @mayawiley has taken the mic, pledging to take a billion dollars out of the NYPD budget. She’s shouted down by someone in an ACAB t-shirt: “George Floyd did not die so you could be elected. That’s fucking shameful. Abolition and nothing less.”

Until now, the main benefit of getting vaccinated was being much less likely to get seriously ill or…