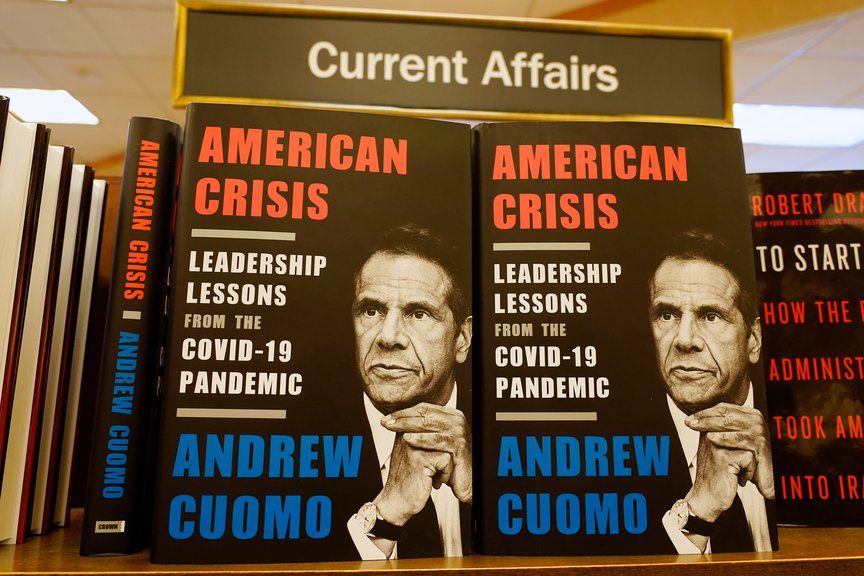 The State Comptroller’s office has requested Attorney General Tish James conduct a criminal investigation into whether Governor Andrew Cuomo or top aides violated the law while working on his memoir last summer.

In a letter sent to James’ office on April 13th, State Comptroller Thomas DiNapoli requested James inspect “the alleged commission of any indictable offense” related to the use of state property or resources by Cuomo’s executive chamber “in the drafting, editing, sale and promotion of the Governor’s book and any related financial or business transaction.”

DiNapoli also authorized James to present charges to a grand jury and to “prosecute the person or persons believed to have committed…any crime or offense arising out of such investigation.”

The New York Times first reported on the Comptroller’s referral on Monday afternoon. State law requires James’ office to get a referral from the governor, the comptroller, or several other top state officials to start certain investigations.

It’s not immediately clear what criminal statutes Cuomo may have violated, and the comptroller’s office declined to specify. A spokesperson for James’ office confirmed they had received the referral but declined to comment further.

When asked about the latest potential probe into Cuomo’s conduct, senior advisor Rich Azzopardi said the probe “jumped the shark,” and accused DiNapoli of acting in an unethical and politically motivated manner.

“The idea there was criminality involved here is patently absurd on its face and is just the furthering of a political pile-on,” Azzopardi said. “This is Albany politics at its worst and to be clear — it is unethical to wield his criminal referral authority to further political self-interest‎.”

Cuomo first announced he was writing a mid-pandemic memoir, titled American Crisis: Leadership Lessons From the COVID-19 Pandemic, on July 10th, 2020, four days after the release of a health department report that top staffers had altered to lower the number of deaths in nursing homes from COVID.

The NY Times and the Times Union later reported both top aides and junior staffers were expected to work on the memoir as part of their normal duties, raising concerns about potential violations of the state Public Officers Law, which prohibits state resources from being used for personal gain. Cuomo’s office has maintained any work staff did on the memoir was voluntary and not paid for from state coffers. But ethics experts also point to the larger ethical question of whether Cuomo was deliberately deflating the number of nursing home deaths in order to secure the book deal, which could also represent a violation of ethics laws.

Violations of the public officers law are supposed to be upheld by the State’s Joint Commission on Public Ethics, which was recently sent two complaints from state Republicans about Cuomo’s conduct. On April 9th, the commission held a two-hour long executive session after which a representative said they had “authorized steps in an investigative matter,” but declined to state what the matter entailed.

John Kaehny with the good government group Reinvent Albany, who’s long criticized JCOPE for being “toothless,” took the Comptroller’s referral as sign the comptroller and the state attorney wanted to go around the state ethics commission.

“It shows they have no confidence in JCOPE,” Kaehny said. “They’ve teamed up to basically do JCOPE’s job.”

A spokesperson for JCOPE didn’t return a request for comment right away.

In mid-March, The New York State Assembly launched an investigation into nursing homes, sexual harassment, and the Mario M. Cuomo Bridge, among other subjects. Several women who’ve accused Cuomo of sexual harassment have said they would not participate in the process fearing it was too political. The investigation could be a precursor to an impeachment vote in the Assembly, but critics have called the probe a stall tactic from Cuomo’s political allies hoping to buy him more time.

The FBI and the federal prosecutors in the Eastern District of New York are reportedly probing Cuomo’s handling of nursing homes during the pandemic, and whether he falsified data provided to the federal government regarding nursing home deaths.

Attorney General Tish James hired an outside firm in early March to investigate sexual harassment allegations by at least five current and former staffers against Cuomo, as well as several other women who met Cuomo in passing. Her office has reportedly subpoenaed top officials in Cuomo’s office.

In early April Republican legislators filed two complaints with the state’s Joint Commission on Public about whether state resources were used during the writing and promotion of Cuomo’s memoir. After a two-hour-long closed door meeting on April 9th, the commission said they had “authorized steps in an investigative matter,” declining to state what the matter was.

Restaurants have always been a vital part of any New York City neighborhood. One of the greatest per…