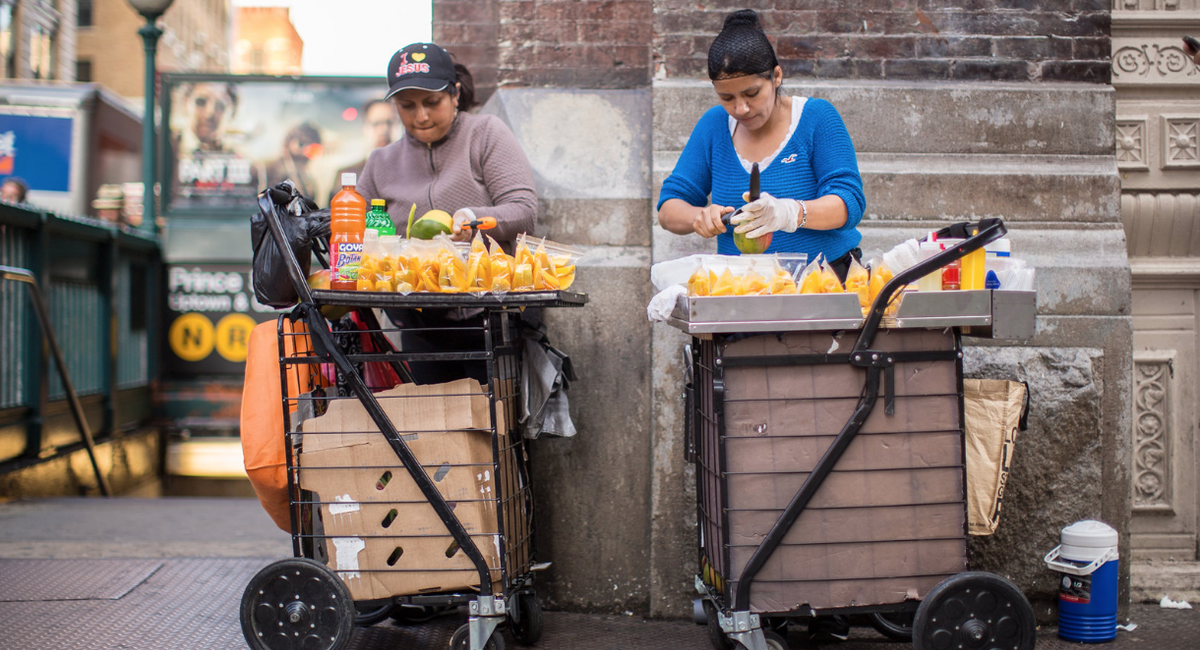 Mayoral candidate Andrew Yang drew a cascade of criticism from his Democratic rivals and others after he suggested on Sunday there should be more enforcement of unlicensed street vendors, the latest flare-up that could galvanize progressives against the political upstart’s surging campaign.

The controversy began after Yang tweeted that he has repeatedly heard that the city is not enforcing rules against unlicensed street vendors.

You know what I hear over and over again – that NYC is not enforcing rules against unlicensed street vendors. I’m for increasing licenses but we should do more for the retailers who are paying rent and trying to survive.

The comment rankled New Yorkers who were outraged over the 2019 arrest of a churro vendor in the subway, which many advocates and elected officials viewed as an attack on working-class immigrants. Although Mayor Bill de Blasio last year said the NYPD would no longer issue tickets against unlicensed street vendors, one recent study found that the practice persists.

New York City has as many as 20,000 street vendors, who have been credited with contributing hundreds of millions of dollars to the economy but have faced backlash from some competing brick and mortar business owners. Advocates for street vendors have argued against police crackdowns, especially since the city has long maintained a restrictive cap on the number of licenses available. In January, the city finally agreed to double the number of permits.

Several mayoral candidates, including Dianne Morales, Scott Stringer and Maya Wiley, seized on Yang’s remarks and accused him of failing to understand the city.

Who exactly are you listening to? The New Yorkers I’m listening to don’t think vendors in the subway are THE problem. The over-policing of vendors is an example of broken windows policing gone wrong and of misplaced priorities and resources. You should not go to jail for vending. https://t.co/cJhd3kKAml

Street vendors are part of the fabric of our city. We should empower and protect them — including by adopting commercial rent stabilization and expanding workers’ rights. The @VendorPower coalition was a critical part of the #FundExcludedWorkers year of organizing and victory.

Paperboy Prince, a Brooklyn rapper who is also running for mayor, delivered a softer rebuke.

Love you Andrew! I’m the only street vendor who is running for Mayor and I can tell you about how complex doing biz on the streets of NYC is. These folks (myself included) are already extremely over-policed and need more Love. They make the city great. https://t.co/epF090pTVm

Bill Neidhardt, a spokesperson for the mayor also weighed in, saying in a tweet, “Overpolicing and mass incarceration are NOT the answer.”

Yang later attempted to walk back his remarks, saying that he would like to legalize more unlicensed vendors. “Education for immigrant/non English speaking vendors on rules of vending, opening more spaces for legal outdoor vending, working with small businesses to broker tensions all would help,” he wrote.

With only 10 weeks to go until the mayoral primary, the majority of Democratic New Yorkers appear to be undecided about the eight leading candidates, although several polls have shown Yang to be leading the pack. Progressive groups are beginning to rally against Yang, who is generally more centrist and pro-business. The Working Families Party, which has been influential in state races, is expected to hold their endorsement process this week.

On Monday, Stringer, who is currently the city’s comptroller, held a press conference in Corona, Queens to condemn Yang’s remarks.

“How can you claim to love New York City and want to throw hard-working New Yorkers in jail?” he said, surrounded by activists and elected officials. “This is a criminalization of poverty.”

Stringer added: “That’s why we cannot have a mayor that tweets first and thinks second.”