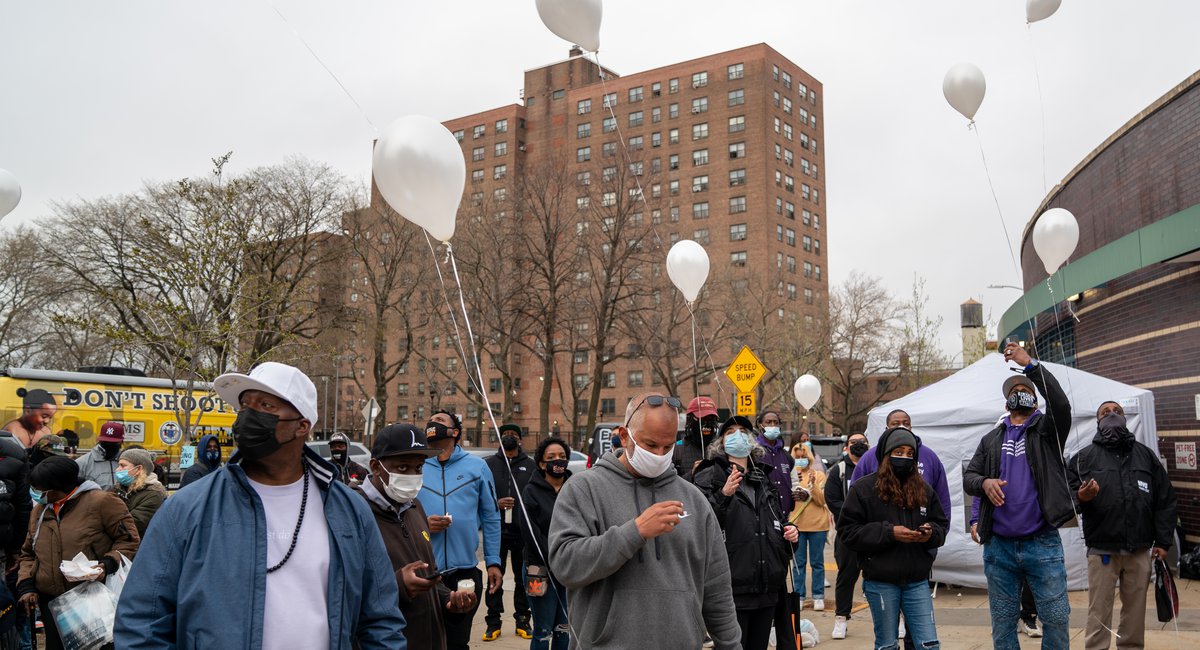 Cathleen Freemantle was sobbing openly as she listened to speakers at a vigil in Brownsville outside the Van Dyke Houses, describing the horrific triple homicide that took place earlier in the week.

She did not know Joseph McCrimon, 46, the man who gunned down his girlfriend Rasheeda Barzey and her two older daughters, sparing the life of the child Barzey and McCrimon had together, a little girl who was celebrating her ninth birthday that day. The domestic violence incident comes amid an increase in gun violence across the city.

But Freemantle lost her own mother to domestic violence when she was a child, shot 27 times by a man who claimed he loved her. The thought of the surviving nine-year-old, the same age she was when her own mother was killed, brought Freemantle to tears.

“When you go through something so young, you never forget,” she said. “This little girl is gonna need a lot of support.”

Brownsville residents and anti-violence activists lit candles and released balloons into the grey sky on Friday evening, in memory of 46-year-old Barzey, an assistant in the city’s public hospital system and her two daughters Chloe Spears, 16, and her sister Solei, 20, a political science major at Baruch College. McCrimon shot and killed himself a few blocks away shortly after the murders. While residents paid their respects to the victims, others also sympathized with McCrimon.

“I was able to see this young man sprawled out on the ground […] and the paramedics trying to resuscitate him. I tell you, it left me with such a numbing feeling,” said Alaire Chappell, 61, who said she watched from her apartment window. “What is going on in a young person’s life that they behave in this way. How he must have been distraught to do something like that.”

Violence interrupters and elected officials called on community members to reach out if they feared someone was at risk of harming themselves or others.

The state just approved a measure in the budget pushed for by Democratic lawmakers to set aside at least $10 million of federal funding from the Victims of Crime Act to put towards CURE violence groups, adding to the $40 million the city earmarks to anti-violence programs.

Hailey Nolasco with the RISE project, an advocacy group combating domestic violence, said people have to move past the idea that domestic violence is personal or none of your business if you suspect a friend or neighbor is experiencing it.

“This right here shows us we need to get involved,” she said.

Between 2010 and 2019, 663 people were killed in domestic violence incidents, about 18% of all the city’s murders in that time. Black women were killed at disproportionately higher rates, accounting for 30% of murders but just 13% of the city’s population, according to a recent analysis. Advocates have raised concerns that the pandemic may have exacerbated conditions for women experiencing domestic violence. Last year police recorded more than 8,000 domestic violence assaults.

Freemantle said she’d always remember the day her mother walked out of the house, telling her and her siblings, “this is not my day.” They never saw her again.

“We have to learn how to turn our anger elsewhere without hurting one another,” Fremantle said. “To take a life, an innocent life and you claim it’s love, that’s not love.”