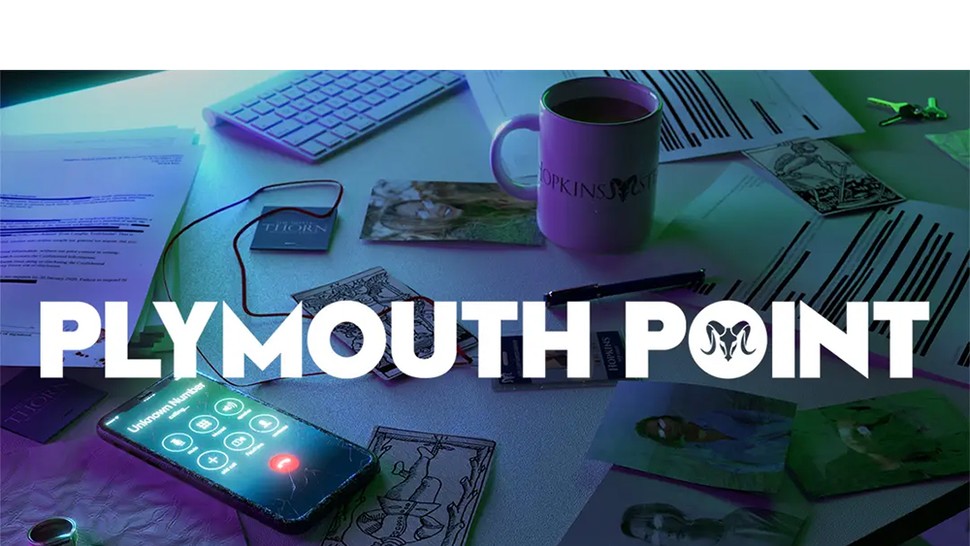 What makes Plymouth Point all the more impressive is the fact that it was created under U.K. lockdown, with Garrity and Jones dreaming up new ways to tell a story via Zoom and then calling their cast members to have them raid their closets for costumes. The end result feels anything but scrappy, however, with sleek finishes, high-caliber acting, and even a few cinematic moments.

In the story, Ivy has gone missing—and the residents of Plymouth Point are concerned. The immersive theatrical thriller for 2 to 6 players begins on Zoom, allowing friends and family to play from wherever they are. In fact, it’s designed to work best with each team member on their own separate laptop or computer, with one person sharing their screen with the team. Players need to hunt for clues, crack codes, and discover passwords to piece together the mystery, but be warned—players only have 1 hour and 15 minutes to find Ivy before time runs out.

Bathsheba Piepe, who plays one of Plymouth Point’s main characters, spoke to Playbill about the process of creating this unique experience under unprecedented circumstances. Check out the Q&A below, and click here to find out more information about the show or buy tickets to a performance.

How did you learn about this project?
Bathsheba Piepe: The evolution of the project is quite incredible really, because my first experience of it was I got a phone call from Clem saying, “We’ve got this idea, and I just wanted to see if you would want to be involved, and could you take some photos of yourself with a pet?”

And that was the beginning. Luckily, I’ve known Clem and Ollie since university, and I would work with them over and over again because they’re just so fantastic. So I went, “Yeah I’m in.”

What were your initial thoughts?
When he explained the idea of it to me, I thought, “God that’s amazing.” But it was so interesting because at first it seemed like quite a sort of a 2D kind of game, and especially when he first showed me the outline of the first kind of arc of the story, it’s Ivy has gone missing and I thought “Okay, so this is what the story is and then, of course, as you know…”

How did your understanding of it change?
It was really exciting because we did some audio recording—and in Plymouth Point it’s all about recording on Zoom—and it was really exciting to see how, creatively, we could then tell a story. And for me it was also exciting because it felt so new, and using all of these techniques that seemed kind of at one point so theatrical in terms of the storytelling and then also so new and digital and immersive and somehow combining those two.

And I also felt this real sense of excitement because, being home everyone was in lockdown, shops were closed, so it was a case of kind of going, “Okay um. What, what can I make a costume with?” Or like, “How can I dress my room, so it looks like it’s meant to be this?” And I think those kinds of creative leaps you wouldn’t normally make yourself because normally if you’re doing a production, then someone will make the set, and you know everything is taken care of and in a way, there was something so exciting about this kind of going, “Okay, we know what we’re doing in some ways, and in some ways, no one has any idea what this is going to be, because no one’s done it before.”

Was there a script in advance that you could read through?
That’s an amazing question because you know normally when you when you work on a production you know the character’s journey, you know the ending of the play before you start rehearsals, and with this, it was actually really exciting for me, as a person, because I was experiencing each of the twists they were happening because Clem would call me up and go, “Okay, so can we film this kind of thing, because this is going to happen next?” And then I think, “Okay, so now, I understand what’s happening,” and then you’d go “Okay, but then this.” I was very much having to build and discover as it was happening, but then I think that’s also so exciting, because it means that you can’t get set in your ways, you can’t get stuck with one idea of what this character is because she does keep evolving.

I had this amazing sense of enjoyment and intrigue myself of just discovery, and I think that’s also what’s so exciting about the experience of it is that the audience or the players are so integral. It cannot happen without them. They’re not passive.

What are the aspects of Plymouth Point that you personally see as particularly theatrical?
I’ve been thinking a lot about the way that theatre artists have had to adapt and change this year. And with this project when it first started, I thought, “Oh Okay, so this is a video game,” and then you know, I kind of went, “Oh no, it’s immersive.” And I feel in a way that’s what’s so exciting about this time is how we’ve all had to just explore and change the way we work.

Clem and Ollie have such an extensive theatrical background, and especially because I think the key thing is the storytelling, that’s why it’s so exciting and nail biting. I think it’s interesting because it is then also digital, but it’s not like a stage production that you film. Audiences are totally in the story, and they drive it, and it wouldn’t work without the momentum, so I think it is this kind of very exciting new kind of genre defying experience. And I hope that kind of exploration, will be able to continue, even when maybe things start to get a bit more back to normal.

After COVID-19 vaccine appointments open up to “public-facing” workers this Wednesday, it will bring…

In New York City, hundreds of thousands of COVID-19 vaccine doses are now being given out each week,…