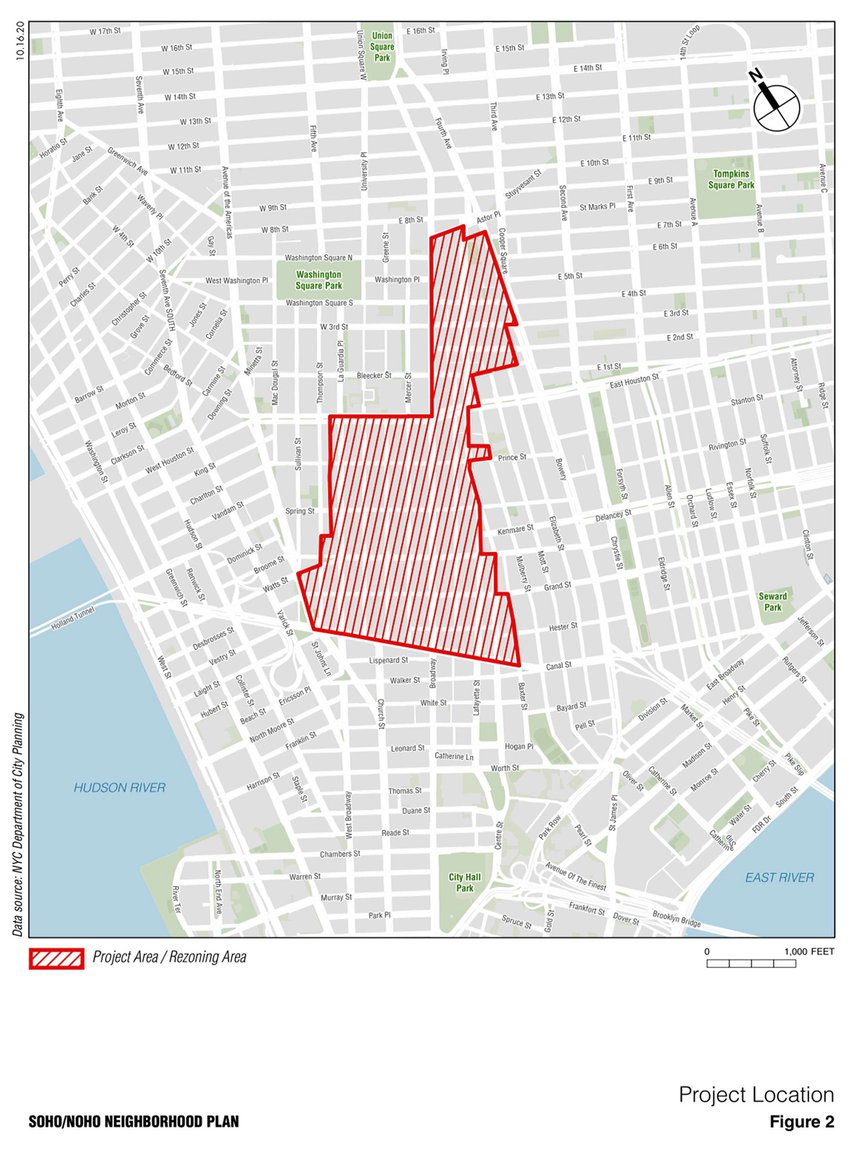 The de Blasio administration is getting ready to submit its proposal to rezone SoHo and NoHo for formal review—a seven-month-long process that’ll put it before the local community board, Manhattan Borough president, Planning Commission, and ultimately, the City Council. But the rough outlines of its plan, which would add affordable housing to two of Manhattan’s wealthiest neighborhoods and has been the center of contentious fights amongst New Yorkers, came out in October. Here’s what you need to know to follow the debate:

1. This Rezoning Didn’t Start Out To Be All That Much About Housing. Now It Is

In 2015, Manhattan Borough President Gale Brewer and City Councilmember Margaret Chin asked city planners to draw up a rezoning, spurred by the high number of special permits and zoning variances that enabled large retailers to operate in a neighborhood intended, since 1971, for artists and industry. While housing was on Brewer’s and Chin’s wish list, it was far down.

Four years later, a community advisory group also mentioned the need for more housing, but again, they focused more on the complications caused by existing zoning rules. That changed last fall, when the de Blasio administration released its rezoning proposal. Housing could not have been more central: if the plan goes through as is, it would permit 2 million more square feet of residential space—enough for 3,231 more units. (The fight over new housing has broken to some degree along generational lines, with younger New Yorkers urging more supply while older neighborhood residents oppose it.)

2. Mayor Bill De Blasio Wasn’t Even Sure He Was Going To Pursue This Rezoning

A couple of months after the advisory group reported out, de Blasio expressed support for rezoning SoHo, but suggested he wouldn’t get to it by the end of his term, which expires December 31st of this year. “I’m going to put my energy into the places where I am convinced we can get something done,” he said on WNYC’s Brian Lehrer Show in January 2020. “As we look at that issue, that’s the question. Can we put together the support to get something like that done? I’m not sure about that at this point.”

But then, housing activists, led by Open New York, formed a coalition of 21 groups that cast the rezoning as a social justice issue—a way to force an affluent area to carry its weight and increase the city’s housing supply. On October 7th, the same day the coalition released a letter advocating the rezoning,  the de Blasio administration committed to doing just that.

3. Most Of The Tall Buildings Would Be Built Outside Of The Historic Districts

Some 85% of the rezoning area lies within the SoHo and NoHo historic districts, which means that any development in those borders would have to go through the Landmarks Preservation Commission, which generally frowns on demolitions. Rather most of the new development would take place in three small pockets on the fringes of the rezoning area.

Within existing buildings, however, office or industrial space could easily be converted to apartments under the proposed rules. And city officials say that current zoning rules actually do not impose height limits, only size limits, while the rezoning plan would (though up to 270 feet in one instance).

4. Estimates Of The Amount Of Affordable Housing That Will Be Built Vary Widely

No one expects developers to create below-market rate units out of a sense of charity. Instead, they will build them because they will be forced to under the 2016 Mandatory Inclusionary Housing policy. As applied to SoHo/NoHo, the policy would require any new large building, or residential conversion of an existing one, would have to devote 25% to 30% of its floor space to apartments priced for low- or moderate-income tenants. The city estimates that between 328 and 494 affordable units would likely be created within the next decade, though potentially more than 900 units if every potential site is developed and converted.

Of course, if there is a real estate crash, a mortgage meltdown, a pandemic, or other unexpected economic shock, the number of actual built affordable units could be much lower. (It’s happened before.)

5. The Rezoning Would Open The Door Wider To Department Stores

Believe it or not, the type of giant clothing stores that populate Lower Broadway are not really allowed under the existing zoning. Their owners have either received special permits or zoning variances from the city, or they are outright breaking the law. But instead of trying to fight these retailers, the city has essentially decided to join them.

The rezoning proposal would allow department stores and gyms of 10,000 square feet or more in the neighborhood to be as of right. City planners argue that the current process is a bureaucratic nightmare: in some cases property owners keep their ground floors  vacant for a year or more while they try to attract an industrial tenant, and, when they cannot, they come to the city pleading for it to relax the rules.

6. Owners Of Live-Work Lofts Could Cash In

The de Blasio administration’s proposal would let SoHo artists legally remain in their live-work lofts, or, if they own them as part of a cooperative, let them sell to non-artists—which is currently illegal to do but rarely enforced. If they sell, they’ll be required to contribute part of the proceeds to an arts fund. (The details of how much, and how that money will be used, haven’t been worked out yet.)

The catch is that some lofts are not occupant-owned but rented, and their owners could well seek to force out their tenants with the prospect of a legitimate conversion. City officials say rent-regulated tenants will be protected by anti-harassment legislation, and can avail themselves of city services, but at a presentation from the Department of City Planning Tuesday, a couple members of the audience did not seem enthused about being put in that position.

7. Yes, De Blasio Could Complete The Rezoning By The End Of His Term

The city’s Uniformed Land Use Review Procedure stipulates that all zoning changes must be made over a seven-month timeframe (the better to force warring parties to negotiate a compromise). But, while the city has spent more than two years laying the groundwork for the rezoning, the clock hasn’t started ticking.

That will happen when the Department of City Planning “certifies” the administration’s proposal. As long as that happens by June, the city will complete the action by the end of the current mayoral and City Council terms on December 31st–which is important.

While many mayoral candidates support the rezoning, at least three candidates vying for the City Council seat do not, and city councilmembers traditionally have enormous influence over what happens within their district.

Read on for some recent theatre headlines you may have missed in today’s news. Lea Salonga, Da…