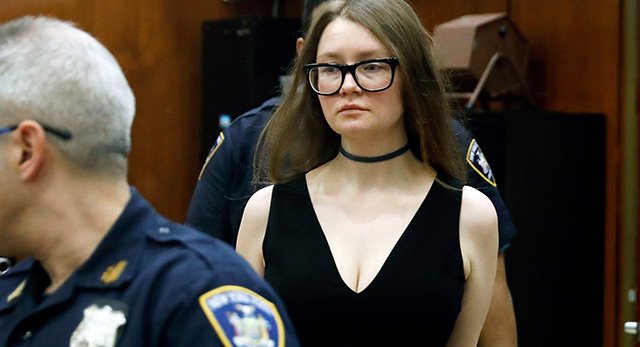 The woman convicted of grand larceny while posing as a German heiress in Manhattan is now in the custody of federal law enforcement.

Anna Sorokin, a 30-year-old Russian national, has been detained by Immigration and Customs Enforcement since March 25th, the agency told the AP. The NY Post reported that she had gone to a downtown immigration office and was later being held at a facility in Bergen County.

Sorokin, who went by the name Anna Delvey and was known as the “SoHo Grifter,” had posed as a wealthy heiress from Germany, claiming she had tens of millions in her bank accounts and that she would open an arts foundation in the city. But, according to Manhattan prosecutors, it turned out that she forged bank statements and also duped friends along the way, scamming them out of $275,000.

She was sentenced to four-to-12 years in prison in 2019, but was released in February for good behavior. She described her experience at Albion Correctional Center to Insider: “I feel like it’s insane. To take people, to lock them up, take everything away from them, and just to expect them to reform. What is that supposed to do for you? You’re just deprived of everything. The same solution for everyone, no matter what you’ve done? When you’re a criminal, it’s such a different mindset, whether you kill someone, or if you sell drugs. The place where you’re coming from is not comparable. They have this universal solution for everyone, and that should not be the case.”

Back in Manhattan, Sorokin quickly shared her movements on social media; her last Instagram post was from March 23rd and her last Tweet is from March 24th:

Can’t fuck with the new me

However, she had overstayed her visa by the time the trial took place, and ICE had vowed to deport her.

Sorokin has apparently paid back her victims and covered her legal fees with a $320,000 fee she received from Netflix. Producer Shonda Rhimes is currently filming a series based on her, starring Julia Garner (of Ozark).

In her post-prison life, Sorokin has insisted that she always intended to pay back those she was borrowing money from and said that people just assumed she was an heiress. (A former friend said during the trial that she invited her on a trip to Monaco, saying Sorokin would pay for expenses—but then Sorokin convinced her to foot the $70,000 bill.) When a reporter for the BBC asked her if crime paid, she said, “In a way, it did… I never asked for Netflix to buy my story, it just happened. And everything else, it just spun out of my control. It’s not like I orchestrated anything.”

Sorokin also discussed a range of her new projects saying, “I am writing my book, I have my NFT project, and my merch, and [I am working on] prison reform. I am trying to turn the attention I am getting into something positive.”

No need to panic over gas availability, especially in New York and New Jersey, experts say. The regi…

Jamie might be breaking his mother’s heart in The Last Five Years, but the performer playing h…