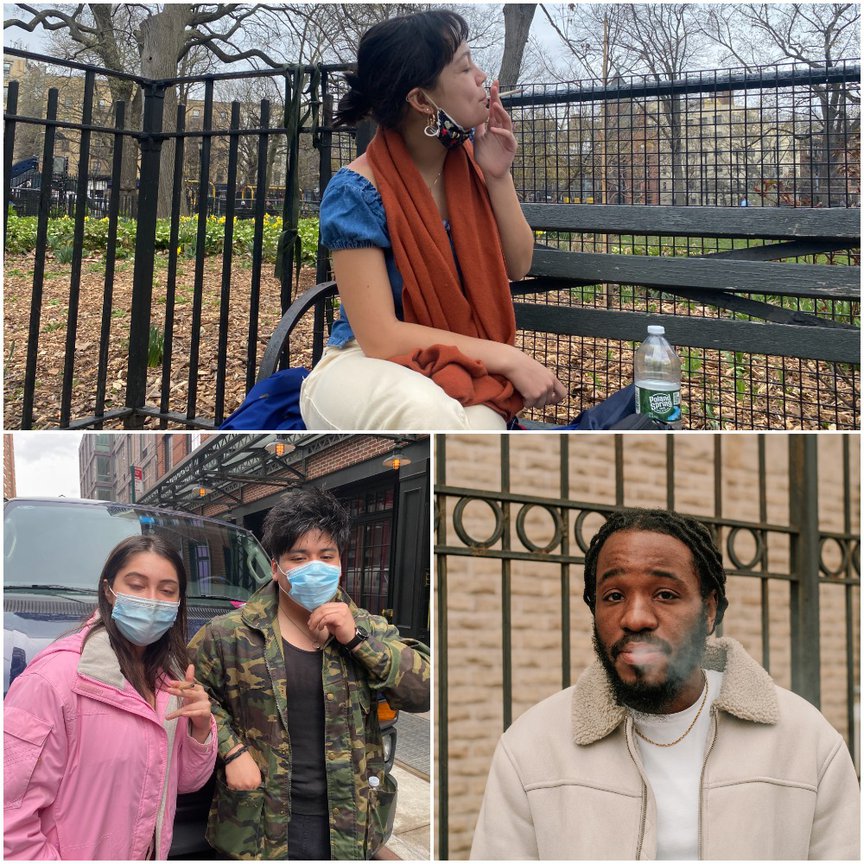 Ivan Torres has been smoking weed in New York City for more than four decades. As arrests began to soar in the late 1990s, he said he was one of the tens of thousands of Black men charged for low-level marijuana possession, earning a criminal record that followed him for much of his adult life.

On Wednesday afternoon, hours after Governor Andrew Cuomo signed a bill officially legalizing marijuana in New York, the 62-year-old sat on a bench in Bed-Stuy and smoked his first ever legal spliff. “I never felt like I was doing anything wrong,” he told Gothamist. “Things have definitely changed for the better.”

The passage of marijuana legalization has prompted similar exhalations of relief and bliss from New Yorkers across the city. Some have predicted that recreational cannabis will usher in a Roaring Twenties-style summer of hedonism. Others simply wondered what took so long.

“We’ve been waiting on this awhile now,” said Jahir, a Bushwick resident. “It’s dope, man. Literally it’s dope. I’m so happy.” (Several people who spoke to Gothamist declined to give their last names, citing fear of possible employment consequences, among other reasons.)

Under the legislation — known as the Marijuana Regulation and Taxation Act (MRTA) —  public consumption of marijuana is now permitted wherever it’s legal to smoke cigarettes. The records for those who violated the previous prohibition have been automatically expunged, and anyone over the age of 21 can possess up to three ounces of cannabis.

“That’s today? That’s crazy!” replied Emma Callahan, a 22-year-old New York University student, upon learning the news. “We picked a good day to meet up,” she added, passing a joint to a friend in Tompkins Square Park. (It remains illegal to smoke in city parks, though the penalty is a civil infraction, like littering, rather than a criminal offense.)

“Can I Smoke Weed On The Street?”: What You Need To Know About Legal Marijuana In NY

While arrests for marijuana have dropped in recent years, the NYPD has continued to issue thousands of summonses each year for marijuana use, almost exclusively to people of color. Several people told Gothamist that legalization had effectively enshrined a right that white people already had in the city.

“It’s been so unfair to certain populations, so thank you, thank you New York for doing this,” noted Marlene Reisman, 70. “Congratulations New York!” she shouted to her fellow park-goers.

Criminal justice groups specifically praised the plan for its distribution of cannabis revenue — 40% to education, 40% to community reinvestment grants, and 20% to drug treatment programs. While Governor Andrew Cuomo had initially aimed to exercise more control over that funding breakdown, he eventually agreed to the legislature’s version. Mayor Bill de Blasio, who opposed legalization for most of his tenure, also praised the bill.

Among those leery of the new law are New York’s Catholic Conference, Parent Teacher Associations, and NYPD Commissioner Dermot Shea. Recent surveys show that that they are in the minority, with supporters of legalization outnumbering opponents by a margin of two to one.

“I was a little concerned initially,” said Malcolm, a 54-year-old pot dealer on the Lower East Side. After learning that recreational sales will likely not begin for another 18 months, and at costs potentially higher than street prices, he said he’d come around to the idea. “There’s still wiggle room for us entrepreneurs, let’s say.”

For others, the act’s passage signals the start of a high-stakes race to grab a piece of the emerging cannabis marketplace, which could soon exceed $4 billion, according to the New York Medical Cannabis Industry Association.

Steven Phan, the founder of the CBD shop Come Back Daily, told Gothamist he hoped to be selling legal weed (as opposed to the non-psychoactive version currently allowed) from his storefront by next year, with his back room serving as a possible consumption site. He said his goal was to shift the perception of marijuana, emphasizing its health benefits, “in comparison to Deadheads or sitting in a circle with unwashed clothes or whatever.”

Other enthusiasts said that, after watching the legalization push fail in recent years, they were just glad the fight was finally over.

“It’s going to make the city even more great,” George, a 23-year-old New Yorker, said as he lit up alongside an outdoor dining structure on Ludlow Street. “Everything is going to be better.”