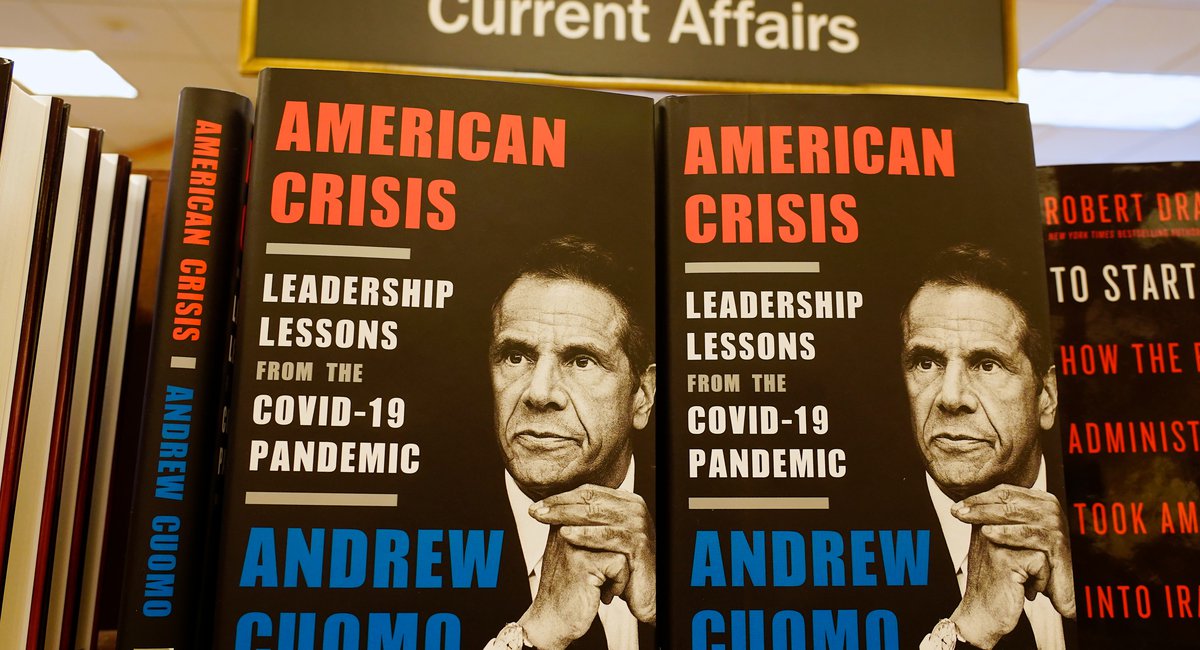 Republican State Minority Leader Robert Ortt lodged a second ethics complaint in two weeks against embattled Governor Andrew Cuomo, in the wake of reports from the New York Times that Cuomo had secured a $4 million book contract for his memoir last summer, around the same time his administration was withholding the number of residents who had died of COVID-19 in nursing homes.

“These latest revelations cast an entirely new light on the motives behind the Administration’s deliberate, months-long effort to cover-up the true number of COVID-related nursing home deaths,” Ortt wrote in a complaint sent to the state’s Joint Commission on Public Ethics (JCOPE) on Thursday afternoon. He cited potential violations of ethics laws that prohibit public officials from using state resources for personal benefit and engaging in financial transactions that might influence their official duties.

JCOPE is the commission that not only gave Cuomo the go-ahead to write his mid-pandemic memoir, American Crisis: Leadership Lessons from the COVID-19 Pandemic, but the one tasked with policing potential breaches of state ethics law. It is stacked with Cuomo loyalists, and according to John Kaehny, the executive director of Reinvent Albany, is “toothless and useless,” and lives up to the moniker of “J-JOKE.” Cuomo’s JCOPE appointees recently blocked an effort by other members of the commission to subpoena records from the executive chambers.

Ortt had filed a similar complaint last week, following reports that Cuomo had secured priority testing for family and friends at the beginning of the pandemic last year, and even had state doctors and nurses travel door to door to collect swabs. He urged JCOPE to consider both issues at its upcoming April 9th meeting, landing the issue squarely at the feet of an agency that’s been widely criticized for its enforcement efforts.

It was the second complaint in the day filed about Cuomo to an agency with limited independent oversight abilities, in part, due to Cuomo’s own influence.

Earlier in the day, the Citizens for Responsibility and Ethics in Washington filed a complaint with the New York State Board of Elections, arguing the governor had violated local election laws by using his campaign email list and social media accounts to promote his book.

“The law says only the Chief Enforcement Counsel has the power to take action to enforce the rules against people who ignore them,” said Kellner. “As far as I’m concerned, that office has been a disaster.”

On Wednesday, the NY Times reported that top Cuomo aides Melissa DeRosa and Stephanie Benton assisted in the editing process, and junior aides were instructed to print copies of the manuscript and deliver it to the governor’s mansion. They were also told to transcribe passages Cuomo had dictated into an iPhone.

Cuomo’s senior adviser Rich Azzopardi denied the allegations that taxpayer money had been used, saying DeRosa and Benton volunteered their time that, “every effort was made to ensure that no state resources were used.”

The Times also obtained early versions of Cuomo’s memoir in which he spent three pages hucking insults at New York City Mayor Bill de Blasio, calling him “annoying and counterproductive” and “one of the worst mayors in modern history.”

“De Blasio’s standing is somewhere between negative and irrelevant,” Cuomo reportedly wrote, adding: “I have accomplished by any objective standard more than any governor in modern history. But I am not a superhero.”

De Blasio clapped back in a less-than-subtle jab. “Tax the rich,” he tweeted.

If state employees on the taxpayer’s dime were directed to work on Cuomo’s memoir, for which he alone benefited, that would be a clear violation of public officers law, ethics experts say. But that ethical quandary is “small potatoes” compared to the larger question of whether Cuomo’s reported $4 million dollar payout motivated him to shield the full scope of deaths of nursing home residents from the public for months, according to Kaehny, agreeing with Senator Ortt’s assessment.

Cuomo’s administration withheld the number of nursing home residents who died in hospitals, rather than inside the facilities themselves, until January 28th of this year, the same day the State Attorney General Tish James released a report on the issue, accusing the administration of undercounting the dead.

“You have to ask, ‘Who is the governor working for?’ He’s getting $4 million dollars from a book publisher, versus $200 thousand some dollars from his governor’s salary. It makes you wonder whose interests he was serving at the time,” Kaehny said. “It’s a striking abuse of public trust.”

And for months, the commission’s approval process of Cuomo’s book deal had been shrouded in secrecy. Cuomo’s administration has refused to release the terms of the ethical agreement or the scope of the book contract. Cuomo’s office has still declined to confirm how much Cuomo made from the book, saying that will be apparent when he files his taxes later this year.

“Why couldn’t they have come totally clean last July?” Kaehny said. “The answer is they know it’s wrong, they know that this looks terrible,” he said, adding it was an example of Cuomo “cashing in on his COVID popularity.”

On Wednesday, the same day the NY Times published their report, Cuomo’s office belatedly released correspondence with JCOPE about the memoir to the Times Union and Buffalo News, who’d filed Freedom of Information Law (FOIL) requests for it seven months earlier.

That correspondence shows Executive Chamber attorney Judith Mogul sent a letter to JCOPE requesting permission for Cuomo to write a memoir on July 10th, the same day he mentioned his book deal for the first time with Alan Chartock on WAMC. It was four days after the release of the health department report that Cuomo’s top aides had edited to exclude the deaths of 3,412 nursing home residents who died in hospitals, according to the New York Times.

“Governor Cuomo is seeking to author a book in the very near future, which will be a memoir of his professional and personal life since his last book, published in October 2014,” Mogul’s letter reads. She didn’t include the amount Cuomo would receive from a book publisher, but asked for an “expedited review” of their request.

Martin Levine, the deputy general counsel of JCOPE approved the request himself a week later. The approval came with certain ethical stipulations, including: “no state property, personnel or other resources are utilized in producing or promoting the book.”

Levine’s sign-off, which bypassed the JCOPE commissioners, has enraged at least one of them, Gary Lavine (not related to Levine) who called the move “illegal and unethical” in a phone call with Gothamist/WNYC.

Walter McClure, a spokesperson for JCOPE, declined to comment on the specifics of the approval process but cited guidance from 2012 that allowed staff to approve without a vote of the full commission. That didn’t satisfy Lavine, who plans to push the issue at an upcoming meeting, where they may finally have the votes to override Cuomo’s appointees on the board due to a recent appointment by State Senate Leader Andrea Stewart Cousins.

“Who’s in charge here?” Lavine wondered. “The staff or the commissioners?”

Correspondence about Cuomo’s memoir obtained by the Times Union:

The latest episode of Celia Keenan-Bolger’s podcast Sunday Pancakes, “How A Relationship To Faith Ca…