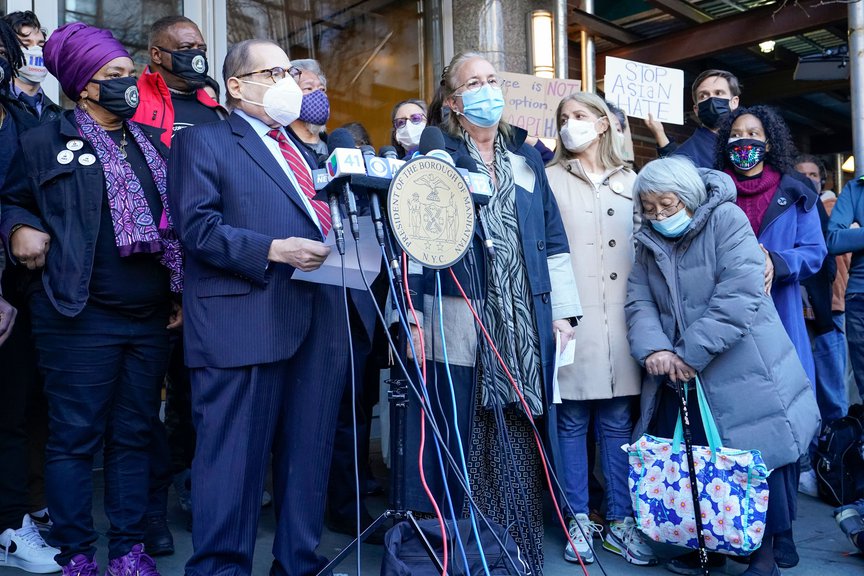 A man previously convicted of killing his mother was arrested in the brutal attack of a 65-year-old Asian woman in Midtown this week, police said.

Brandon Elliot, 38, was charged with felony assault as a hate crime early Wednesday. He was seen in disturbing security footage knocking the woman to the ground, then repeatedly kicking her in the head while shouting: “You don’t belong here,” police said.

Elliot was convicted in 2002 of stabbing his mother to death in the Bronx, when he was 19. He served 17 years for the murder charge, and was released on lifetime parole in 2019.

Police said he was arrested Wednesday at a Four Points by Sheraton on 40th Street near 8th Avenue, where he had been living in a converted homeless shelter.

The victim of the attack was identified by the New York Times as Vilma Kari, a Filipino immigrant who’s lived in New York for decades. She is currently recovering from a fractures pelvis in the hospital, her daughter told the outlet.

The broad daylight assault is the latest in a serious of anti-Asian attacks, a worrisome rise that experts attribute to pandemic-related racism. There have been at least 33 anti-Asian hate crimes recorded by the NYPD this year, up from 28 in all of 2020.

“I am so sick of standing here demanding something be done for my people,” Jo-Ann Yoo, the executive director of the Asian American Federation, said at a press conference on Tuesday. “That woman could be our moms, our sisters, our daughters, your wives… but I don’t want you to look away, because that is what we have been living with.”

Footage of the incident also drew outrage for the apparent inaction of three bystanders, who can be seen watching the assault from the lobby of the West 43rd Street building. After the attacker flees, one of the men appears to close the door of the building, even as the woman is writhing on the ground.

The building’s management company, Brodsky Organization, said that two staff members who witnessed the attack had been suspended pending an investigation.

On Tuesday evening, the Justice Department announced it would prioritize hate crime prosecutions while assisting local police departments in their investigation of such crimes. President Joe Biden also pledged to expand a series of initiatives meant to combat anti-Asian violence.

“Too many Asian Americans have been walking up and down the streets and worrying, waking up each morning the past year feeling their safety and the safety of their loved ones are at stake,” Biden said.

Get Spooked March 31 With a Ghostlight Virtual Theatre Tour