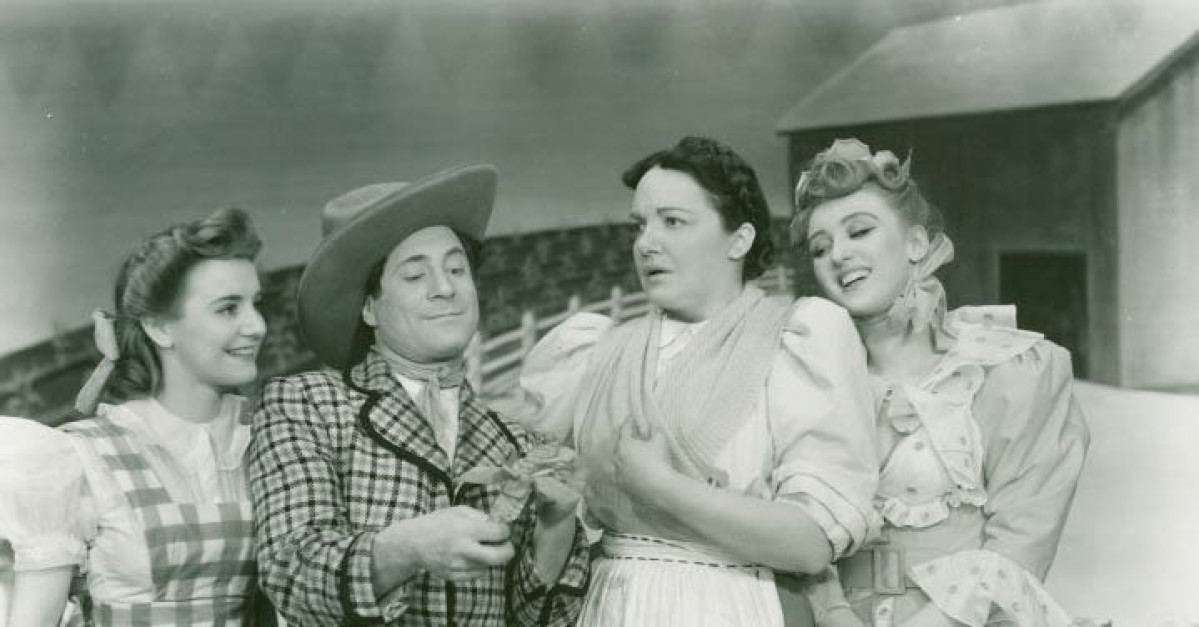 Rodgers and Hammerstein’s classic musical Oklahoma! is based on Lynn Riggs’ play Green Grow the Lilacs, which appeared on Broadway in 1931. Originally titled Away We Go!, the show premiered at the Shubert Theatre in New Haven in 1943, and later at the Colonial Theatre in Boston where it was further developed ahead of its Broadway run.

Renamed Oklahoma!, the musical opened on Broadway at the St. James in 1943 and ran for almost five years, setting records with its 2,212 performances. The show featured a cast that included Alfred Drake as Curly, Howard Da Silva as Jud Fry, Joan Roberts as Laurey, Celeste Holm as Ado Annie Carnes, Betty Garde as Aunt Eller, Joseph Buloff as Ali Hakim, Lee Dixon as Will Parker, and Ralph Riggs as Andrew Carnes.

Oklahoma! tells the story of a confident cowboy competes with a surly, mysterious farmhand for the honor of taking a lovely young farm woman to a dance. The original production featured dance sequences by Agnes de Mille, including a famed dream ballet, that broke new ground in choreography

Look Back at the Original Production of Oklahoma! on Broadway

Since it’s Broadway debut, Oklahoma! has returned to the Main Stem five times, most recently with Daniel Fish’s re-imagined revival in 2019. The Tony Award-winning production, which featured new arrangements and orchestrations by Daniel Kluger, was first mounted at Bard College in 2015. It was followed by a sold-out run at St. Ann’s Warehouse in the fall of 2018 before making its 328-performance Broadway run at the Circle in the Square Theatre.

Get Spooked March 31 With a Ghostlight Virtual Theatre Tour

The NYPD is on track to spend more than $434 million on police overtime this year, about half of wha…

The third and largest stimulus check issued by the federal government during the pandemic—$1,400 a p…