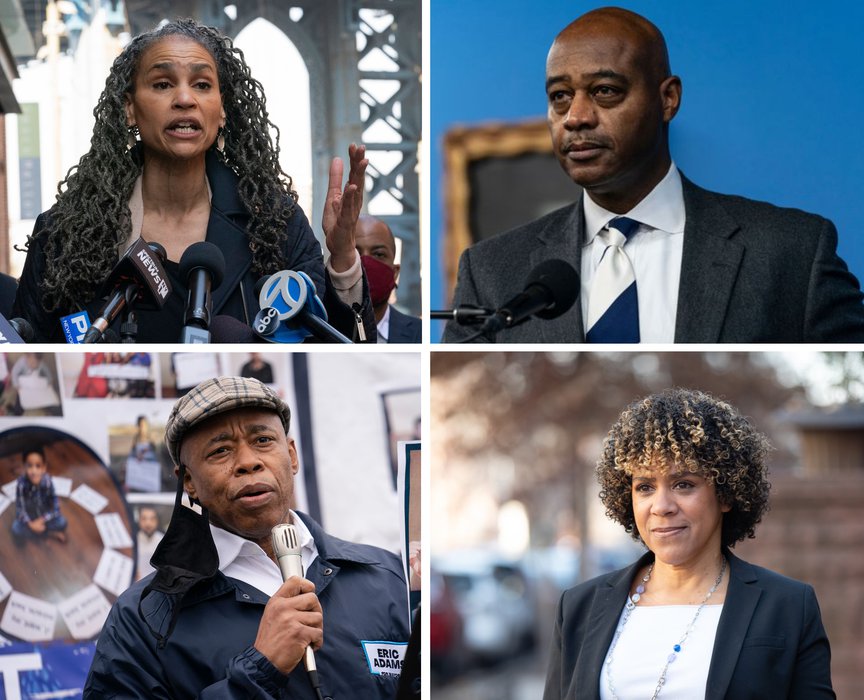 In 1989, when David Dinkins launched his trailblazing run for mayor of New York City, it was far from a foregone conclusion. A soft-spoken 61-year-old Harlem lawyer, Dinkins rose through the political ranks strategically and methodically, serving one term as a state legislator and several low profile positions in city government. After three attempts, he finally secured his dream job.

“Dave had fought tooth and nail to become the Manhattan Borough President,” recalled Keith Wright, who worked as an aide to Dinkins at the time. “That was really all that he ever wanted to do.”

But those around him sensed a bigger opportunity. The year before, Jesse Jackson had won a majority of Democrats in New York City during his historic run for president. Black political insiders looked to Dinkins as a practiced glad-handing candidate who could form the perfect coalition: union groups, progressive whites, and Black and Latino voters.

Still, Dinkins needed coaxing. After some suspense, he announced his bid on Valentine’s Day, during which he told the press: “The question is not so much is the city ready for a Black mayor, but is the city ready to accept an African American who can persuade them that he cares about everybody in this town.”

The answer turned out to be yes. He narrowly won the general election, beating out Republican Rudy Giuliani with the overwhelming backing of Blacks across the city, but also a significant portion of white voters.

Dinkins, who served one term, died in November 2020 at the age of 93 as the city’s single Black mayor.

Now, three decades after he held office, four Black candidates are trying follow in his footsteps by charting a path to City Hall in the Democratic primary. Of the viable Black contenders, the most of any mayoral election in the city’s history, only one—Brooklyn Borough President and former police captain Eric Adams—has ever been elected to public office. He is joined by Ray McGuire, a former Wall Street executive; Dianne Morales, who worked as a nonprofit executive as well as a public school teacher; and Maya Wiley, a civil rights attorney who served as Mayor Bill de Blasio’s legal counsel.

Not to mention the lesser known Black candidates: Quanda Francis, an accountant; Paperboy Prince, a rapper; Jocelyn Taylor, the owner of a general contracting firm; and Isaac Wright Jr., a lawyer.

In both their professional and personal lives, the diversity of these mayoral hopefuls have evoked Dinkins’s trademark descriptor of the city as “a gorgeous mosaic.”

“From police to the not-for-profit sector to the private sector, you have candidates that are from those different walks of life,” said Martha Stark, who was a finance commissioner under Mayor Mike Bloomberg and one of the city’s highest ranking Black appointed officials at the time. “And that speaks volumes, both about what, maybe, has been accomplished, but what there still is to be accomplished.”

With pressing issues around the pandemic, economic recovery, public safety and social justice, the 2021 race has been called the most important mayoral contest of a generation. Add to that a wide-open race with eight leading candidates and the introduction of ranked choice voting, where voters can now choose multiple candidates in order of preference.

“This will be a lesson in political science,” observed Wright, who now heads the Manhattan Democratic Party.

Sid Davidoff, a lobbyist and advisor to several mayors including Dinkins, said he believes there is a higher likelihood this year of New York City electing a Black mayor.

“We often don’t even have a Black candidate in the race, and here you have a choice,” he said. “That’s going to be helpful in giving the path to an African American.”

The advantage, Davidoff argued, comes from ethnic voters who are drawn to multiple Black candidates, putting them down as their first, second, third and fourth choices. In ranked choice voting, if no one wins a majority of votes, a candidate who draws the most second-choice votes can then catapult into the lead.

Primary voters will be able to make these calculations in a year in which race has become a top-line theme for the Black candidates.

Adams and McGuire frequently tap into the struggles they faced as Black boys raised by single mothers; Wiley often invokes her experience as a Black child in a “segregated, underfunded, overcrowded public school” in Washington D.C., while Morales has highlighted her attempt to become the city’s first Afro-Latina mayor.

Their platforms have also been shaped by the racial and economic inequities laid bare during the pandemic, the wave of protests against police violence, largely organized by the Black Lives Matter movement—issues that have placed the Black experience squarely at the center of conversations about fixing government.

Patrick Gaspard, a national Democratic strategist who worked on Dinkins’s mayoral campaign, said the “zeitgeist” is shaping how the candidates handle race.

Gaspard, who has been informally advising Wiley’s campaign, credits the city’s generous public campaign finance program for opening the door to more candidates of color running for mayor. Back in 1989, political leaders pushed Dinkins to run partly because of his connections and ability to raise money among white business interests and liberal donors, alike.

To date, Adams has raised more than $9 million, the most of any candidate in the race. More than $5 million of that total has been in public funds.

Under new voluntary rules, candidates can elect to receive an 8-to-1 match for small qualifying donations from New York City residents. This year, the city has matched an unprecedented amount of taxpayer contributions made to candidates this year.

Of the four aforementioned candidates, only McGuire — the former Citigroup executive who has in large part amassed a war chest through donations from wealthy individuals — has opted out of accepting public funds.

Another equalizer, strategists say, has been the weakening of traditional political institutions and alliances. In Harlem, David Dinkins was a member of the so-called “Gang of Four,” joined by U.S. Congressman Charles Rangel, Manhattan Borough President Percy Sutton, and State Senator Basil Paterson (whose son later became the state’s governor.)

But party bosses, whose support could make or break candidates, have seen their power diminish in the face of outside challengers. The 2016 victory of Adriano Espaillat, who succeeded Rangel to become the first Dominican-American Congressman, was largely seen as the end of Harlem as a Black political power base. More recently, Alexandria Ocasio-Cortez defeat of the Queens party boss Joe Crowley in the 2018 Congressional primary was also hailed as an end to traditional party politics.

Politico recently reported that warring factions of progressives and centrists in the Brooklyn Democratic Party had stalled the endorsement of Adams, who is the closest of the current crop of Black candidates to have come up under the traditional party system. Similar tensions exist in Queens, where Congressman Greg Meeks, who heads the Queens Democratic party, recently announced that the group’s district leaders could not come to an agreement and would skip making an endorsement.

The lack of accord and decisiveness has contributed to fewer political gatekeepers in the Black community, with one notable exception: The Reverend Al Sharpton, the civil rights leader and MSNBC host.

Most experts agree that Sharpton’s endorsement still matters, and candidates (even presidential ones) still make a stop at his National Action Network.

Sharpton has yet to endorse a mayoral candidate.

More broadly speaking, however, the role of the Black church—a once well-trodden campaign stop for candidates and a crucial support base for Dinkins—has become uncertain.

Reverend Brian Scott of Union Baptist Church in Harlem said that he has so far only had conversations with Adams. That only one of the Black candidates had reached out to him was something that he said he has “thought about.”

“Certainly whoever the leadership is, we, as the black church would like to know that they value our interest, and that they will represent our convictions,” he said. “So it’s very revealing.”

But some Democrats view the shakeup and changing of the guard as beneficial to the electoral process.

“Having to appeal more to voters, having to answer to social media, or having to cultivate community groups and so forth, and not rely on traditional political clubs? I don’t think it’s a bad thing,” said J. Phillip Thompson, the city’s current deputy mayor who worked in the Dinkins administration.

In a city where Black residents make up about a quarter of New York City’s population, conventional political wisdom continues to hold that the candidate who can win the Black vote will have a clear advantage, both in winning the election and governing.

In the past four mayoral primaries, the vote share from predominantly Black neighborhoods have ranged from 20% to 24%.

However, defining the “Black vote” has become far more complicated in light of demographic changes. Since Dinkins ran, the city’s Black community has seen a steady influx of Afro-Caribbeans and Africans. At the same time, African Americans with connections to the south have been leaving the city.

Today, more than half of non-Hispanic Black individuals in New York City come from families with Caribbean or other foreign origins. In a shift that speaks to Dianne Morales and her Afro-Latina heritage, the growth in the city’s Latino population has also contributed to the diversity of the Black population—about 13% of those who are Hispanic also indicate on the census that they are Black.

Morales has defined herself as both Black and Afro-Latina.

These demographic changes can, and often do create political divisions.

“Culture, geography, place in the labor market, property ownership, all these things create subtle, but real differences in perspective within the communities,” said John Mollenkopf, a political science professor at CUNY who studies demographic trends.

For example, a sizable number of Afro-Caribbean immigrants are small business and property owners, which can cause them to be more conservative on issues of taxation and property rights. In other words, a more diverse Black community means a more politically divergent one.

How these divisions will play out remains to be seen. So does the extent to which Black voters will vote for Black candidates this year.

Thompson argued that with the city having already reached the milestone of electing a Black mayor, there is not the same sense of urgency around a Black candidate.

“It doesn’t mean that there’s not support for a candidate of color, or for a woman candidate,” he said. “But it’s not the same as 1989, when having someone black, B-L-A-C-K, was considered the thing.”

He likened the political challenge back then as a “huge iceberg that had to be broken up,” before adding, “That iceberg is different now.”

There are limits to identity politics. Thompson and several others pointed to the 2013 Democratic primary, where de Blasio wound up receiving more support in predominantly Black neighborhoods than the lone Black candidate, City Comptroller William Thompson. In the end, political experts viewed de Blasio’s tougher positions on racial profiling and income inequality as having won him more Black voters, who could also relate to his Black wife and biracial children.

For some, the takeaway was clear.

Race or representation still matters, Gaspard said, “But it matters in the context of how one is addressing a set of existential priorities for Black and brown families in the city.”

SNL Recap: Maya Rudolph Shows Us Why She’s One Of The Sketch Comedy Greats

Continuing his incremental push to bring New York back to business as usual, Governor Andrew Cuomo a…