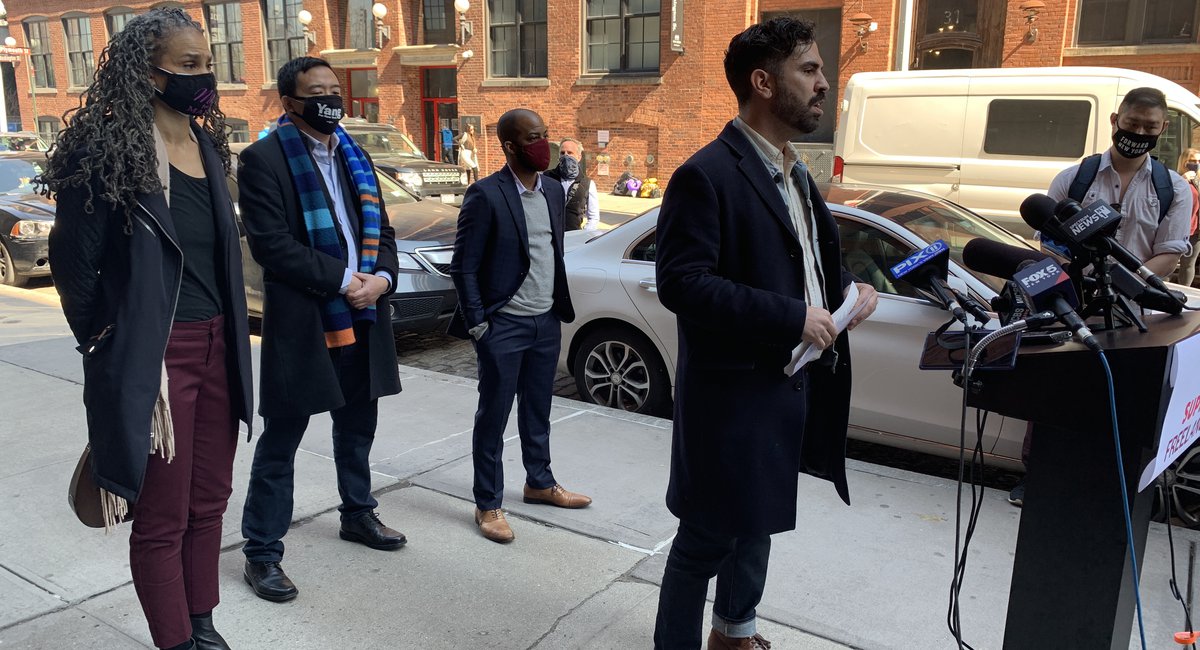 With less than three months before the June 22nd primary in New York City, there are plenty of players looking to sway who becomes the Democratic nominee for mayor. One of the most influential (or at least highly sought after) is organized labor, the umbrella term for the 150 municipal labor unions representing more than 300,000 city workers—such as teachers, police, and health workers—as well as the powerful private unions who represent people in the tourism industry, building cleaners, and airport workers.

Some of the biggest unions already have made their endorsements, taking a political gamble on which candidate might best serve their needs and secure enough support citywide to win the nomination. While a union endorsement is no guarantee all members will support the endorsed candidate, it can be an important part of a candidate’s strategy to assemble a winning coalition. In return, union leaders are banking on having a friend in City Hall when it comes time to renegotiate contracts or lobby on issues that affect workers.

From a candidate’s perspective “you’re looking for building blocks,” said Bob Liff, a Democratic political consultant with George Artz Communications. But he said unions need to make their selections with care, “They don’t want to piss off somebody who might win just because they endorse somebody else.”

The risks of setting up a fraught relationship between labor and management are real. When Mayor Bill de Blasio entered City Hall in January of 2014, he inherited roughly 300,000 unionized employees who were working with expired labor contracts. In the case of teachers represented by the United Federation of Teachers, they had gone more than the four years without raises and benefit changes.

Just days after de Blasio won his first term, the New York Times ran a front-page story warning contract talks could prove “devilishly difficult” for the newly elected mayor, seen as a friend to labor with a stated commitment to addressing inequality.

Enter Bob Linn, a veteran labor negotiator who served as de Blasio’s Labor Relations commissioner. In his first year, Linn struck deals with the teachers and nurses which included back pay and raises along with an agreement to find healthcare benefit savings. He even managed to reach a deal with a group known as the Uniformed Officer Coalition, a group of eight unions representing uniformed supervisors within police, fire, sanitation, and correction agencies.

These early wins set a pattern for future negotiations and now more than 80% of the city’s workers are under contract. Linn said the dynamic between the city and its workers transformed, and even improved, during the de Blasio administration.

“The city works with its unions, listens to its unions,” said Linn. “By and large, labor and management are working together to solve problems and that’s a much different environment than the one we inherited.”

Assuming that the winner of the Democratic primary emerges victorious in the November general election, they are the beneficiary of this renewed sense of partnership. But they will also be staring down serious budget challenges that may make it hard to be as generous as this current administration.

Still, unions who want to secure the best deals for their members know they also need to show that they can organize and get out the votes, which is why labor heavyweights often have strong political operations.

“It doesn’t mean that 100% of their membership is going to vote for that candidate,” said James Parrott, director of economic and fiscal policy at the Center for New York City Affairs at the New School. But he said an endorsement should be considered a boost.

“That 10 or 20% of their membership that is politically mobilized are going to be out there urging all of their friends and family, colleagues, and neighbors to also support that candidate,” Parrott said. “That’s what the difference is.”

Here are labor union heavy weights and what we know (so far) about their 2021 citywide endorsements:

Membership: 150,000 members and 50,000 retirees across multiple city agencies and titles

2021 mayoral endorsement: Eric Adams
The city’s largest union for municipal workers, DC 37, made its endorsement of Eric Adams official on Wednesday, holding a press conference at Roy Wilkins Park in Jamaica, Queens. The union had already signaled earlier this month that it planned to back Adams, calling him a friend to labor and working people.

“Labor is in his blood – his mother was a DC 37 member,” Garrido said in a statement. “He’s stood with us at rallies and marched with us at protests. He knows that New York City thrives when its workers thrive. He’s committed to being the Blue Collar Mayor and friend of labor our workers deserve.”

Bragg has led the union for two years, elected unanimously by its members after the sudden death of its former president, Hector Figueroa, who suffered a fatal heart attack in July 2019. The organization has been a leader on campaigns to increase minimum wage and fight for environmental, social and economic justice.

When Adams accepted their endorsement earlier this month, he said: “There’s nothing fancy about me. I’m just a blue collar guy. I know what you want.”

The UFT has been conducting a rigorous screening process, holding town hall meetings with each of the candidates. Unlike 8 years ago where the contract was one of the defining issues, political coordinator Dermot Smyth said members say this year they want a leader who is ready to get things done and meet the monumental challenges that will come with helping the city recover. “The feedback that I’ve been getting from talking to members around the city is the experience is not something to be poo-pooed,” Smyth told Gothamist/WNYC. “I know in a political world right now sometimes experience is frowned upon, but I don’t know that that’s the case right now,” for UFT members, he added.

The union plans to hold a town hall with the final candidates it’s considering on April 5th and make an endorsement the week after.

Membership: 250,000 active members in health care, plus retirees and their families

Known for their activism and get-out-the-vote operation, the endorsement of 1199 SEIU was seen as a major coup for Wiley.

“Maya’s priorities are our priorities—from investing in and fairly compensating our caregivers to rebuilding our economy through job creation and training,” said Gresham, president of 1199SEIU, in a statement announcing their endorsement.

Gabby Seay, political director of 1199 SEIU, told Gothamist/WNYC that the union plans to run a robust campaign to support Wiley. “Our members will hear from us online talking about our endorsed candidate, talking about ranked-choice [voting], providing them with the political education and the political facts that they need to be able to make these choices.”

The HTC is in a period of transition with a new president who succeeded the long-serving political powerhouse, Peter Ward, who stepped down last summer. He was succeeded by the union’s general counsel, Rich Maroko, who worked with him to negotiate wages and benefits for their members for more than a decade. In a lengthy post on the union’s website Ward noted, “[Maroko] has negotiated the Coronavirus safety protocol at over 160 union hotels, covering over 20,000 members. He has fought back fiercely against those bad employers who have tried to exploit the crisis to get out of paying their employees’ wages and benefits and in some cases, to get out of the Union contract all together.”

As one of the industries most adversely affected by the pandemic, and by their own estimation, an over-development of hotels across the city, it’s unclear if the HTC endorsement will bring with it the same level of political oomph as has in past elections.

Maroko posted a lengthy endorsement announcement for Eric Adams on their website:

“Adams understands the vital need to bring tourism back to New York and his plans to do so include increasing public safety, developing smart COVID-19 protocols across the city, and passing measures to support the struggling hotel industry. He was a vocal proponent of hotel workers receiving the COVID-19 vaccine. Adams also voiced support for city council legislation last year which offered job protections for workers at hotels undergoing changes in ownership.”

RWDSU was the first major union to endorse in the 2021 mayor’s race announcing their decision back in October. In a statement, union president Stuart Appelbaum praised the City Comptroller for his progressive bona fides, describing Stringer as someone who would, “protect and advance the rights of working people.”

“From combatting wage theft to fighting for robust workplace safety protections to championing paid family leave, Scott has always stood up for the city’s most vulnerable and marginalized workers. As a native son of Washington Heights, Scott knows that working people are the lifeblood of this city’s economy. Scott understands what we need for a just economic recovery and he has the values, the experience and the know-how to get it done. That’s why RWDSU is ready to get to work to elect Scott Stringer as the next Mayor of New York City.”

Membership: 150,000 freelancers in New York City, with over 55,000 that are actively engaged with our services.

Past picks: This is the first year the union is endorsing a mayoral candidate
2021 endorsement: Maya Wiley and Andrew Yang

This is the first and so far only organization to dip its toes in the ranked choice voting waters, making a duel-endorsement in the mayor’s race. Union President Rafael Espinal said the organization selected these candidates based because they both understand that an economic recovery in New York City cannot rely exclusively on work through an employer/employee model and must also be cognizant of the daily stressors experienced by gig, temporary and contract workers.

“Both candidates have listened to our concerns and worked to come up with smart plans to address issues at the forefront for independent workers, which include health care, retirement, and wage security,” Espinal said. “I am proud to co-endorse both candidates who will bring their vision and execution to bear on the challenges facing participants in the freelance economy.”

Espinal said they plan to spend the time between now and the primary targeting their members through email campaigns, volunteer efforts and phone banks. “Our goal is to make Yang and Wiley the top two candidates in the Rank Choice Voting process,” he added.

The Broadway Women’s Fund has announced their second annual “Women to Watch” list, including a…