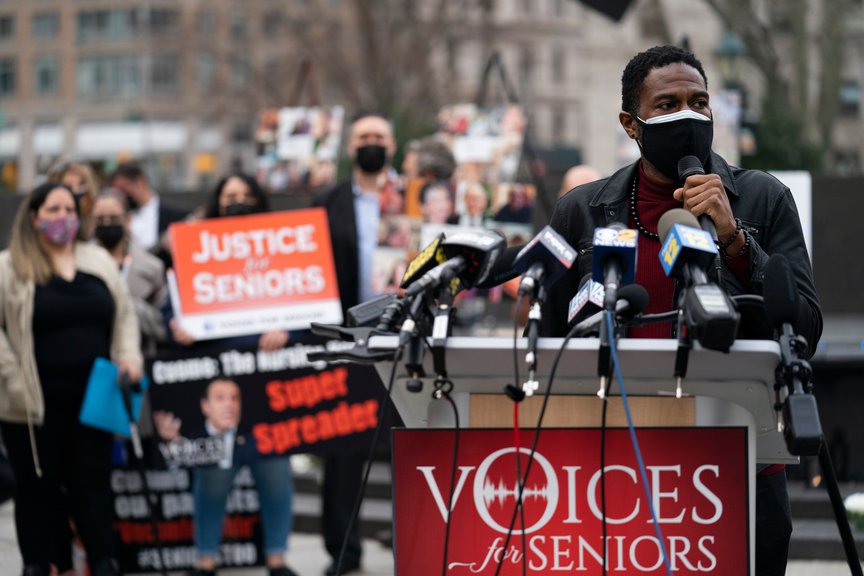 In the wake of yet another allegation that Governor Andrew Cuomo misused his power, the embattled governor headed to the Bronx on Friday afternoon, surrounding himself by allies — this time from the Latino community — at yet another press conference that allowed dozens of supporters but excluded reporters.

Cuomo delivered a 20-minute long soliloquy evoking 9/11 and Hurricane Maria, while conjuring up metaphors of spring.

“What do you do when life knocks you on your rear end? Do you sit there and say, ‘Woe is me,’ or do you say, ‘I’m getting up?’” he asked. “New York says we’re gonna get up and we’re gonna get up better and stronger than ever before.”

At the presser he announced the unveiling of a memorial for Hurricane Maria in Battery Park, as well as a new pop-up vaccine clinic at the New Settlement Community Center in the West Bronx.

Bronx Borough President Ruben Diaz Jr., as well as others who have held the position, were in attendance, while Assemblymember Martiza Davila and former Bronx Assemblymember and SUNY appointee Marcos Crespo beamed in via video message.

“I’m glad to be with Governor Cuomo,” said Fernando Ferrer, the former Bronx Borough President, who’d been appointed by Cuomo as an interim chair to the MTA several times. “I’m proud he’s my governor.”

Last week Cuomo had created a similar spectacle, surrounding himself by Black leaders at a Harlem church in the wake of sexual harassment allegations.

Friday’s presser followed back to back rallies, where Black elected officials and activists and sexual harassment and assault survivors took aim at Cuomo’s efforts in recent weeks to move past the cloud allegations and investigations looming over his administration.

This week a new scandal emerged with media reports that Cuomo had given priority access to COVID-19 tests to his friends and family early on in the pandemic, when it was near impossible for members of the general public to secure them.

Cuomo is facing a federal probe, a state attorney general investigation and an impeachment inquiry into three main areas of conduct; allegations of sexual harassment from at least five current and former staffers; efforts of his staff to withhold data on nursing home deaths; as well as reports of a coverup of structural issues at the Mario M. Cuomo Bridge.

“Just going to a Black church when you’re in trouble does not make you a friend,” said Public Advocate Jumaane Williams at a rally outside Cuomo’s Midtown offices Friday morning, referring to the governor’s earlier visit to Neboh Baptiste Church.

“There are two Black leaders, Andrea Stewart-Cousins and Carl Heastie, trying to put forth a budget and they try to do this time and time again,” he said. “And the governor is the one who blocks them.”

State lawmakers and Cuomo are at an impasse in budget negotiations, the deadline for which is in less than a week. The state legislature wants to raise an additional $7 billion in new taxes on wealthy New Yorkers who earn more than $5 million annually in order to fund a $2.1 billion relief fund for undocumented workers who’ve been excluded from state and federal help, freeze tuition hikes at public universities, and set aside more money for rent relief. Cuomo’s resisted those efforts, saying he’d identified an additional $5 billion dollars that would stave off the need to levy funds.

Shortly after rally outside Cuomo’s offices, the Sexual Harrassment Working Group held a Zoom presser, drumming up legislative support for the Adult Survivors Act, which would open a lookback window for sex abuse survivors to sue, much like the Child Victims Act did in 2019, as well as a package of bills that would extend the sexual harrassment statute of limitations for survivors, ban “no-rehire” clauses in settlement agreements, and close a loophole that excludes legislative and judicial staff from certain sexual harrassment protections.

“He wants to center himself as the victim,” said sexual assault survivor and activist Alison Turkos. She referenced Cuomo’s suggestion earlier this month that he was being caught up in cancel culture. “No sir, you are not. You are being held accountable for the actions you did and your staff was complicit too.”

1868 Birthday of master actor George Arliss, who stars in a series of historical vehicles, including…

The third and largest stimulus check issued by the federal government during the pandemic—$1,400 a p…