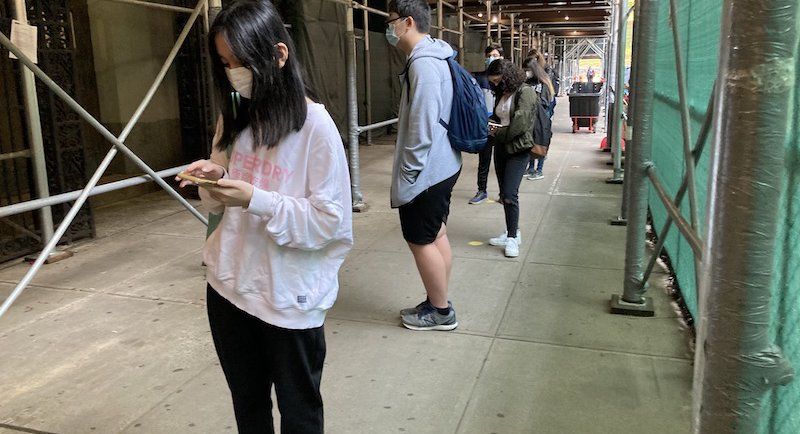 Rattled by the recent wave of anti-Asian violence, one New York City public high school with a large Asian student population has set up a program for teachers to escort kids on the subway for their safety.

Brooklyn Tech High School announced that 15 teachers have offered to ride the subway with commuting students who live in Asian communities in the borough, such as Sunset Park and Bay Ridge.

“Since the start of the COVID-19 pandemic, inflammatory and xenophobic rhetoric, harassment and violence against Asian American and Pacific Islander persons, families and communities have increased,” said principal David Newman in a March 5th email to the school community. “These acts damage our society and counter core values we seek to foster in a Brooklyn Tech education.”

Newman did not reply to a request for comment.

While the program appears to be an unique initiative started by Brooklyn Tech educators, the Department of Education said it was working with NYPD and school safety officers to bolster patrols around transit hubs and specific schools.

“Bigotry, bias, and bullying have no place in our schools or our communities and we stand in solidarity with our Asian-American students and families,” said Nathaniel Styer, DOE spokesperson, in a statement last week. “We are working with the NYPD and School Safety Division to increase patrols around specific schools and transportation hubs to ensure student safety and well-being as our city confronts the recent increase in anti-Asian violence. Our schools play an important role in educating students about how the diversity of our differences makes us stronger, and we commend our dedicated educators and schools’ staff for making sure students are physically and emotionally safe during this time.”

All of us @NYCschools are horrified by the increase in hate-fueled violence against Asian-Americans in New York City and across the country. We stand in solidarity with our @NYCschools Asian-American students, families, and staff. We are dedicated to helping #StopAsianHate.

The program was offered as students returned to high school campuses Monday for the first time since a COVID-19 surge in November switched the school system to all-remote learning.

Most high schoolers are still enrolled in full-time remote learning, with an estimated 55,000 of the city’s 280,000 public high schoolers returning to classrooms this week.

While the Brooklyn Tech administration announced the program before the March 16th massacre in Atlanta of eight people, including six Asian women, the rise in anti-Asian violent crime has been happening for more than a year across the country.

Students and a teacher said Brooklyn Tech has set aside dedicated classroom time for all teachers to hold space for student discussions on the anti-Asian violence, and devoted office hours for students to share their thoughts individually.

“We had two BLM town halls, led by the BSU or Black Student Union. And so I think from their movements, the Asian American students, they all took inspiration and also led a town hall for our school recently. And then, after that town hall I think it really put things in the forefront for the school,” Liu said.

Michelle Cao, a 17-year-old senior at Brooklyn Tech, said she has been encouraged by how students have come together to support each other.

“I feel like part of the student body is really activist, and advocacy-minded, so it makes it really sort of easier, in a sense, to bring together a bunch of students and even some faculty to just have conversations,” said Cao, who lives in Sunset Park. “Even if it’s like 20 people or like 10 people on a zoom call, it feels good afterwards knowing you got to get whatever you had off your chests, and be able to share that with other people as well.”

Cao is enrolled in full-time remote learning but said she was grateful for the subway program as a sign of support from the school. “I’m really happy they came out with an initiative like this (that’s) sort of hands on, and sort of tangible,” Cao said, calling the program “a real world, real solution to a real problem.”

Brooklyn Tech’s administration appears to be alone in offering the subway program. The DOE couldn’t name another school with similar outreach, though they have distributed an updated an Anti-Bias Education Resource Guide across the school system.

Teachers at New Utrecht High School, another Brooklyn school with a large Asian student population, said they’ve not heard enough support from their administration aside from general anti-bullying discussions.

“There wasn’t anything for us, specifically for Asian students and for this problem,” said one teacher, who didn’t want to be identified because she’s not authorized to speak to the public. “I believe students are getting support mainly from the Asian teachers,” said another New Utrecht teacher who didn’t want to be identified. He added of the school administration, “To be fair, they’ve never spoken up for any racial group, in terms of like Black Lives Matter, they never initiated it.”

One student at another Brooklyn high school with a significant Asian population said there has been sporadic classroom discussion but nothing organized. “I guess it’d be nice to see if they acknowledged it,” said Isaac Cheung, 15, a sophomore at Midwood High school. “I’d feel both appreciated and acknowledged in that they would be aware of the issue, because other students from my school can also get educated about this, and they’ll find ways to help.”

Liu, the Brooklyn Tech teacher, said she admired the sophistication and intersectionality of the activism among the students.

“I really appreciated that they expressed… the Asian movement should not be centered on anti-blackness. It should be more solidarity among Asian and Black students who tackle white supremacy,” Liu said. “I was like, ‘that’s very, very cool, kids.’

The In the Heights movie teased fans with the promise of a new trailer this weekend, and all that pa…