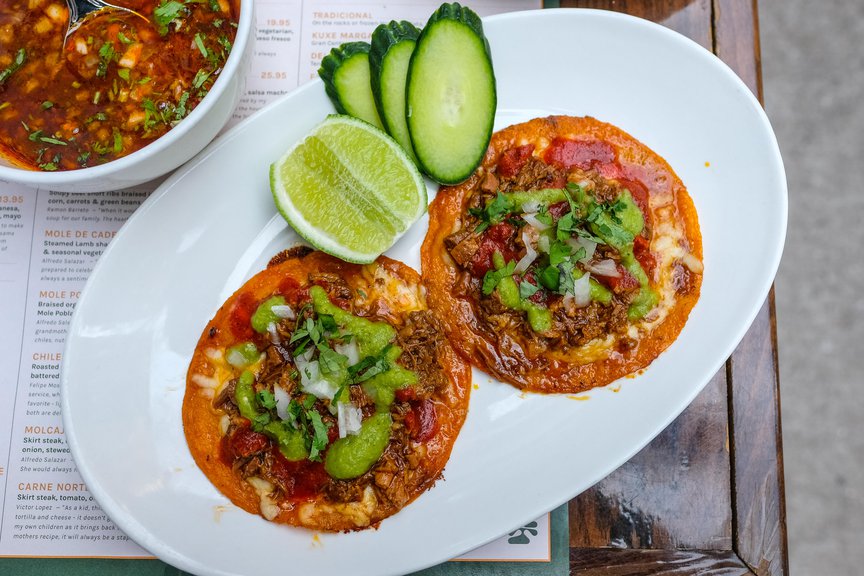 There are several things going on at Kuxé on Thompson Street, and all of them are good. First, you should know that this new “authentic fonda” of a restaurant is from Julian Medina, and it’s a reworking of the Toloache that had been serving here since 2013 (his other two Toloaches, in Midtown and on the Upper East Side, remain open). The interior has undergone some friendly design changes–bright wallpaper replaces the moody brick; snazzy new booths now sit by the big front windows—but the basic layout and swirly tile floor remain the same, so you may be it by a hint of familiarity.

Most important, the menu at Kuxé is entirely new, and it’s filled with hearty homestyle cooking, much of it derived from the techniques and traditions of Puebla, a state in the southeast of Mexico where many of Medina’s team hail from originally. It all has a very personal feel to it, too. Medina called upon chefs from all eight of his restaurants to contribute their favorite flavors and recipes from childhood, and gave them space to tell their stories, both in the kitchen and printed on the menu, which pairs a personal anecdote with each dish. It’s a concept that not only brings a degree of honesty to the food, but also ensures that the entire operation is grounded in comfort, family, and community.

Kuxé is the indigenous Totonac peoples’ word for “corn,” and, unsurprisingly, the house-ground and -nixtamalized masa plays a big part in your dining pleasure here, whether as tortillas, quesadillas, tacos, memeles, tetelas, or tlayudas. There are seven different tacos available, and these might be the star of the show. You can get Tacos al Pastor, starring pig and pineapple; Tacos de Panzade Borrego, with lamb stomach and pickled vegetables; Medina’s favorite Tacos de Coliflor Conchita, the taste of which he says brings him back to his “family trips to Yucatan;” and, perhaps inevitably these days, some first-rate Tacos de Birria, those brisket and red chili delights, dipped in fatty consome for best results, that have taken the city by storm.

Other sharable starters (though, really, you can easily make a entire meal from the “Tacos y Mas” section) include a fantastic, can’t-wait-for-summer Tostada de Ceviche, piled high with fluke, shrimp, and avocado; some stellar Guacamole which, in addition to the usual tostadas, arrives with a slab of crackling chicharron); and an equally good Picadita de Chorizo, loaded with funky pork sausage, made in-house, and topped with crema, salsa, and queso fresco. I hear that the Cemita is also excellent, a sandwich stacked with chicken milanesa, quesillo, chipotle, beans, greens, and avocado, all on a sweet sesame bun. Kuxé’s head chef Juan Velazco says, “whenever it was my birthday, I would ask my grandmother to make me this.”

Proper entrees, or platos, are all served with hand pressed tortillas and some very good, very porky rice and beans. We devoured our Mone de Pescado, a cod fillet steamed in a banana leaf and laid atop a bed of sweet plantains, but everything over in this section sounds like a potential winner, like the vegetarian Enfirjoladas, the Molacajete Volcán with its skirt steak, chorizo, chicken, and shrimp. And then there’s the Mole de Caderas, a lamb shank stew that chef Alfredo Salazar calls “the definition of a comfort dish.”

You will also want to absolutely save room for dessert, at least to split the delicious, pineapple-filled Mexican Baba ay Rhum.

Kuxé has a full slate of special cocktails, most of which are $13, as well as a selection of beers, $8 Micheladas, and a bunch of wines. You can enjoy all of the above while dining inside (current legal capacity is 45 people, which includes the soon-to-be-opened second floor space), or outside at one of the sidewalk two-tops, or stowed away within a private curbside “cabana.”

The U.K.’s Barn Theatre will present a live stream of Matthew Harvey’s song cycle Now or…

The New York City-based company Revel, best known for its moped-share program, is hoping to crack in…