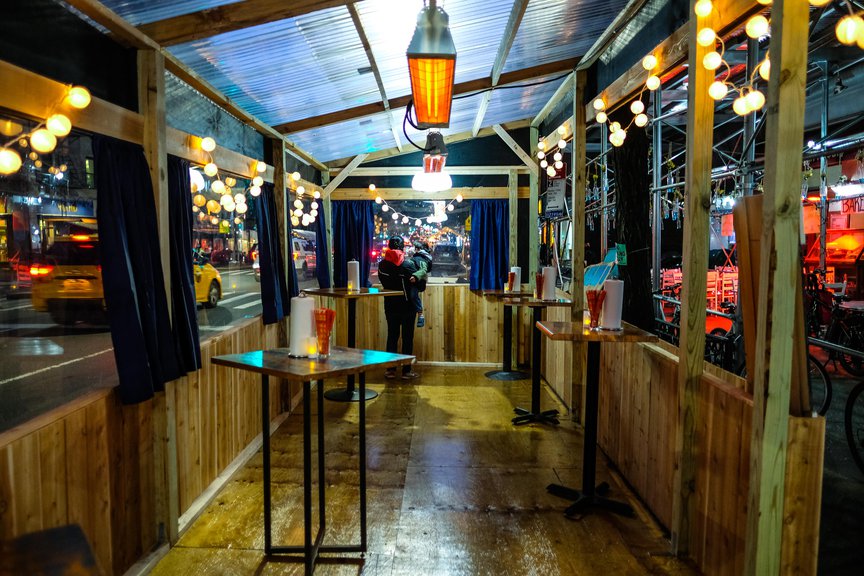 A new survey by the NYC Hospitality Alliance finds 75% of more than 400 restaurants and bars reported their 2020 revenues fell by more than half compared to 2019. Another 21% of businesses said their revenues were down by 26-50%.

“It basically confirmed so many of the different conversations we’ve had over the past year with restaurateurs telling us that they’ve been unable to operate and pay their rent and afford other expenses,” said Andrew Rigie, executive director of the NYC Hospitality Alliance. “They’ve either been shut down 100% or had their occupancy severely limited,” he added, “and they couldn’t really survive well on just doing takeout and delivery.”

Restaurants were among the hardest hit businesses in the city after the COVID-19 pandemic struck last March. Some were able to lean more heavily on deliveries, which carried their own fees, but outdoor dining couldn’t make up for the loss of indoor seating.

The industry just won $28 billion in the new federal stimulus through grants that can be used to cover rent, payroll, utilities and other expenses.

Jeremy Wladis, who owns the Upper West Side restaurants Good Enough to Eat, Hachi Maki, and Harvest Kitchen, said he’s grateful for payroll aid in the first stimulus. He said he used it to keep employees, even if they had fewer hours.

“We think it’s important,” he said. “I mean you go to so many neighborhoods and they’re just empty storefronts and nobody walking around outside.”

But he said overall revenues at his three New York City sites declined by more than 50% across the board in 2020 compared to 2019. He also owns restaurants in North Carolina and Washington, D.C.

In its survey, the NYC Hospitality Alliance found 49% of restaurants said rent assistance is the most critical form of support they need while COVID-19 restrictions remain in effect. And half of respondents reported an average weekly revenue dip of 90-100% in January 2021 compared to January 2020.

Rigie said these findings show the industry needs additional help. Although the occupancy limit in New York City just went up from 35% to 50% this week, he said it should be 75%, like other parts of the state. He also said the 11 p.m. curfew should also be abolished or at least pushed to midnight. He said the rollout of vaccines makes indoor dining safer.

But not everyone feels comfortable with the current pace of reopenings for restaurants, fitness classes and other activities. New York City’s seven-day COVID-19 positivity average is still above 6% and experts wonder if new variants are playing a role.

Noting that stadiums and large outdoor venues are scheduled to open at 20% of capacity in early April and entertainment venues at 33%, Public Advocate Jumaane Williams called on state and city leaders to take a pause.

“Right now, New York is in a race between vaccines and variants,” he said at a press conference Wednesday. “It’s neck and neck.”

He said reopenings should be rolled back until vaccination efforts expand more.

Restaurant workers were given earlier access to vaccines than other groups of New Yorkers. Wladis said he thinks customers will start feeling more comfortable soon.

Start your next NYC chapter loving where you live. 5241 Center Blvd is the latest luxury rental to o…