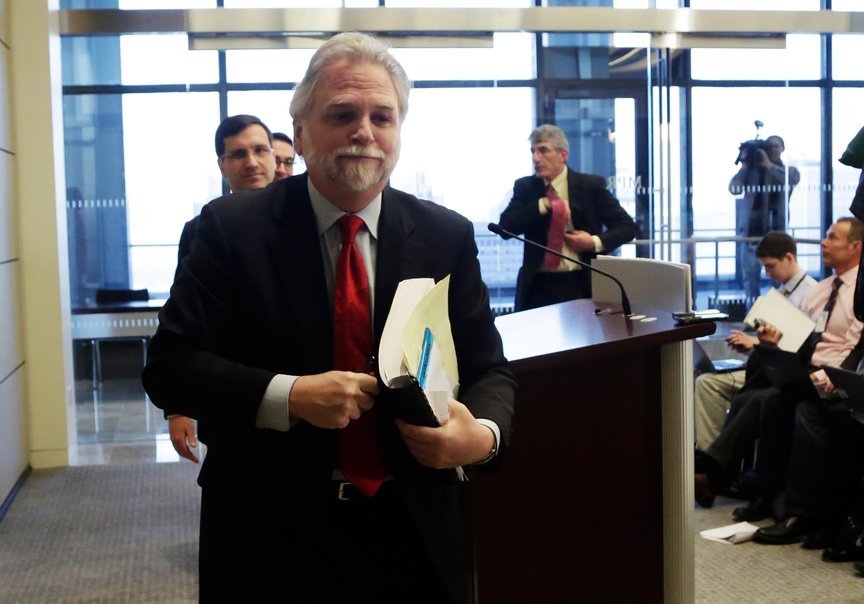 Ramone Buford had just stepped out of the shower on a recent Friday morning when two heavy-set men dressed as plumbers appeared at his door. They claimed to be investigating a leak coming from his bathroom. Buford, who had moved into the Harlem studio apartment from a homeless shelter just weeks earlier, let them in without a second thought.

Days later, Buford got a call from his lawyer. The men, he would soon learn, were not plumbers but former NYPD detectives, now working as private investigators to confirm his address. They were hired by Randy Mastro, an attorney for an Upper West Side group that has spent the last seven months trying to evict homeless men from an emergency shelter in the neighborhood’s Lucerne Hotel.

A March 12th legal filing submitted by Mastro includes a photo of Buford, standing shirtless inside his own apartment, taken by one of the private eyes without his knowledge. Buford sees their intrusion as part of a continued trend of harassment he says he’s faced for speaking up on behalf of shelter residents.

The 51-year-old rose to prominence last summer as one the most outspoken Lucerne resident, pledging to find common ground with the Upper West Siders who wanted the shelter moved. Since leaving a foster home at the age of 12, he had bounced between shelters and the street for decades, before landing subsidized permanent housing through the city in February.

“I was just getting to know what it’s like to have a good night’s sleep,” he told Gothamist. “To now become a target of them is horrifying…I’m right back on guard. Every little sound I’m jumping up.”

The incident marks the latest chapter in a fierce battle over the fate of the Lucerne, where more than 100 men are still living, despite ongoing attempts from the city to have them removed. Following outcry — and threats of violence — from some Upper West Side residents, Mayor Bill de Blasio agreed late last year to relocate the men to a Radisson hotel downtown. In January, a state appeals court overruled that decision, allowing the men to remain at the Lucerne while it takes up the case.

Both Mastro and the de Blasio administration have pushed the court to lift the stay, most recently citing the fact that Buford and the two other named petitioners, Larry Thomas and Travis Tramell, have since moved out of the Lucerne and into permanent housing. There are now 123 men living at the shelter, down from a high of 283 when it opened this summer, according to the city.

In his own affidavit, Buford questioned the city’s “sudden interest” in moving Lucerne residents to permanent housing, noting that the three petitioners in the case were among the first to be transitioned. “I would like to think that the City is making these efforts in order to improve our lives,” he wrote. “But part of me believes that the City is doing this in order to achieve politically that which it could not achieve in Court.”

Isaac McGinn, a spokesperson for the Department of Homeless Services, maintained that the transfer of residents to homes had nothing to do with the ongoing case. He described Mastro’s use of the disguised investigators as an “absolute egregious invasion of this individual’s privacy.”

Mastro, meanwhile, pointed Gothamist to a motion filed on Monday, in which he argues that he had no choice but to hire the investigators because Buford’s attorney declined to acknowledge his client had moved out of the Lucerne (the attorney, Michael Hiller, denies this).

“That Mr. Buford now makes the bald and baseless claim that he fears for his physical safety—attributing his fear, in part, to our clients, all law-abiding, peaceful and long-time Upper West Side residents—is nothing short of ludicrous,” the filing states, “especially since Mr. Buford so obviously craves the limelight, dubbing himself the ‘Homeless Hero,’ making regular media and other public appearances, and tweeting [to] his many followers daily.”

The filings were presented by Mastro on behalf of the West Side Community Organization, a nonprofit created by residents opposed to the new homeless shelters in the neighborhood. The group raised $180,000 this past summer.

State Assemblymember Linda Rosenthal, who represents the neighborhood, questioned whether the group’s members knew their money could be used to pay for the “stalking” of someone who no longer lives in the neighborhood. “It’s beyond the pale,” she said. “They took advantage of his experience as a homeless person.”

Despite not living in the shelter anymore, Buford said he was deeply invested in the decision of the state appeals court, which is expected to be issued in the coming months. He has continued to attend substance abuse counseling offered by the Lucerne, and has a job through a grant-funded program linked to the shelter. Beyond that, Buford said, he was fighting for the dignity of shelter residents across the city.

“The fact that we’ve prolonged this legal process angers the mayor and angers Randy Mastro,” Buford added. “They look at me like I’m a little old homeless guy who won’t go away.”

Inside the Broadway Community Project: Hats Off (or On!) to Broadway Milliners

The latest episode of Celia Keenan-Bolger’s podcast Sunday Pancakes, “Laura Benanti on the Power and…

How to rev up New York City’s economy post-pandemic is a cornerstone theme in the race for mayor, wi…