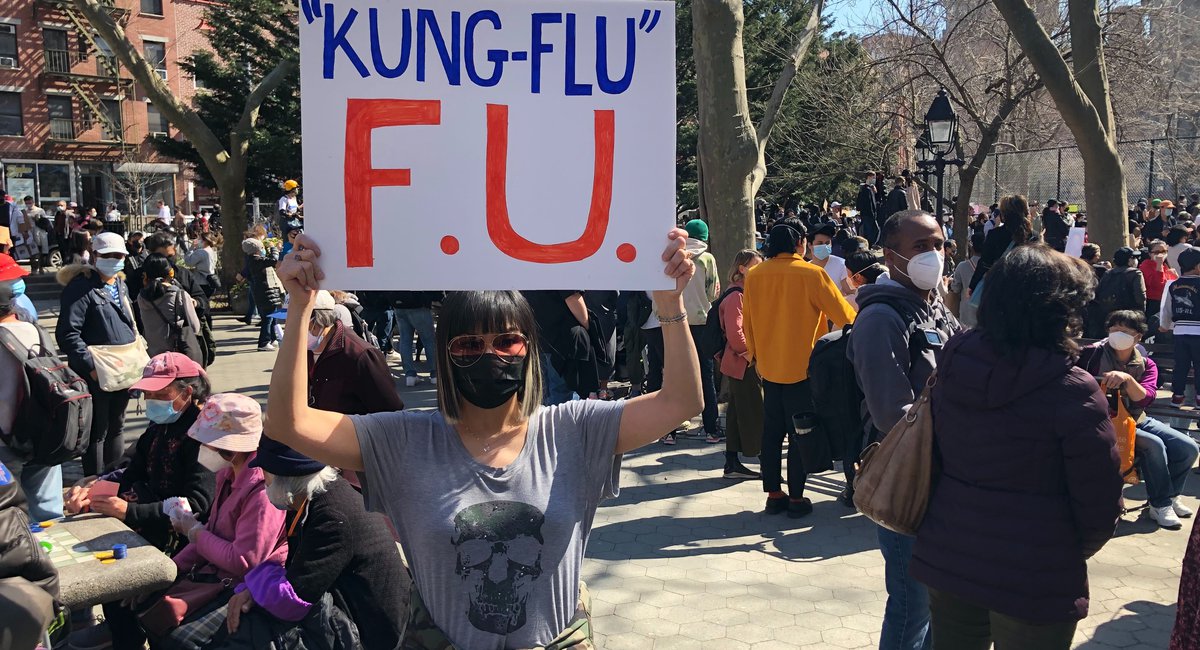 Thousands of demonstrators crowded in and around Columbus Park in Manhattan’s Chinatown on Sunday in the wake of the mass shootings in Georgia that left eight people dead, including six women of Asian descent.

The Rally Against Hate, as it was billed, prominently featured both Asian American and Black speakers, sharing a common refrain that the communities had to align in opposition to white supremacy.

“Let’s not let the skin color or our ethnicity and culture fool each other,” a Black organizer, Kelvin Coffey, told the crowd. “We are in the same fight.”

“Their fear is that they gonna become the minority,” he said, loosely referring to white conservatives, “because they know that we outnumber them together. So let’s not let them dismantle what we see here.”

One of the organizers of the event, Jennifer Yu, said that beyond sending a message “to stop Asian hate” there were complex issues that had to be addressed.

“Our Asian elderly and women have long been unseen and invisible,” said Yu, the co-founder of Welcome to Chinatown, a group that advocates for local businesses and community needs. “We’ve seen this far too many times working directly with our Asian community facing skyrocketing unemployment and food insecurity because of xenophobia and racism and then COVID’s inevitable impact. As an Asian female-led grassroots organization, the increase in anti-Asian violence hits deeply.”

NY Assemblymember Yuh-Line Niou gave an impassioned speech, telling the crowd that racism is “state-sanctioned… All of our history is rooted in racism, it is rooted and founded to keep the few people who benefit in power.”

Another organizer, Ben Wei of the group AAPI Against Hate, added that “it was important to bring people together to raise awareness to the fact that there has been an 800% increase in hate crimes in NYC, and to let the country know that our community is incredibly distraught over the Atlanta murders.”

Several speakers urged the crowd to push back against any efforts to increase policing in light of the attacks.

“Calling for carceral states, the perpetuation of black criminality, all that shit we need to reject,” said one Asian-American speaker, drawing sympathetic boos from the crowd.

The event drew some students, including Ted Lee, 16, who attends Stuyvesant High School and said the attacks in Georgia were “specifically targeting Asian women” and had caused him to worry about his own mother, who stood nearby.

The day of the demonstration was itself marked by violence. Not long before the rally began, an Asian woman walking to the event with her young daughter was assaulted by a man in Astor Place. Police say the man demanded the victim’s protest sign, stomped on it, and punched her twice in the face. The NYPD Hate Crimes Task Force is currently investigating the incident.

The stage adaptation of Priscilla, Queen of the Desert opened at the Palace Theatre March 20, 2011. …