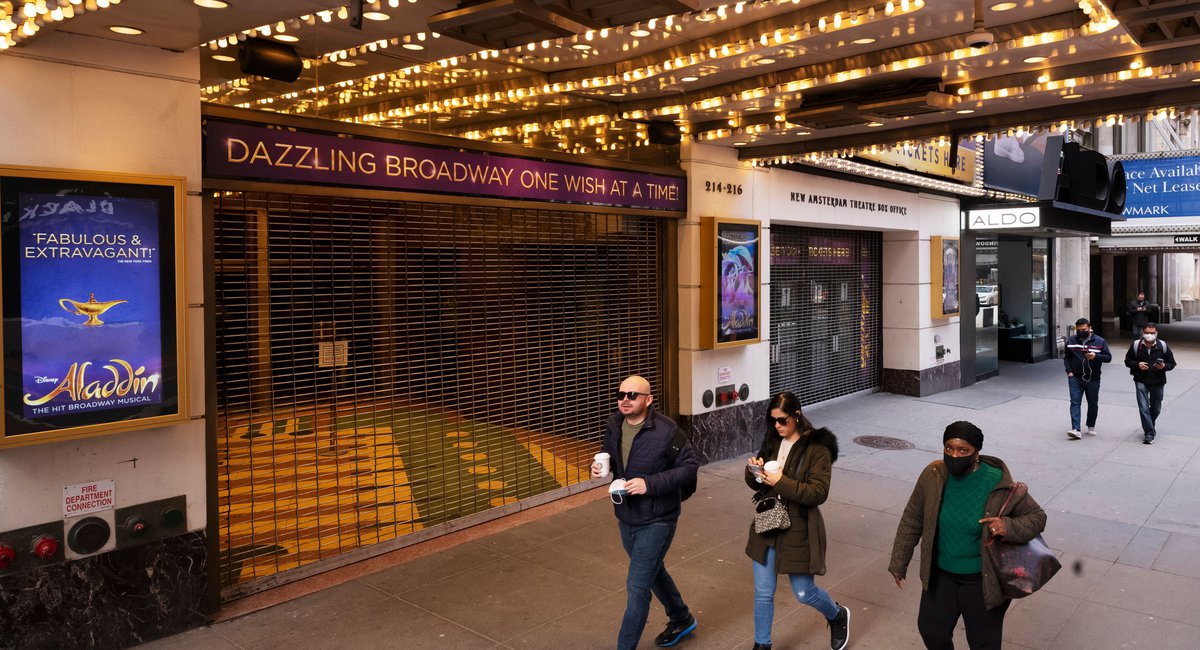 And remember “yellow zones”? Those are changing too.

The reopening protocols are dizzying and difficult to keep track of, so here’s a guide of what to expect in the coming weeks. Some changes start Monday.

Keep in mind that the upcoming restrictions could change again as the state’s progress on COVID-19 fluctuates.

“Is this being done because of what the data and science is telling us, or is this being done for political reasons?” de Blasio asked during a press briefing on Thursday. “Because it sure as hell looks like a lot of these decisions are being made by the Governor because of his political needs.”

Yellow zones required that restaurants only hold four people at a table indoors and outdoors as well as keep houses of worship to 50% of the maximum capacity, among other measures. Business owners in the districts felt forgotten, as yellow zones hadn’t been updated since late January, NY1 reported last week.

In public places, gatherings can rise from 50 people to 100 people indoors and 200 people outdoors beginning Monday.

At residences, outdoor gatherings will rise to 25 people, but shall remain at 10 people indoors.

Public high school students return to in-person classes—but a strict threshold for how many COVID-19 cases can shutter a school has resulted in dozens of school building closures even when in-person learning is supposedly open. As of Friday, 67 school buildings citywide had been closed for 24 hours and another 180 were currently closed for an extended period.

Stadiums that can hold 10,000 people or more can reopen at 20% capacity. That means around 8,500 people at Citi Field and nearly 11,000 people at Yankee Stadium could go to a socially distanced game.

But those attending have to show they’ve received both doses of the vaccine or proof of a recent negative COVID-19 test.

Other sports venues that have the capacity for 1,500 people inside and 2,500 outside must follow stricter guidance. The restrictions for those venues is set at 10% capacity indoors and 20% outdoors, with the same vaccination or negative test requirement as well.

The governor’s office said the state health department would “re-evaluate the testing and vaccination entry requirements in May.”

Here’s where it gets a little confusing.

Even though the governor announced performing arts venues can reopen at 20% capacity outdoors on the 1st, the guidelines are slightly different a day later without the vaccination or test requirement for arts and entertainment venues.

Arts and entertainment venues can reopen at 33% capacity with up to 100 people indoors and 200 people outdoors, the governor announced earlier this month.

That limit rises to 150 people indoors and 500 people outdoors if individuals show proof of a negative test result, which would be around 20% capacity of a 2,500-person outdoor venue, for instance.

Shakespeare in the Park will return under the venue guidelines on July 5th. Some indoor venue owners aren’t so sure about reopening that soon. Following protocols around testing, keeping staff safe, and making capacity restrictions financially feasible are challenges with reopening.

An 11 p.m. curfew for casinos, movie theaters, bowling alleys, billiards halls, and gyms and fitness centers will be lifted.

Of note: the 11 p.m. curfew for bars and restaurants as well as a midnight curfew for catered events will remain in effect, but the governor’s office said last week that “both curfews will be evaluated in late April.” The NYC Hospitality Alliance wants the curfew scrapped for other establishments, the Associated Press reported.

COVID-19 restrictions are frequently shifting as the state’s progress on the pandemic changes. We’ll update when new announcements are made. This article was last updated March 21st.

Watch the music video for “Holdin’ On,” the latest single from funk liberation band Britton & Th…