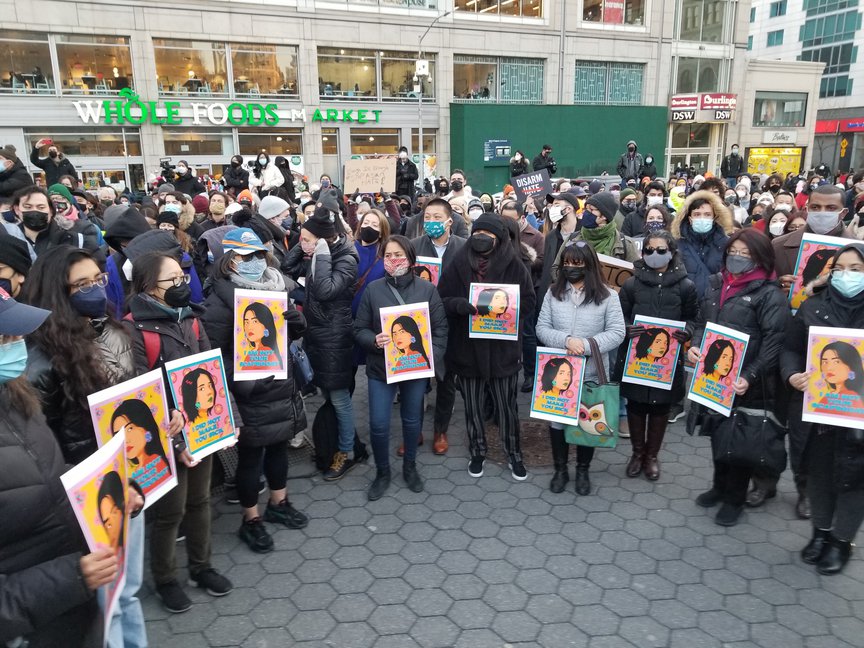 Hundreds of New Yorkers gathered in Union Square Friday night for a vigil mourning the eight victims, including six Asian women, of the Tuesday massacre targeting three Atlanta massage parlors, amid a national crisis concerning hate crimes against people of Asian descent in New York City and across the country.

The vigil, organized by the Asian American Federation, saw numerous elected officials and advocates speak to the anxiety Asian New Yorkers, and Asian-Americans nationwide, have faced over the past year, and especially in the last few months. Speakers included U.S. Senator Chuck Schumer, Public Advocate Jumaane Williams, and City Comptroller and mayoral candidate Scott Stringer; others, such as mayoral candidate Andrew Yang, were in attendance but did not speak. The roster also included leaders of several Asian-American civic organizations and other community groups.

Perhaps the most well-received speech came from Queens State Senator John Liu, who recounted in vivid detail both the ceaseless racism he has experienced throughout his life as an Asian-American, and the raw emotion he has felt in the wake of both the Atlanta massacre and a substantial uptick in hate crimes against Asians in New York City.

“I really hope this is the culmination of the hate and bigotry that Asian-Americans have faced,” Liu, who was the first City Council Member and citywide elected official of Asian descent, said. “I pray that there will not have to be another vigil in this seemingly never-ending spate of hate against Asian-Americans.”

Liu recounted an incident from this past week at Bowne Park in his district, where a 13-year-old boy was shoved, had basketballs thrown at him, and was told “go back to your country.” He also made note of the recent incident in the East Village where Maura Moynihan, daughter of the late U.S. Senator Daniel Patrick Moynihan, told an Asian-American woman to “go back to communist China,” and then defended herself by invoking Tibet. And he noted the constant refrain of people saying “don’t give me COVID,” or avoiding Asian-Americans on the street.

Most elected officials who spoke were received warmly, but there was one notable exception: Mayor Bill de Blasio, whom the audience booed and heckled for the duration of his speech, in which he asked for the victims of anti-Asian hate crimes to come forward to authorities; many attendees shouted at him to “defund the police,” for instance, reflecting a notion at the event identified by several speakers that deploying the police to address the increase in violence was neither effective nor desired by communities.

The mayor arrived midway through the event and approached the podium, and after his short remarks, which lasted for about 90 seconds, he was followed to his car by vigil attendees, to shouts of “what are you gonna do.”

The mayor’s chilly reception underscored the degree of anxiety Asian New Yorkers have faced throughout the pandemic, as they’re subjected to a litany of abuse by those who bigotedly blame them for the COVID-19 pandemic, and the urgency with which the problem needs to be addressed.

Hate crimes and instances of bias against Asian-Americans, in New York City and nationwide, have seen a substantial rise over the past year since the pandemic began; the incidents against Asians frequently relate to the virus, which was first detected in China, and the notion that Asians are somehow responsible for it. Women and elders face particular abuse; incidents range from being told to “go back to China,” to being spat on, to full-on physical assault.

These incidents were egged on, if not endorsed, by numerous prominent right-wing politicians and media figures, most notably former President Donald Trump, who made, and continues to make, a point to refer to the coronavirus as the “China Virus” or the “Wuhan Virus.”

The result of the yearlong pandemic, coupled with a yearlong hate campaign from powerful figures, has been palpable for Asian New Yorkers.

“Some folks, they see me coming, and then they block my direction. And then they jump and yell at me,” Sue said. “It probably has something to do about thinking somehow I caused the virus, the pandemic.”

Sue said that he thinks the problem is getting worse even as restrictions are lifted and life slowly returns to normal.

“It’s gotten progressively worse,” Sue said. “Now, it’s gotten even more worse because people are now out and about, with the pandemic starting to subside a bit.”

The NYPD’s Hate Crimes Dashboard lists 27 incidents with 21 arrests in 2020 of hate crimes against Asians, compared with just one incident and one arrest in 2019. But, as many speakers at the event noted, most such incidents go unreported.

The NYPD’s number also doesn’t include instances of bias against Asian-Americans. State Comptroller Tom DiNapoli, who was at the vigil, told the crowd there had been over 700 reported “anti-Asian incidents” in New York City over the past several months. And that’s just what is being reported.

“How many multiples of that 700, in fact, are happening in our streets each and every day,” DiNapoli said.

These incidents have left many of the city’s Asian-Americans fearing whether they could be next, and is negatively impacting community businesses. Many Asian restaurants, for instance, are closing their doors early at night to allow employees to get home safely. The fear has only heightened in the wake of the Atlanta massacre, and made the need for solidarity among community members and allies that much more pressing.

“We’re here because we all know that our community deserves better. Our workers deserve better, our mothers, sisters, aunts, and daughters deserve better,” said Jo-Ann Yoo, executive director of the Asian American Federation, the main event organizer. “We are here standing together because we are sad, we are angry, and we are exhausted.”

Attend an online talk, workshop or experience, and learn how to reconnect with yourself, your surrou…