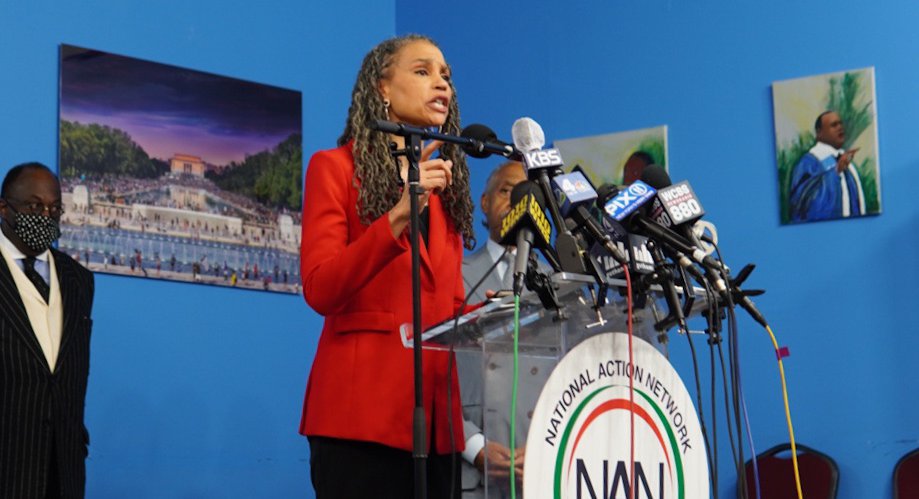 In a show of unity that drew on their oratory skills, six leading New York City mayoral hopefuls on Thursday turned out in Harlem to condemn the recent spate of brutal violence against Asian Americans.

Reverend Al Sharpton, who is considered one of the city’s most influential Black power brokers, offered the candidates a platform at his National Action Network (NAN) headquarters to speak following the killings of eight spa workers — including six Asian women — in Atlanta by a white gunman. Thursday marked the second public mayoral event Sharpton has hosted in what is still considered a wide open race. Back in January, he invited the candidates to speak at his annual public policy forum commemorating Martin Luther King’s Birthday.

With a sense of tragedy hanging over the country, the candidates, one by one, expressed their sorrow, anger and protest against attacks perpetuated against Asian Americans in the wake of the pandemic. At the same time, some of them used the opportunity to spell out the policies that they said they would institute as mayor to combat hate crimes.

“We’ve seen this play out too many times in our city,” said City Comptroller Scott Stringer, who called for a “community-led safety plan.”

“That’s where I want to put my efforts,” he said.

Andrew Yang, who held his own press conference on Wednesday to address the incidents, drew on his personal experience as an Asian American.

Yang said he “vividly” remembered growing up with “this constant sense of invisibility, mockery, disdain—a sense that you cannot be American if you have an Asian face.”

At one point, the former tech entrepreneur choked back tears. He called on the city to provide full funding for the NYPD’s Asian Hate Crimes Task Force.

Several candidates, including Shaun Donovan, the former Obama administration housing secretary, used the opportunity to castigate former President Donald Trump for inciting racial violence during his four years in office. He said that he had used a meeting this Monday with the Wall Street Journal’s editorial board to criticize the newspaper for “normalizing a president who called COVID-19 ‘the China virus and kung flu.'”

“We need to stop explaining away the hate behind these crimes,” he continued, “and call them what they really are—acts of terror.”

Ray McGuire, the former Citigroup executive, invoked Martin Luther King’s famous “Letter From Birmingham Jail,” which was written while King was jailed for protesting in 1963. “He told us that injustice anywhere is a threat to justice everywhere,” he said, adding, “What we have witnessed for far too long about which there has not been an outcry is anti-Asian [violence].”

Maya Wiley, a former civil rights attorney, also drew on the country’s history of racial violence against Black citizens, delivering perhaps the most fiery remarks of the event.

Referencing a remark by a Georgia law enforcement office who described the suspected gunman as having “a really bad day,” she said, “Really? Cause some people had no day at all because they were dead.”

She compared the killings of the spa workers to the those of Eric Garner and George Floyd, two Black men whose deaths at the hands of white police officers spurred the Black Lives Matter Movement.

Toward the end, she alluded to frequent criticisms of Yang during the campaign that questioned his authenticity as a New Yorker.

“Andrew Yang, you have a home here,” she said, adding, “Everyone is a New Yorker who resides in this city.”

At Al Sharpton’s NAN headquarters in Harlem where mayoral candidate @mayawiley gave one of the most stirring speeches. At one point she alludes to the digs @AndrewYang has received about whether he’s a “real New Yorker.” Wiley says, “Andrew Yang, you have a home here.” pic.twitter.com/MoVOViOoCD

Aside from offering a forum for the mayoral contenders, Thursday’s event was a display of unity between New York City’s Asian American leaders and the Black community.

Jo-Ann Yoo, the executive director of the Asian American Federation, recalled once telling Sharpton, “If anything ever happened, you’re going to be one of the first people I call.”

Following the shootings, she said, “He called me before I could call him.”

Sharpton himself began the news conference by urging Black residents to take “a strong unequivocal and united stand” against anti-Asian hate crimes by drawing on their own experiences with racial violence. “We know hate so well,” he said, adding that he planned to ask Black churches to address the violence against Asian Americans.

He also sharply criticized the reluctance by enforcement officials in Atlanta to say that the attacks were racially motivated, saying, “If it looks like a duck and quacks like a duck, it’s a duck.”

The Rubin Museum’s new exhibition on Tibetan Buddhism, called Awaken, is made up of 37 artworks from…

Major construction on East Side Access located under Grand Central Terminal is complete. The 15-year…