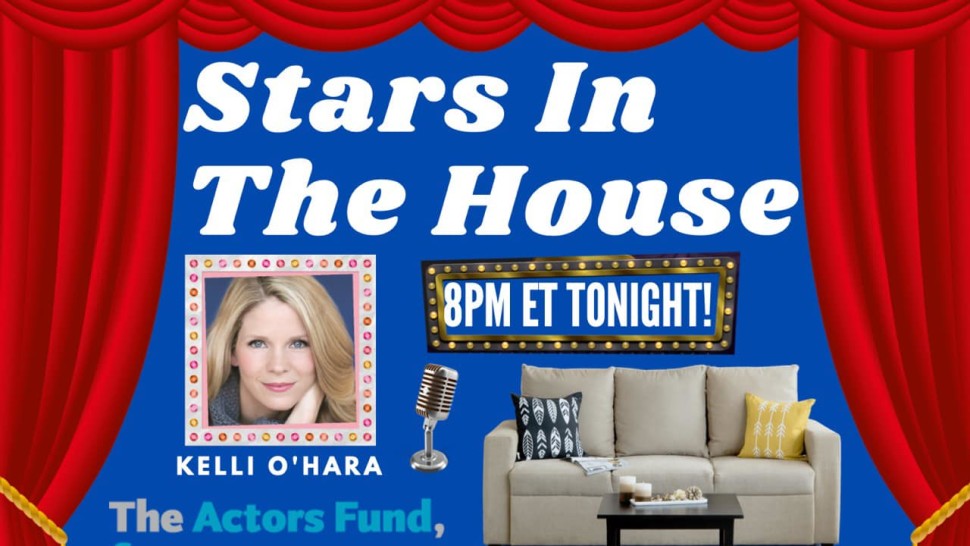 It’s now past the one year anniversary of Stars in the House! You can watch our more than 350 shows here. Broadway shut down on Thursday, March 12, while James and I were in Texas doing a political fundraiser. When we got back to NYC that Friday, we went upstate and hunkered down. On Saturday, I saw a tweet from Jennifer Cody that stated how The Actors Fund was going to need help because everyone was out-of-work.

I told James we should do an online concert with some stars and ask the viewers for donations to the Actors Fund. He told me he thought we should have chatting in between the songs, too. I asked Kelli O’Hara (who also did our very first Concert For America and, later on, my very first The Seth Concert Series) and she said “Yes” right away. I didn’t know how the tech would work and figured I would FaceTime her and then live stream me and James—and hold the iPhone with Kelli up to the screen. That was my amazing tech idea.

Thankfully, James called our friend David Katz. David is a musical theater major at the Hartt School of Music at the University of Hartford but always volunteers for our concerts. He offered to help us with the show, then he and James started looking for a better tech set up. They discovered StreamYard where you can not only do a split screen (which seemed magical to us) but it could also stream to various platforms (Facebook, YouTube, Periscope, etc.) and it could show photos and videos. We were in the middle of working on a hand-washing song as commissioned by Dr. Jonathan LaPook for CBS and when we mentioned our Actors Fund live stream, he offered to join us. I retold the whole “making of” in this column from September. The amazing news is the show has now raised three-quarters of a million dollars! See above for the promo for the very first show.

We had Kristin Chenoweth on last Saturday’s show and, speaking of The Actors Fund, I found a video from when I first conducted her at the first big Actors Fund benefit I ever did. Catherine Cooke and Tim Pinkney asked me if I would conduct their fundraiser for the Christopher Reeve Foundation and I said yes-ish. I had actually not conducted for a while because I was working as a comedy writer on The Rosie O’Donnell Show at the time and I was nervous that I no longer “still got it.” But I decided that I should go for it and I wound up loving it. Here’s Kristin with her hilarious and high-noted “Glitter And Be Gay” from Candide. (Note: there are definitely moments when I’m not together with her and there are crazy sound balance issues where the bass part gets outrageously loud for no reason. These one-night-only events are scary because you’re so under-rehearsed. Kristin, however, sounds amazing!)

Speaking of one-offs, I did my live concert last week with Emily Skinner and we were talking about the Actors Fund concert of The Best Little Whorehouse In Texas that we did in 2006. It starred Emily, Bob Martin, Terrence Mann, and Jennifer Hudson. We actually did it after Jennifer had filmed Dreamgirls, about two months before the movie was released and 5 months until she won an Oscar. If only we could have waited, we would have doubled our ticket sales. Here’s Jennifer singing up a storm.

Emily and I talked about how much we loved Whorehouse and she decided to sing Miss Mona’s Act Two song “The Bus From Amarillo,” which she hadn’t done since 2006. You have to watch it. I feel Emily is one of Broadway’s greatest actresses. Here she is.

This coming Sunday, I have the hi-larious Jackie Hoffman in concert. She sent me a bunch of songs she’s going to do and just the titles alone were making me laugh. The one about riding the subway is called “Stop Making Out (In Front of Me)” and the one about her various roles in Hairspray (which she complains didn’t actually add up to a lot of stage time) is called “Three Minutes on Broadway.” Here’s Jackie doing one of my Obsessed videos. See our show on Sunday at 3 or 8 PM ET—tickets at TheSethConcertSeries.com.

On Friday on Stars in the House, we had a game night featuring people who were doing shows when everything shut down. Carolee Carmello told us that she was starring in the national tour of Hello, Dolly! and, on that Thursday, was doing one of her signature photo shoots. If you don’t know, Carolee would find photos of women who’d played the role (Ethel Merman, Ginger Rogers, Pearl Bailey, etc.) and recreate the photos they’d taken. Carolee was recreating one that Carol Channing had done on a bike, and after getting the photo, a man leaving the box office recognized her. He told her he was so disappointed because he had bought tickets to the show, but now wasn’t going to be able to see it.

Carolee freaked out that the show was canceled, but he assured her that he wasn’t able to see it because another commitment had come up. Phew! A few hours later, the show was canceled. We don’t know if that man was a psychic, an angel, or Jeane Dixon, but because of him, Carolee wound up having two moments in one day where she had to feel the devastation of the show closing. She’s most upset because the cast never got to have closure. When you’re doing a show, there’s always the final wind down where you’re saying “This is the last time I’ll sing this song…” or “This I the last time I’ll say that line.” Instead, the cast was doing their tour and it suddenly ended.

Carolee and I go way back in terms of supporting the Actors Fund. Here she is in the Funny Girl concert that Peter Flynn directed and Dev Janki choreographed back in 2002. We had a different star playing Fanny Brice for each scene/song with Sutton Foster, Idina Menzel, LaChanze, Kristin Chenoweth, Lillias White, Judy Kuhn, Andrea Martin, etc. Carolee said they were all sharing the same dressing room and poor Carolee’s song was last. She told us that every ten minutes one of them would leave and then return in complete triumph. Carolee sat there listening to each one of the them sound amazing on the backstage monitor as she frantically kept applying more and more lipstick. Finally, she went out for the 11 o’clock number and brought the house down. Watch her and then peace out!

From Falsettos to Hello, Dolly!: Celebrating Carolee Carmello on the Stage

For the past year, most of New York City’s vibrant arts industry has either disappeared or bee…