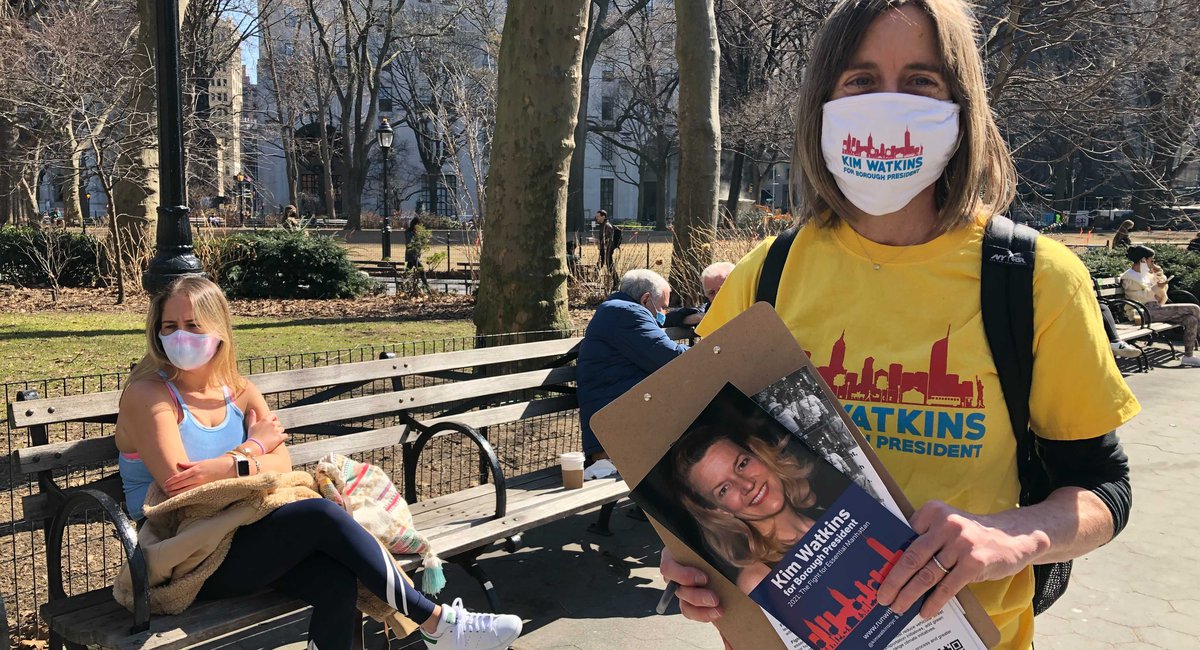 Volunteer Rachel Pratt was doing laps around Madison Square Park on a recent morning, trying to collect signatures for Kim Watkins, a candidate for Manhattan Borough President. In her various loops around the crowded park, she convinced just one person to sign; Watkins needs 1,200 signatures by March 25th to get on the ballot.

“I got to finesse my ask, I got to up my game,” Pratt said, reevaluating her icebreaker language before approaching more strangers lounging on benches or scarfing down a bagel. “It’s a pandemic and people have reservations about getting too close and having conversations.”

It’s a historic election season in New York City on a number of levels. More than 500 candidates are running for mayor, comptroller, public advocate, borough president, district attorney and city council districts all across the five boroughs. But they won’t make it on the ballot without gathering enough valid signatures from New York City voters. And getting a stranger to stop, approach, and sign something, in the midst of a pandemic, is a lot to ask.

Happy Monday! I hit the streets early this morning petitioning with #TeamRay on the Upper West Side. Thank you to everyone who signed. Stay warm out there! 🙏🏿❤️ pic.twitter.com/Fza4T0tp1A

“People are having a much harder time getting signatures but by and large are managing,” said Susan Steiner, an election lawyer, who is representing about a dozen candidates this cycle. “Everybody’s doing OK, but there’s a lot of stress involved.”

Earlier this year, more than 100 candidates sued to halt the signature requirements, citing the potential risk of spreading COVID-19 — but a judge ruled against them last month. As a result, thousands of campaign workers and volunteers have fanned out across the five boroughs, lingering around parks and subway stops, as well as going door to door, to collect the signatures they need.

State lawmakers, acknowledging the pandemic, lowered the number of signatures needed for candidates to qualify; citywide races like mayor, comptroller or public advocate need to collect 2,250 signatures, down from 3,750. County or borough-wide races, like district attorney or borough president, need 1,200 signatures and City Council candidates have to collect 270 names. But they have a shorter time period in which to get them, three weeks instead of six.

Steiner said in a normal year candidates might try to get four times as many signatures as the minimum threshold, just in case opponents challenged the signatures and they get thrown out. But most of her clients abandoned that tactic, aiming for about twice what they need before calling it quits.

“There’s an urgency to get out on the street or into the buildings to ringing doors is compressed into a shorter period, so it wasn’t really a boon for many of the New York City candidates,” Steiner said.

After experiencing mild symptoms, I got a COVID test today & it came back positive.

We ended petitioning Sunday after reaching our goal to avoid putting our volunteers & neighbors at further risk, but I’ve contacted folks I saw over last few days & want to let everyone know.

Lincoln Restler, a candidate for City Council’s District 33, which includes Brooklyn Heights, the Navy Yard, and Williamsburg, said they tested positive for COVID-19 after spending a weekend collecting signatures.

Former mayoral candidate General Loree Sutton cited the signature requirement as one of the reasons she exited the race, saying she had “deep concerns and reservations about the health risks of the petition process and was loathe to ask her staff, volunteers or supporters to participate,” though a spokesperson conceded the campaign had other challenges as well.

City Council candidate Tiffany Cabán recently tweeted her rage, after getting the signatures she needed.

“Every single day was cause for anxiety for everyone who was put at risk in the process,” she said. “I am unapologetically angry…With the stroke of a pen, Cuomo could have prevented this entire situation.”

The office of Governor Andrew Cuomo didn’t return a request for comment immediately. Spokesman Rich Azzopardi previously defended the state’s move to lower the signature threshold but not halt the petitioning process altogether.

With petitioning this year, @NYGovCuomo presented us with a false choice; our health or our democracy.

I’m going live at 7 to discuss. See you there. pic.twitter.com/Lh98fIWoLZ

Some candidates, like Tahanie Aboushi who is running for Manhattan District Attorney, called on other candidates to promise not to challenge each other’s signatures, citing the difficulty of collecting them this year.

Election attorneys, campaign staff, and volunteers often spend days haggling over the veracity of signatures to try to chip away at opponents’ lists in order to potentially keep them off the ballot, a tradition upheld even last year at the height of the pandemic.

Back in Madison Square Park, Pratt’s second signature of the day came from a fellow petition-gatherer working for a candidate in a different race, Tali Farhadian Weinstein who’s running for Manhattan District Attorney.

“I know what it’s like,” said Sacha Gross, bending over Pratt’s clipboard. “I’ll use my own pen.”

Nearby, David Estrada was also collecting names for Farhadian Weinstein, calling himself a “gun for hire.”

“Whoever pays me the highest I collect signatures for, honestly,” Estrada said, adding he tries to sanitize his pen and clipboard regularly but he understands if people are reluctant to let him approach.

“It’s ridiculous,” he said. “I wouldn’t stop for myself if I was walking the street.”

Everything You Need To Know About Signing A Petition ✍️

You can sign whatever you want, but your name might get thrown out if you don’t fit the right criteria. You have to be registered with the party line the candidate is running on, and you have to live in the district where they’re running. Any registered Democrat in the city can sign petitions for citywide races, like mayor, comptroller and public advocate. You have to be registered in Manhattan, for example, to have your signature count for Manhattan District Attorney or Manhattan Borough President and for City Council races, you must live in the candidate’s district.

Yes, but not for more than one candidate in the same race. If you sign for two candidates in the same race, say two different mayoral candidates, the one you signed second could get thrown out if it’s challenged through the verification process.

There’s a candidate I want to support, how can I sign their petition?

There’s no online option. You have to track down a candidate or their campaign staff in real life to be able to sign. Check your preferred candidate’s website and Twitter feed for updates on where and when their volunteers will be out collecting signatures.

Do I have to vote for the person whose petition I sign?

Nope! A petition signature just helps the person get on the ballot. Nothing more. You can vote for whomever you want when primary day rolls around on June 22nd. And remember ranked choice voting means when the big day comes you don’t necessarily have to settle on just one candidate for most races.

Roadside Attractions has acquired Rita Moreno: Just a Girl Who Decided to Go For It, the new documen…

Read on for some recent theatre headlines you may have missed in today’s news. Barbra Streisan…