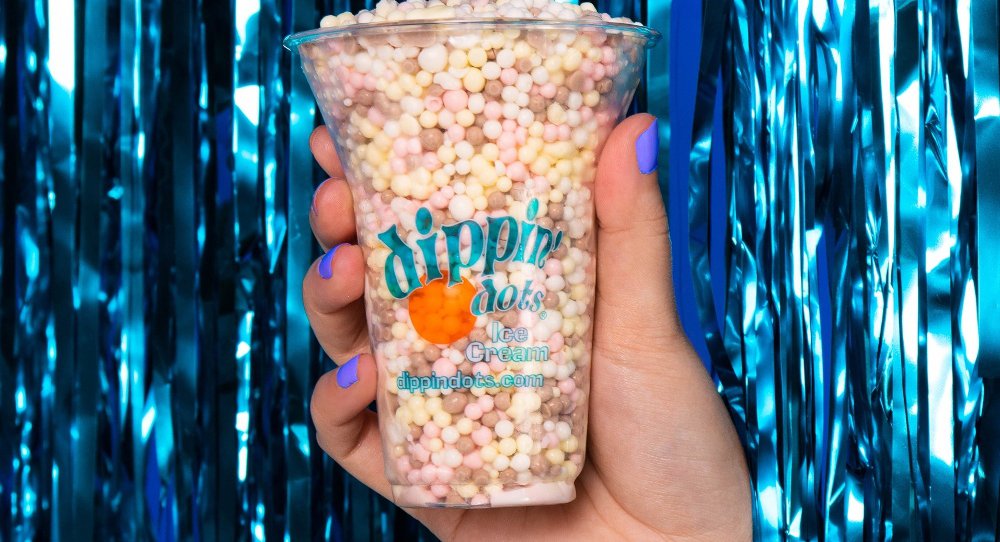 The wondrous space age frozen dessert product Dippin’ Dots (the “Ice Cream of the Future”) was discovered in 1988 by microbiologist and cryogenic specialist Curt Jones in his parents’ Illinois garage. Like many of mankind’s greatest scientific breakthroughs, Dippin’ Dots were created by accident, while Jones was searching for a more efficient form of cow feed. Instead, he stumbled upon the sensational flash-frozen snack product beloved by millions of shopping mall customers in the 1990s.

Those of us still longing for the original Dippin’ Dots of the Clinton era (long before the company was gobbled up by gourmet popcorn purveyor Doc Popcorn) may experience something similar today in texture if not flavor, when an equally wondrous substance called “graupel” descends upon New York. NY1 meteorologist John Davitt broke the news this morning when he published this explanatory tweet about graupel, comparing the icy sky product to Dippin’ Dots.

For more on this, we turned to National Weather Service meteorologist Dr. Dave Radell, who confirmed there is in fact a chance of graupel in NYC this afternoon.

“Folks may see flurries and a couple graupel pieces as the afternoon wears on,” Radell told Gothamist, explaining that graupel “starts off as snow and ends up as a little tiny piece of ice or mushy ice.” He said it happens in NYC on average a couple of times per year.

So what exactly turns a snowflake into graupel? Similar to the liquid nitrogen that transforms a boring pellet of ice “cream” product into a fun Dippin’ Dot, clouds containing extremely cold water “rime” the snowflakes as they pass through. Sufficiently rimed snowflakes become graupel.

“Riming is the process by which super cool water accumulates on these snowflakes,” Radell said. “They eventually fall to the ground as little pieces of ice. On days like today, when have a little bit of super cooled water in some of these clouds, these flakes can get rimed to become graupel.”

Perhaps seeking to prevent a stampede of frenzied graupel hunters trampling each other on NYC sidewalks, Radell sought to downplay today’s forecast, saying, “We’re not expecting a huge graupel event but folks may see some of that graupel.”

Asked if graupel is just like basically Dippin’ Dots, Dr. Radell said, “It’s a good analogy, but Dippin’ Dots are perfectly spherical, while if you examine some of these graupel pieces their shapes are usually more irregular and jagged and has a non-spherical sort of shape. If they melt they could be a little bit squishy in consistency.”

Okay but can we eat the graupel? Does it at least taste similar to Dippin’ Dots? When can we go outside, rip off our masks, and Taste the Fun™ again?

Our conversation ended shortly thereafter. Nevertheless, VICE Life Editorial Director Casey Johnston, while perhaps not technically a meteorologist, confirmed that NYC is currently cloudy with a chance of Dippin’ Dots. This photo was taken in her back yard in Bed-Stuy just hours ago:

Shakespeare In The Park Returns To The Delacorte For Summer 2021