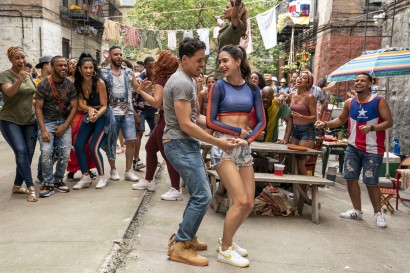 The In the Heights movie teased fans with the promise of a new trailer this weekend, and all that paciencia y fe appears to have been paid off; the film dropped two new previews March 14. Take a look ahead of the film’s June 18 premiere.

The first of the new trailers, which director Jon M. Chu has dubbed “Powerful” (above), primarily showcases the high-energy showstopper “96,000” and Chu’s expansive, fantastical approach to the musical theatre format. Trailer 2 (below) isn’t short on spectacle either, while also highlighting the various sueñitos and intimate connections between Anthony Ramos’ Usnavi and his fellow denizens of Washington Heights community.

Both trailers preview an element of expansion to the movie’s source material (Lin-Manuel Miranda’s Tony-winning Hamilton predecessor that opened on Broadway in 2008). “The play is set on the block, so the stage is the block,” explains Quiara Alegría Hudes, who wrote the show’s book and returned to pen the screenplay, at a recent preview event. “But these characters, like Usnavi, his body’s on the block, but half his heart is in [the Dominican Republic]. So the camera can go there in a way the stage can’t.” Both trailers show Usnavi in the Caribbean, waxing poetic about the Manhattan neighborhood to a younger generation.

Miranda also acknowledged the Chu’s ability to “pan out,” as it were, to the full extent of the characters’ sueñitos: “Jon dreamed bigger than any of us dared to dream in terms of the size and scope of this. This is a big movie musical. I think we’re so used to asking for less, just to occupy space as Latinos. ‘Please let us make our little movie.’ But Jon, every step of the way, was like, ‘No, this is a big movie. These guys have big dreams. We’re allowed to go that big.’”

Miranda himself also appears in both trailers—in his cameo as a beloved character of the musical: the Piragua Guy.

The film was originally slated for a June 26, 2020, cinematic release, though those plans were of course scrapped in the wake of the pandemic. In December, Warner Bros. announced it would simultaneously premiere its 2021 slate (In the Heights included), in theatres and on HBO Max, where they’ll be available for 31 days. Other titles in that rollout include the already released Judas and the Black Messiah and Tom & Jerry, plus Dune, The Matrix 4, and The Suicide Squad.

WATCH: The 1st Trailer for the In the Heights Movie

In addition to Ramos and Rubin-Vega, the movie stars Corey Hawkins as Benny, Melissa Barrera as Vanessa, Leslie Grace as Nina, Olga Merediz as Abuela Claudia (reprising her work from the stage), Stephanie Beatriz as Carla, Dascha Polanco as Cuca, Gregory Diaz IV as Sonny, Marc Antony as Sonny’s father, Jimmy Smits as Kevin Rosario, and Noah Catala as Graffiti Pete.
“We’ve had a hard year, but this movie has so much joy, so much passion, so much community, so much hope in it,” promises Chu. “It pours out of every frame.”

It won’t be long now…

A Letter to Harvey Milk, the Off-Broadway musical seen at Theatre Row in 2018, will be streamed Apri…

Read on for more theatre news you may have missed in today’s headlines. Danai Gurira Returns t…