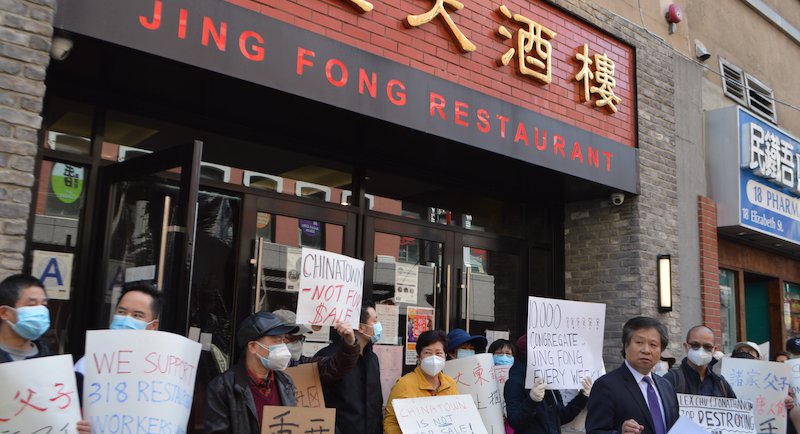 Community organizers and workers at the Jing Fong restaurant in Manhattan’s Chinatown have proposed a bold plan to save the legacy of the storied dim sum banquet hall, by taking over the restaurant’s lease through a workers’ collective ownership plan and launching a new eatery there.

At a press conference outside Jing Fong’s multi-story space at 20 Elizabeth Street Friday, organizers from the restaurant’s union and from community groups said their plan would help save the jobs of roughly 100 employees who could stay on at the new restaurant. They also see this as a chance to support the local Chinatown economy through tourism generated by the appeal of a popular restaurant. At its pre-pandemic height, Jing Fong was drawing about 10,000 customers a week, according to union representatives.

The workers’ union and other supporters have called for saving the workers’ jobs since the owners, the Lam family, announced last month they were closing its indoor dining service after 43 years, citing the pandemic-driven loss of revenue and the inability to pay rent on its 20 Elizabeth Street lease.

The restaurant owners said they plan to continue delivery and takeout service as well as outdoor dining at its Elizabeth Street site. Part of the decision was driven by their inability to pay rent on the space — Eric Phillips, a PR representative for the landlord Jonathan Chu, has said the restaurant owners hadn’t paid rent since March 2020.

“We don’t want to just run a restaurant, we want to make the Jing Fong experience even better,” said community organizer Don Lee in a phone interview.

The plan would make Jing Fong, one of the few unionized restaurants in the city, a high-profile example of a collectively-owned business. Last year, Mayor Bill de Blasio announced new resources to help struggling businesses convert from single-ownership to employee-owned structures that can come with tax benefits and higher return on profits: “employee-owned businesses create a tremendous reality of equity and fairness, of buy-in, of opportunity to create capital and have an ownership stake that changes the whole reality, particularly for working class folks and particularly in communities of color,” de Blasio said at a press conference in December.

Some of the details of the plan remain unclear, Lee acknowledged, including the amount of money needed to set up the collective ownership plan and to restore the space. He said the Lams have already decided to give up the 20 Elizabeth Street lease, so the space will be available to operate a new restaurant there.

An email sent to a member of the Lam family for comment was not answered Friday.

“The Chu family has been a part of the Chinatown community for generations – and they always will be. While we are still in the process of determining what is next for this unique space, there is no doubt that we will require the future tenant to contribute to the vitality and health of our community. We are looking forward to the next chapter at 20 Elizabeth St.,” said Phillips, the representative for the family who owns the building, in a statement.

Nelson Mar, president of the 318 Restaurant Workers Union, said he supports Lee’s vision and urged the landlords of the building to agree to their plan.

“This is the right thing for them to do,” Mar said. “They should immediately sit down with Don and his crew to chart a path for opening a restaurant, back up in that space.”

If the new collective ownership plan succeeds, the restaurant will likely need to have a different name, Lee said, since the Lams have a second Jing Fong location on the Upper West Side that has remained open.

Lee also said the final dollar amount necessary to implement this plan will depend on whether they receive funding from the city, and he pledged that funding will go towards paying the back rent owed to the Chu family.

More than just a dim sum banquet hall, Lee said he envisions a brand new multi-sensory concept at 20 Elizabeth Street. “We’re going to use the extra space in Jing Fong for visual art exhibitions,” he said, as well as staging live productions while diners eat.

“We’re looking for a win-win-win,” Lee added. “The workers save their jobs, New York City and the community has the anchor store and the landmark that Jing Fong is to continue to operate, and the landlord will get the rent.”

1922 Comedy team Potash and Perlmutter are Partners Again. The show plays 31 weeks at the Selwyn The…